Mengele and the Culture of Death is alive and well in the 21st century. 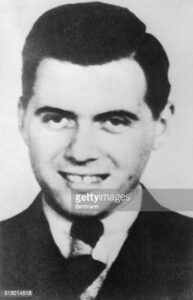 Mengele and the Culture of Death is alive and well in the 21st century.

We live in a culture of death and disfigurement.

We should all know about Mengele and his immoral, unethical, evil, barbaric experiments on human beings, particularly the Jews; particularly twins, during the Holocaust. We were to have learned from those “experiments” that doctors must be overseen. Not all are ethical. That not all procedures are acceptable. That we must, as a society, say no to unproven medical practices, especially on children.
We didn’t learn.

First a reminder of some of Mengele’s experiments.

Abandoning medical ethics and research protocols, Mengele began conducting horrific experiments on up to 1,500 sets of twins, many of them children. Dr. Josef Mengele turned twins into unwilling medical subjects in experiments that exposed about 3,000 children at Auschwitz-Birkenau to disease, disfigurement and torture under the guise of medical “research” into illness, human endurance and more.

The Nazis believed that selective breeding could be used to encourage socially acceptable behavior and wipe out undesirable tendencies.

Mengele usually used one twin as a control and subjected the other to everything from blood transfusions to forced insemination, injections with diseases, amputations, and murder. Those that died were dissected and studied; their surviving twins were killed and subjected to the same scrutiny.

Yet, here we are in the 21st condoning procedures, that in my humble opinion, do not follow the Code. Rather, they promote the evil that Mengele committed. Attacks on the sanctity of life.

Let’s look at abortion first. Third term abortion? This is OK? It’s OK to cut off the limbs of babies in utero knowing they feel pain? There are very few third term abortions, yet it seems government officials are desperate to promote it. Why? Or how about abortion at birth-or just after?

And then there is Stacey Abrams suggesting abortion helps fight against the adversities of inflation!

Why is abortion the most important issue for Biden and the Democrats?

Wait, in Quebec, Canada, they want to euthanize babies who are born with major problems. Kill them? Remember when we approved of limited abortion. What will happen with euthanasia of new born babies; what age will be considered new born? Two?

In 2019 the Council of Canadian Academies looked at the possibility of extending medical assistance in dying (MAID) to ‘mature’ minors — people under age 18 considered by doctors to be capable of directing their own care — people with psychiatric conditions and those making requests in advance. Eighteen year olds. Not old enough to drink or carry a gun. But old enough to know that death is the right way to solve their mental illness.

Quebec also wants to expand MAID-medically assisted death-once for terminally ill people with one foot in the grave, to children.  The Medical College supports extending MAID to 14- to 17-year-olds and encouraged more public discussion about endorsing euthanasia for seniors “tired of living.”  How quickly will that can change to encouraging old people to die so they won’t be a burden to their families.

In March 2023, Canada will become one of the few nations in the world allowing medical aid in dying, or MAID, for people whose sole underlying condition is depression, bipolar disorder, personality disorders, schizophrenia, PTSD or any other mental affliction. Interesting isn’t it that the idea that mental illness might make someone eligible for state-sanctioned assisted death had long been forbidden ground in Canada’s euthanasia debate. Oh, the times they are a changing.

A 54-year-old man from Ontario, Amir Farsoud, is applying for Canada’s state-sponsored euthanasia program, Medical Assistance in Dying (MAiD), because he is about to lose his house and does not want to be homeless.

Which proves, once again, when you open the gates to killing, the possibilities never end.

We are living in the time of the Killing Fields.

Does this not ring of Mengele to you? The lack of respect for life? God commanded us to CHOOSE life. It wasn’t a suggestion.

And now we have transgender care. That it is impossible to change one’s sex does not matter – it’s about feelings and not fact. Why is that? How did we get here? And how did we get to a place where government is involved in decision making, overruling parents? In Virginia  Del. Elizabeth Guzman (D) has a planned bill that would expand the definition of child abuse to include parents who are not willing to “affirm” their child’s stated gender identity or sexual orientation. Penalties could range from misdemeanor to felony abuse charges for parents and implied a goal of damaging the reputations of these parents if they do not follow the prescribed gender ideology.

So what is gender affirming? Is it benign? Is it safe?

It is certainly profitable. Estimates place the average cost of transition at $150,000 per person. Multiply that by an estimated population of 1.4 million transgender people, this is a market in excess of $200B. That is significant.  That’s larger than the entire film industry. Now, does that include Big Pharma costs for hormones?

But now, these expert doctors remove the clitoris and turn it into the tip of a fake penis. Then these experts remove the vagina, the uterus, the fallopian tubes the ovaries and the breasts. But that’s OK. And in boys, they remove the penis and turn the tip into a clitoris. Make a fake vagina add some labia and some breasts. Voila-a girl.

In addition to the many private practices that offer gender-affirming surgery, there are now at least 30 academic medical centers in the U.S. that have a transgender surgery program.

You cannot change the sex of anyone. Every cell in the human body carries the chromosomes of their birth sex.

Gender care for minors gained further legitimacy as medical groups endorsed the practice and began issuing treatment guidelines. Chief among them is the World Professional Association for Transgender Health (No surprise – associated with the World Economic Forum),  a 4,000-member organization that includes medical, legal, academic and other professionals from around the world. Over the past decade, its guidelines have been echoed by the likes of the American Academy of Pediatrics and the Endocrine Society, which represents specialists in hormones.

At least 121,882 children ages 6 to 17 were diagnosed with gender dysphoria in the five years to the end of 2021. More than 42,000 of those children were diagnosed just last year, up 70% from 2020.  (Could it be all that Woke propaganda in school and the influencers on social media?)

Where are the longitudinal studies on the efficacy of this mutilation?

Did you know that we know complications from genital surgeries are common? A California study found that a quarter of 869 vaginoplasty (removal of male sex organs and replacement with a vagina)patients, with a mean age of 39, had a surgical complication so severe that they had to be hospitalized again. Among those patients, 44% needed additional surgery to address the complication, which included bleeding and bowel injuries. Here is a link to photos that show the surgeries. All you excited parents promoting your child’s desire to change sex, take note.

What about the hormone blockers and the hormone replacement drugs – for life. Are there any side effects? Does anyone know? Does anyone care? Or is this just a massive Mengelian experiment? While the number of gender clinics treating children in the United States has grown from zero to more than 100 in the past 15 years – and waiting lists are long – strong evidence of the efficacy and possible long-term consequences of that treatment remains scant.  In 2016, the FDA ordered makers of puberty blockers to add a warning about psychiatric problems to the drugs’ label after the agency received several reports of suicidal thoughts in children who were taking them (but I thought the surgery reduces suicide?). More broadly, no large-scale studies have tracked people who received gender-related medical care as children to determine how many remained satisfied with their treatment as they aged and how many eventually regretted transitioning.

The United Kingdom is shutting down its main clinic for children’s gender care and overhauling the system after an independent review found that some staff felt “pressure to adopt an unquestioning affirmative approach.” Read more here.

Dr Annelou de Vries, a specialist in child and adolescent psychiatry worries about the growing number of children awaiting treatment, but the graver sin is to move too fast when puberty blockers and hormones may not be appropriate.

“The existential ethical dilemma in transgender care is between on one hand the (child’s) right for self-determination,” de Vries said. “On the other hand, the do-not-harm principle of medical intervention. Aren’t we intervening medically in a developing body where we don’t know the results of those interventions?”

Some scientists and doctors also say they wonder about possible neurological effects of puberty blockers. The question: Hormones released during puberty play a major role in brain development, so when puberty is suppressed, can that result in reduced cognitive function, such as problem solving and decision making? The New York Times(THE NYTIMES!!!!!) reported in May 2021 that “more research is needed to fully understand the impact [puberty blockers] may have on certain patients’ fertility. There is also little known about the drugs’ lasting effects on brain development and bone mineral density.”

Even the Biden administration is questioning hormone treatment  at the same time as it describes state bans on puberty blockers and hormone therapy for minors as “bullying disguised as legislation” and an attack on “lifesaving health care.”

Meanwhile, the American Academy of Pediatrics (AAP), American Medical Association (AMA), and the Children’s Hospital Association (CHA), collectively representing more than 270,000 physicians and medical students, and CHA represents more than 220 children’s hospitals across the country, sent a letter to AG Garland asking him to investigate and prosecute those who disagree with their practices on treating gender dysphoria in children.

So government is involved as it was during the time of Mengele.

This despite the fact many doctors acknowledge that long-term hormone therapy may reduce fertility, and they say children who receive puberty blockers followed by hormones run the highest risk. But with no definitive science to rely on, doctors often leave the question open when talking to children and their parents.  So, just when you need doctors to share the possible repercussions, they remain silent.

There is also a lack of clarity on the issue of “detransitioning,” when a patient stops or reverses the transition process.

Despite grave concerns, medical schools are ramping up this field.

It’s time to ramp up gender education in medical schools for the next generation of doctors.”

You know life has gone terribly awry when Catholic Georgetown University is also promoting these practices.

There are those who may take umbrage with me for comparing today’s medical ethics with the time of Mengele. Mengele was evil. The Nazi regime was evil. We were to have learned from this behaviour. We didn’t. Our medical ethics have moved from life affirming to a death cult – be it abortion, end of life or the mutilation of children.

Perhaps today’s doctors should be considered worse. Because they should know better after we learned about Mengele.