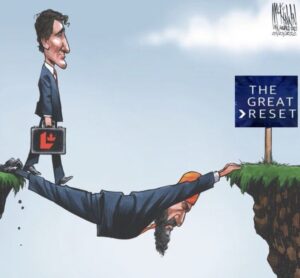 Justin Trudeau is truly Canada’s Clown Prince. And like Princes of yore, he too has a Court Jester: Jagmeet Singh; the leader of the Federal New Democrat Party 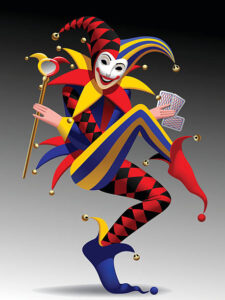 I have introduced you to Justin Trudeau many times. He is a sanctimonious, self-righteous, self-serving, immoral, unethical, inept, corrupt and evil man who has maligned millions of Canadians for not following his Covid rules.

The EU is not particularly fond of him, either.  A healthcare law review submitted to the European Parliament in May took aim at the Canadian government for having some of the strictest Covid-19 restrictions in the world which are being met with increasing international scrutiny. Independent Irish Senator Sharon Keogan said: “The extrajudicial freezing of assets and transactions by the Canadian government of individuals deemed associated with anti-government protests provides a chilling case study in the abuse of centralized power.” Keogan also blasted Trudeau’s “so-called liberal democracy” for showing authoritarian leanings by banning unvaccinated Canadians from travel.

And multiple US senators have demanded that Canada be added to a Special Watch List for countries that violate religious freedom rights!

Let’s get back to Singh, the Court Jester.

The medieval court jester had an important role to play in keeping the king happy. He received a handsome amount of money for his services and enjoyed a permanent place of residence. The foremost responsibility of a medieval court jester was to entertain the king and uplift his mood during sad moments. The jesters followed their masters wherever they went and delivered messages – no matter how dangerous the journey – wherever they needed to go Jesters were subject to the mercy of the court, and were expected to put on a good show, not just a show.

Well, I can assure you that this jester is doing a great job. He has uplifted the Prince by bending his knee to the Clown’s decrees. No matter what Justin wants, Jagmeet will give, and the Clown Prince will accomplish his desire: to be a tyrant and follow the call of the World Economic Forum rather than the will of the Canadian people.

Jagmeet  has uplifted Justin’s  mood by accepting a deal with him, a deal that will enable the  Liberal minority government to stay in power until the House of Commons rises in June 2025 to prepare for Canada’s next fixed election date Oct. 25, 2025. He did this after stating clearly: “There’s not going to be any coalition at all.” A tad immoral, a bit unethical. Perfect fit for Trudeau. Normally, in Canada, one has to win the majority of seats to stay in power for the full five years. But, not this time.

This the first time in Canada’s history this type of deal has been made.  In Canada, the PM is typically the leader of the party that has the most seats in the House of Commons.   If no one party gets a clear majority of seats, they reach out to others in a “compact” to rule together.  The PM knows that it will not necessarily be clear sailing for his party platform, because he must get the approval of the other party in the coalition or from Members of the opposition. It is a type of checks and balances.

Jagmeet, the Jester, broke the “checks and balances.”

Conservative MP, Candice Bergen stated “This deal means that Canadians have woken up to, in essence, an NDP-Liberal majority government.”

Got to love Trudeau. He said:

“I’ve thought long and hard about this. It was not an easy decision. With so much instability around us, Canadians need stability.”

Right. Stability. For his decrees.

Although the Prince and Jester have been heckled ruthlessly for their political positions, Jagmeet was so hurt by the verbal abuse, he called the police.  Oh…please. But wait – he took the spotlight off the Clown Prince who has been heckled everywhere, in Canada and Europe.

SIngh, a Sikh, was then heckled in Brampton, Ontario. Brampton is almost majority South Asian, with Sikhs being one of the most notable religious groups in the area.  Indeed, at the public meet and greet, nearly all of those heckling Singh were Indian Sikhs, upon whom Singh subsequently called the police. But he did, once again, take the spotlight away from Trudeau like a good court jester. 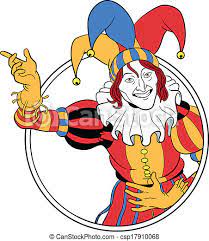 Truth be told, I’m not sure what Singh has received in his role but he has certainly given.

He will stand by as the internet is overseen by the government. Farewell free speech.

You can get cocaine, fentanyl, and heroin, legally in Singh’s home province of British Columbia but no one can board a plane without a vaccine.

In the meantime, the Jester and the Clown want to pass  Bill C-21 – preventing people from buying, selling or transferring handguns within Canada. Those who already possess a restricted firearm will be allowed to continue using it for target practice or sport shooting despite the fact that more than a dozen police officers have said this will not solve the problem of gun violence in Canada. Great virtue signaling to the Democrats in America.

I wonder what song and dance the Jester will perform to take the spotlight off the Clown Prince now that Canadians are worried about food shortages?

We know what Trudeau gained from this pact. But what about Jagmeet?

Why did Jagmeeet Singh sign up for the role of Court Jester? Truth be told, I have no idea why Jagmeet did this but there must be reason for him to play the Court Jester to the Clown Prince.