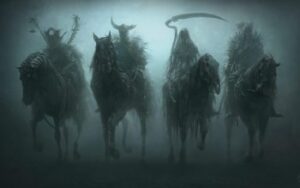 We are in a war. And it is not with Russia.

It is a far more serious war.

It is the World Economic Forum versus Western Culture.

It’s past time that we all learn about the WEF and the people behind it. The Four Horsemen of the Apocalypse: Klaus Schwab, Bill Gates, George Soros and Anthony Fauci, medical czar. Each one of them is EVIL. And each one is attacking our Judeo/Christian ethic that underpins our culture.

Here is more on George Soros of WEF and Open Society

I never thought I would be writing about the WEF because what I heard about it was so off the wall, it had to be a conspiracy theory. Why? Because it sounds like something from the Twilight Zone. Actually, the WEF sounds more like the future that George Orwell warned us about in his book 1984; written in 1949 – a warning about totalitarianism.

The WEF certainly fits his description.

It is about the intoxication of power.

“If you want a picture of the future, imagine a boot stamping on a human face—for ever.”

He warned us then and said: “Do not let it happen.”

All is not lost.

There is good news. Yes, the greatest threat to Western Culture is the World Economic Forum. But, the greatest threat to the World Economic Forum is the Judeo/Christian ethic that underpins our Culture.  Why? Because this ethic tells us that we have God-given rights and freedoms that no man can take away. And if you believe in that ethic: all people are born with equal intrinsic value, all life is sacred and we have FREE-WILL – moral agency, then you will not bend the knee to the values of the WEF brought to you by false gods.

We must protect our ethic!

I will share a few of the lessons I learned.

The WEF along with global companies; Blackrock and Vanguard are taking over. Vanguard and Blackrock bought all kinds of companies. Maybe the owners looked around and saw suffering and wanted to help. They wanted to make the world a better place for more people. Maybe they had great intentions. The road to perdition is paved with good intentions, let alone great ones.

Then, there are the Rockefeller Foundation and The Rothschild Foundation, busy providing input. Going out on a limb here, I am guessing the input helped them as well as all the “leaders,” companies and foundations associated with the WEF.

Perhaps that is how they have been taking over because people like me think the concept is so ridiculous.

We are all familiar with Build Back Better: that was Biden’s Cri de Coeur.

What is the origin of that fantastic idea?
The WEF

This mantra: “Build Back Better” has been declared around the world. To build back better, we must reinvent capitalism. Who is, what is, declaring this plan? The WEF

The World Economic Forum is the self-declared International Organization for Public-Private Cooperation: ruling with fear and by fiat.

“The World Economic Forum engages the foremost political, business, cultural and other leaders of society to shape global, regional and industry agendas.

“It was established in 1971 as a not-for-profit foundation and is headquartered in Geneva, Switzerland. It is independent, impartial and not tied to any special interests. The Forum strives in all its efforts to demonstrate entrepreneurship in the global public interest while upholding the highest standards of governance. Moral and intellectual integrity is at the heart of everything it does.”

In other words, the WEF wants to be our one world government – caring for all of us around the world. And not just governance. The WEF wants to control media, entertainment and culture. It is doing a great job and you didn’t even see it coming. OK. Neither did I. It was just too preposterous.

The self-appointed Pharaoh of the WEF and its New World Order is 83 year old Klaus Schwab.  And nothing could have made him happier than the Covid 19 pandemic. He wrote a book: The Great Reset Covid 19, July 2020:

“The Great Reset is a guide for anyone who wants to understand how COVID-19 disrupted our social and economic systems, and what changes will be needed to create a more inclusive, resilient and sustainable world going forward.”

Professor Klaus Schwab was born in Ravensburg, Germany in 1938. He is Founder and Executive Chairman of the World Economic Forum, the International Organization for Public-Private Cooperation.

He founded the Forum in 1971. The annual meeting is held in Davos-Klosters, Switzerland, which attracts leading business, government, and civil society leaders from around the world. Translated – very wealthy, but not necessary bright people. Schwab grooms young leaders to take over from their elders.

And how about those WEF carbon taxes to go with their Green New Deal, chaired, of course by the Czar himself, John Kerry, that will lead most of us into poverty? Just curious, how will the WEF change the weather if they can’t stop a virus? 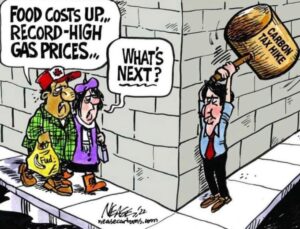 Noticing a pattern, here? Unelected people driving an agenda that goes against our well-being but not necessarily theirs?

We never voted for these people but they managed to get their tentacles into all governments during Covid. And they will not let go. Power is the most delicious aphrodisiac.  They love the Covid QR and digital ID. Just think how they can implement the “social credit score.” Not a joke.

IT IS NOT ABOUT FREEDOM OR PERSONAL CHOICE

Do not despair. We have the tools to fight back if we stand up to their edicts with our weapon: the Judeo/Christian ethic; the ethic of freedom.

I leave you to watch this video.