Time to stop fearing the Jew-Hating bullies and fight back! Pikuach Nefesh

Time to stop fearing the Jew-Hating bullies and fight back! 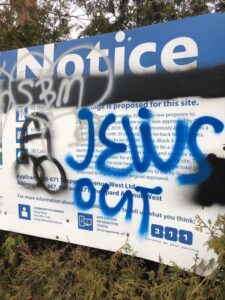 I apologize for the length of this article. It is much longer than most of my blogs. I tried to reduce the words by editing the number of Jew hating incidents reported in 2021-the most recent year of hate statistics…

Time for the Jewish people to worry less about others, Tikkun Olam, and more about Pikuach nefesh: the preservation of human life that overrides virtually any other religious rule of Judaism. We have the moral and ethical right to protect ourselves including carrying weapons to prevent attacks on our people; especially in synagogue. Protecting life is above all other religious considerations.

Rabbi Hillel asked: “If I am not for myself, who will be for me? And being for myself, what am I? And if not now, when?” The time has come, dear Jews to be for ourselves.

We are living in a time where demonizing the Jews has become culturally acceptable. Jewish students are being bullied for being Jewish and for Israel being a white colonial oppressor against the oppressed Palestinians. Critical Race Theory is targeting Jews.  The time has come for the Jews to stand up to this endless industrialized bullying, this “coercive” aggression that is purpose-driven, not fear- or anger – driven. It’s the type of bullying that demonstrates an absence of ethics and compassion. It is bullying that has a tangible goal, carried out under intellectual control and will involve sufficient violence to achieve its goal, influencing social outcomes. This is the bullying of Jews taking place taking place in the 21st century and it’s time to fight back. Literally.

Although Jewish people constitute less than one-half of one percent of the world’s population, no other people have been as harassed, attacked, impugned more than the Jews from time immemorial. When it comes to the Jews and Israel, facts don’t matter. We live in a world where facts and critical thinking have been overtaken by feelings and wishful thinking.

Jews have been the eternal punching back for those who are jealous of our way of life and our belief in God, one God: the knowledge that all life is sacred, that all people are born with equal intrinsic value that we have free-will -moral agency- we make our own decisions. We have never fallen into the trap of victim, of being the object of fate. We never blame others for our failings. We make our own circumstances. And we are hated for this. We have survived 3000 years of hate and persecution, prosecution, pogroms and incinerators. Yet we carry on. 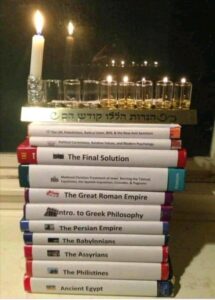 While being attacked for having the audacity to live in our own country that we have inhabited for 3000 years, we are accused of being immoral and unethical in our country when it is the only country in MENA(Middle East and North Africa) to be a democracy based on the rule of law that comes from God We continue to grow and question as God demanded of us, and create. Never forget: We are the people who gave the world the ethic that underpins freedom. The ethic that underpins freedom and Western Culture.

Yet, here we are at a time when only Jewish people are afraid to wear their symbols proudly. Families are told not to put anything on their homes that identity them as Jewish. How many families did not put their Menorah in the window during Chanukah? How many families have removed the mezuzah from their doors? Do Muslims fear wearing their culture? Do Muslim females take off their hijabs out of fear? How about Christians? Have you seen any take off their crosses? No, only the Jews. Because we have bent the knee too often from fear. We let the bullies set the agenda.

The Jews have been raised on Tikkun Olam: caring for the other. Sadly, too many so-called Jewish Groups and leaders care more for the other than the Jews: including J Street, New Israel Fund, the Religious Action Center of Reform Judaism, and Americans for Peace Now.

The time in NOW to remember pikuach nefesh. Protecting Jewish lives. Judaism’s emphasis on personal safety is threaded throughout its traditional sources, stressing the importance of protecting life, while seeking to avoid a militaristic mentality.

No other group has been attacked as often and with such hate as the Jews. The annual audit by Jewish advocacy group B’nai Brith found there were 2,799 anti-Jewish hate crimes, including beatings, vandalism of synagogues and swastikas in schools in 2021.

“If you are Jewish you are more likely to be a victim of a hate crime by far than if you are a member of another minority.”

Among other examples of antisemitic incidents in Canada in 2021:

A man was arrested outside the Shaar Hashomayim synagogue in Westmount, Que., after being allegedly caught in the act of spray-painting Nazi symbols on its doors, while also possessing incendiary devices.

Storefront windows in downtown London, Ont., were vandalized with antisemitic graffiti and swastikas and other symbols were spray-painted onto windows and doors.

The Chabad Centre for Jewish Life and Learning in Victoria, B.C., was vandalized with antisemitic graffiti.

A Jewish employee of the Liquor Control Board of Ontario was physically assaulted by a customer who noticed his Jewish name on his name tag, and told him “Saul, you’re a Jew, a dirty f—ing Jew”.

Heil Hitler 88 and swastika sticky notes were posted in a Winnipeg area school,including on lockers and in the school’s washroom.

A man allegedly performed a Nazi salute before assaulting a woman on the subway platform at a Toronto subway station.

At an anti-Israel rally in Winnipeg, a man paraded a sign showing a figure dumping a star of David in a garbage can over the slogan, “Please keep the world clean.”

In Richmond, B.C., a wooden post with the message “COVID is Jew World Order” was found on a busy street.

Imagine, if you will, if these hate messages had been made against Muslims, gays, or black people.

Parents and students at a Jewish girls’ school for parent-teacher conferences witnessed a Chicago man threaten to ‘burn a rabbi in a gas oven’ just days before the Chanukah festival.

Israel Bitton, head of Americans Against Antisemitism, observed “Of the 194 anti-Jewish assaults his group has tracked, three-quarters were in four Brooklyn neighborhoods, and 184 of the victims were Orthodox Jews, identifiable by their dress. These are the Jews who can’t hide. And won’t hide!

There are Jew-Free zones on American campuses.

And now Jews are under attack from Black Americans.

The unprecedented mainstreaming of Jew-hatred on social media, led by Kanye West (Ye), fueled anti-Semitic hate crimes, and normalized anti-Jewish hate speech. NBA player Kyrie Irving, who has 22.5 million social media followers, was also included in “The Influencers” section, because he “shared a promotion of an anti-Semitic movie.”

“It has been difficult to find any major black leader who has not trafficked in antisemitism, whether Jesse Jackson (“Hymietown”), Al Sharpton (“tell them to pin their yarmulkes back”), Louis Farrakhan (“gutter religion”), or former President Barack Obama’s former pastor, Jeremiah Wright (“Them Jews”).  Kayne West was met with pushback after warning, “I’m going death con 3 On JEWISH PEOPLE.” And then went on to praise Adolf Hitler.

Rappers from Public Enemy and Ice Cube to Jay-Z and Kanye West all spouted anti-Jewish venom. “Knock out the Jew” occasionally resurfaces as a common sport among New York city black youth.”

I find it humorous and sad that the people who attack us for being evil then stand up and say they are the real Jews!

We have fought back against Jew hatred with words. Essays. Speeches. Pleadings.

Doesn’t work. We can talk the talk all we want. We must learn to walk the walk and never bend the knee in fear. Pikuach nefesh! For God is with us!

Facts will not protect us. We must fight back – physically and let people know that we will not bend the knee. Pikuach nefesh! Maimonides, the great 12th century rabbi, philosopher and physician declared that “one is obliged to refrain from all things that impair the body and adopt those elements that strengthen it.” “The glory of young men is strength” says Proverb 20:29  If our children don’t know self defense, teach them: Krav Maga, Tae Kwon Do or JEWjItsu! Give them the tools they need to feel mentally and physically confident when faced with Jew haters, who are getting more open and physical. Provide them mace, or bear spray or sunscreen – anything to spray in the eyes of those who attack, and that includes verbal attacks. Pikuach nefesh! No more just standing there and taking it. We must show the bullies that we are resilient and, today, that means pushing back. Literally.

And that means reinstating the JDL -The Jewish Defense League which has been under attack for standing up to anti-Jewish groups, like BDS and those who call for the destruction of Israel.The JDL mission statement includes:

“The Galut image of the Jew as a weakling, as one who is easily stepped upon and who does not fight back is an image that must be changed. Not only does that image cause immediate harm to Jews but it is a self-perpetuating thing. Because a Jew runs away or because a Jew allows himself to be stepped upon, he guarantees that another Jew in the future will be attacked because of the image that he has perpetuated. JDL wants to create a physically strong, fearless and courageous Jew who fights back.”

Our Jewish students will feel safer on campus if they see their trained peers wearing a JDL sweatshirt, knowing there are people there to protect them. Pikuach nefesh!

Meanwhile, Wikipedia writes:The Jewish Defense League is a Jewish far-right religious-political organization in the United States, whose stated goal is to “protect Jews from antisemitism by whatever means necessary.” Far right? Protecting Jews? How dare they! Pikuach nefesh!

But wait! Where is the concomitant disgust over the Goyim Defense League?  (Goyim refers to non-Jews)The Goyim Defense League, also known as the GDL, is an antisemitic hate group and conspiracy theorist network of public personalities active across a number of social media websites, primarily YouTube, Facebook, Twitter and Gab, sharing Jew hatred across America with signs like “Kanye is Right About the Jews” and targeting children over Christmas with Ziploc bags featuring red, yellow and blue crayons along with antisemitic literature on doorsteps.

The police said no crime had been committed.

Remember Hillel: If I am… well time for being for my self – ourselves: the Jews: 15 million of us in a world of 8 billion. Don’t you think the time has come to fight for our right to live safely – as Jews in the diaspora and in our Jewish homeland-in peace? 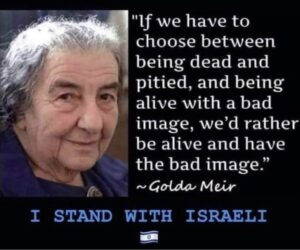