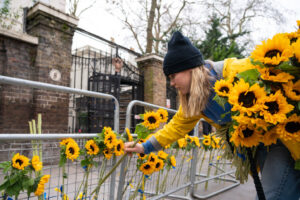 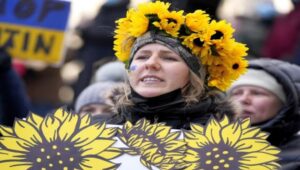 The sunflower (Helianthus), called “sunyashnikiis” in Ukrainian, is the national flower of Ukraine. The bright yellow blooms are an integral part of its culture, heritage, and even its economy. Sunflowers were first imported from North America to Ukraine in the 1800s.

Throughout Ukraine’s history, the flower has been used as a symbol of peace. In June 1996, to celebrate Ukraine giving up nuclear weapons, U.S., Russian and Ukrainian defense ministers planted sunflowers in a ceremony at southern Ukraine’s Pervomaysk missile base.

It sounds so lovely.

Sadly, the sunflower has not always been a flower of peace. It is important that we learn history. During WWII, the sunflower, along with hemp and hay, was used to facilitate the burning of Ukrainian Jewish bodies after the Jews had been shot in the back and pushed into the trenches dug for their burial.

At Babi Yar (Babyn Yar) ravine northwest of Kiev, close to 34,000 Jewish men, women, and children were gunned down in two days. As many as two million Jews were killed with bullets and at associated massacres across former Soviet territory.

I wrote about this in my book The Serpent and the Red Thread: The Definitive Biography of Evil. I learned about the horror of the slayings of Jews in Ukraine from  Father Patrick Dubois’  book, The Holocaust by Bullets.

“They shoot old people and young children with the same emotion as swatting flies. The Germans throw grenades into the pit after shooting us because not all are dead. The Einsatzgruppen are well-trained for their work. And they have a great deal of experience. They have teenagers from the towns bring hemp and sunflowers to burn the bodies.

“Sunflowers, while the ground and the rivers and springs of water turned to blood. We are drinking death as you drink water or air, mouth open, eyes closed, fingers clenched.

“The moaning and groaning, the gasps, as the wretched try to claw their way through the bodies, the sand, the blood and urine and feces, to fight for one more breath. Finger nails torn off as hands scratched the earthen walls, desperately trying to get out, to find air, to breathe.

“The pits breathed for three days. It took three days of writhing and twisting, eternal tortures moaning and movement before the pit settled into silence. That’s how long it took for all to die, suffocating under the bodies of others, covered in two to three metres of sand. Then, they would not cry out to the world again.” And today, the sunflower is the symbol of peace.