What is the state of the fake “state of Palestine”? 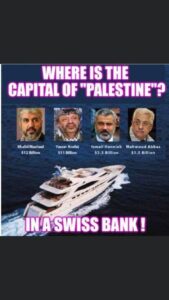 What is the state of the fake “state of Palestine”?

It is on a course to crash and burn. The idea of a Muslim state called Palestine only came into existence when the USSR, under Khrushchev, wanted a foot-hold in the Middle East in the 1960’s.

This information comes from “SOVIET  RUSSIA,  THE  CREATOR  OF  THE  PLO  AND   THE  PALESTINIAN  PEOPLE,” by  Wallace  Edward  Brand.

It was the USSR against America during the Cold War. The 1960s and 1970s were the years the Soviets were in the business of creating “liberation organizations”: for Palestine and Bolivia in 1964, Columbia 1965, in the 70s “The Secret Army for the Liberation of Armenia” that bombed US airline offices in Europe, and “The Democratic Front for the Liberation of Palestine” that bombed Israelis. But the PLO, was by far its most enduring success.

In the PLO Charter preamble they actually had to use the phrase “Palestinian Arab People” to exclude those Jews who had retained a presence in Palestine since Biblical times and had been a majority population in Jerusalem as early as 1845. Romanian Communist  dictator Ceausescu, at Soviet urging, persuaded Arafat to abandon his claim of wanting to annihilate the Jews in Israel in favor of “liberating the Palestinian People” in Israel.

Major  General  Ion  Mihai  Pacepa, highest  ranking  Soviet  bloc  defector,  spoke of the  creation  of  a  fictitious  “Palestinian   People”  who  allegedly  demand  political  self -determination. The account is also corroborated by Zahir Muhsein, a member of the PLO executive board. In an interview by the Dutch newspaper Trouw in 1977, he stated that there is no such thing as the “Palestinian People”, that the term’s use is a political ploy, and there is no quest for political self-­‐determination — that as soon as the Jews have been wiped out, sovereignty would be turned over to Jordan. Hafez Assad also has stated there was no “Palestinian People”; that prior to 1964 the Arabs in Palestine called themselves “citizens of Greater Syria”. During WWI the British offered the local Arabs self-determination if they helped in the war against the Ottoman Empire but the local Arabs fought on the side of the Ottomans to the eternal gratitude of the Turks.

This is from Pacepa’s article “Russian Footprints” in National Review Online.

Now that we have established the “creation” of a fake people in a fake state, let’s move on to today.

Today, the Muslim Arab countries have no need for a Muslim “Palestine.” They are no longer in league with the Russia against the West. In fact it appears that the Muslim world is more at odds with each other: Sunni Saudi Arabia and Shia Iran. The Saudis do not want Iran to have a nuclear bomb which seems to be the desire of the Democrat Party in America along with Russia and China. When Donald Trump came along and began the miraculous Abraham Accords between Israel and the Arab world, the fate of the Muslims in their fake state no longer concerned them. With the Abraham Accords, September 15, 2020, the United Arab Emirates and Bahrain charted a new course in the history of Arab-Israeli relations by recognizing the State of Israel and normalizing diplomatic relations. Later that year, two other Arab nations, Sudan and Morocco joined. The Accords establish a foundation for peace and collaboration that can be tapped into by any country interested in cooperation. Many in the Arab world realize that Israel is needed to protect them from Iran. And they see the greatness of the accomplishments of the Jewish people in the Jewish state of Israel, a state, a people, a religion, a culture for more than 3000 years:a state, a people that survived 3000 years of intense Jew hatred.

The Jew haters warn that “normalizing relations between Israel and Saudi Arabia without addressing the ongoing occupation of the Palestinian territories will worsen regional tensions.”   They say “establishment of diplomatic ties between Israel and the UAE” is a betrayal. How dare the Gulf neighbors choose economic benefits and shared security concerns about Iran over their moral responsibility to the Palestinian people?

Arab Muslim countries have given billions to the Palestinians and the money has gone to their corrupt leadership, instead.  The money has been used to promote the one thing in which they have excelled: terrorism;  pay for slay, and  teaching hate in their schools instead of, I don’t know, math, economics, co-existence.

A typical lesson in the PA schools.

“What should be done with the Jews who will survive after the liberation of Palestine?”
The answer: Extermination!

“We will sing and learn by heart:   The Land of the Noble Ones
I swear! I shall sacrifice my blood in order to water the land of the noble ones
And remove the usurper [Israel] from my country and exterminate the defeated remnants of the foreigners [in Arabic: ubid fulul al-ghuraba’]
O, land of Al-Aqsa and the holy site [haram], O, cradle of pride and nobility
Patience, patience, for victory is ours and dawn is peeping out of  darkness”

While the UN, the EU and America continue to support the PA, Arab financial aid to the United Nations Relief and Work Agency for Palestine Refugees (UNRWA) has dropped by 90% in the past few years, according to the agency’s spokesperson Adnan Abu Hasna.

The awakened MENA, Middle East and North Africa, is busy working with Israel. Their gains by seeking peace with Israel will far outweigh anything they may gain by supporting what they all know is a fake people living on Jewish land as stated clearly in the Bible that Islam accepts.

What better proof of the détente between Israel and Saudi Arabia than the fact that President Biden took a direct flight from Israel to Saudi Arabia.  This despite the fact that he and his Democrat cronies want nothing more than to disrupt the Accords by constantly referring to the needs of the made-up Palestinian people

And Saudis will also give permission for Israeli Muslims to take direct charter flights so they can participate in annual pilgrimages to Mecca.

Normalization between Israel and Saudi Arabia, the custodian to the Two Holy Mosques and protector of the Two Holy Cities is earth shattering in the Middle East. “It is an open secret that the Saudis have many quiet contacts with Israel and extensive cooperation in many important areas. These contacts take place both behind the scenes and increasingly out in the open, with many Israeli businessmen reportedly traveling to Saudi Arabia on Israeli passports in recent months. There will be broad support for a deal with the Saudis, particularly given that the deals with the UAE, Bahrain and Morocco have proven so successful.”

Not reported in MSM (I didn’t hear it – did you?) the Saudi foreign minister announced this year at Davos, “We always envisioned that there will be full normalization with Israel.

The Saudis know they cannot trust America to stop Iran’s development of a nuclear bomb, but they can thrust Israel!

Another nail, a big one, in the coffin of “Palestine.”

Whoever thought that the cozying up to Iran by Obama and now Biden – his lackey, would lead to the fall of “Palestine”? America, along with China and Russia are supporting Iran. And that pushes the Sunnis into the arms of Israel. Arms that hold out the promise of peace and all the profits that come with peace.

Calling Israel an apartheid state, cries of BDS are just noise. The leaders of the Muslim countries in MENA will lead the way to the end of the fake state of Palestine. They know full well that the made up country of Palestine is really part of the state of Israel; since time immemorial.

There is one more benefit of the Abraham Accords: it has significantly reduced the amount of antisemitism in the media of Gulf countries and Morocco. And if this continues it will positively affect the world response to Israel.

Peace and prosperity will win out. Too many Muslim leaders know that their very existence in a world where three leading world powers, America, Russia and China stand with Iran; the country that calls for the death of Israel, Jews and America: that Israel is their protector. And that knowledge will drown out the noise of hate from “Palestinians” and their allies on the left, and calls for a two state solution.

Only one state will lead to peace and prosperity for the Muslim countries: ISRAEL.

The state of the fake “state of Palestine”?

With the continued support and promotion of the Abraham Accords, the  normalization between Israel and the Arab world, the flight path for “Palestine” is Crash and Burn. 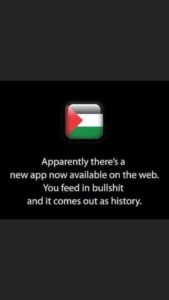