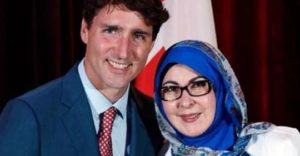 Let me introduce you to Canada’s Ilhan Omar: Fatima Benhatta.

Canada has a Prime Minister who stands up for those who face racism, xenophobia and Islamophobia. He stood proudly beside Iqra Khalid, an MP and member of the Liberal Party when she brought forward Motion 103 that called for the end of Islamophobia. Granted, the Parliament was unable to come up with a definition of Islamophobia, other than the irrational fear of Islam, but that did not stop our PM from reminding Canadians that we must not be Islamophobic.

PM Trudeau has made a point of thanking esteemed members of the Muslim community, including Fatima Benhatta, the British Columbia representative of Islamic Relief Canada (IRC).

“Islamic Relief Canada is one of the world’s leading development charities working to end poverty and suffering in over thirty countries around the world. We abhor terrorism in all its forms, and we categorically reject any allegation of links to terrorism and any such accusations that have been made. We are a registered charity in Canada and are governed by all rules and regulations under the Canada Revenue Agency.”

Islamic Relief Canada received $6,836 through the Canada Summer Jobs 2017 of Ontario. It had to sign an attestation that they agreed with Canada’s core values of respect for individual human rights including the values underlying the Canadian Charter of Rights and Freedoms as well reproductive rights and the right to be free from discrimination on the basis of sex, religion, race, national or ethnic origin, colour, mental or physical disability or sexual orientation, or gender identity or expression

IRC is a fan of Justin Trudeau.

“Yesterday, the Prime Minister of Canada, Justin Trudeau joined our team at Islamic Relief Canada in packing boxes to give to a food bank in Montreal. We thank you for your support and helping to commemorate the spirit of Ramadan together!”

Now back to Fatima Benhatta.

December 31, 2015  Ms Benhatta congratulated Justin Trudeau– (originally in Arabic): “…May Allah bless our new prime minster [Justin] Trudeau, who renewed the love of people to each other, unlike the Jew [Stephen] Harper, [I wish] Allah makes the earth cover him, because of what he did to the Muslims and the division he caused between Canadians.” (archive)

On behalf of the Government I would like to thank you for your hard work and contribution to Islamic Relief Canada… Thank you once again for your service. I wish you all the best. Please accept my warmest regards,

The feeling is mutual.

Assalam aleikum [peace be upon you]. July -31-2017 was a historic memorable day for me,truly it was a dream come true. To meet our honorable Prime Ministre justin Trudeau,take pictures with him and talk to him in person ,thank him for Uniting Canadians and bringing them back under the umbrella of peace,love and harmony. It’s an Honor. He is such great humble adorable personality …full of love and Humanity just like his Dad ..I spoke to him in french ,I told him that I have met his Dad and chatted with him …and how much I love Trudeau family… He smiled a big smile and his eyes got watery and he bent his head down, put his hand on his chest,saying you brought me tears and i am touched deeply,when you said you have met my Dead [sic] and chatted with him. It was pleasant evening really … Thank you to Brother Bilal cheema and his Liberal office and team for gathering us and for their great efforts ..it was well organized mashallah [Allah has willed it]..

Here are some of the views of Fatima Benhatta, the woman admired by Trudeau. Keep in mind that Canada is a supporter of the State of Israel.

December 31, 2015 – (originally in Arabic): “…May Allah bless our new prime minster [Justin] Trudeau, who renewed the love of people to each other, unlike the Jew [Stephen] Harper, [I wish] Allah makes the earth cover him, because of what he did to the Muslims and the division he caused between Canadians.” (archive)

January 1, 2013 – (originally in Arabic) “…Everyone knows that celebrating Christmas is prohibited and innovation [that has no roots in the traditional practice], and it is imitation of the Christians and this is indisputable… We can not celebrate this day because it is a festival and the history of the Christians… Omar Bin Al-Khattab said: Avoid the Jews and the Christians during the days of their festivals, because the wrath will descends on them. Allah may be angry with us during the celebrations of these festivals, because the hadiths say that Allah will disfigure people at the end of time…” (archive)

“…Massacres committed by the Zionist tyrant people are not less [in their scope] than what they call the Holocaust. We thought then that it was a disgrace on the forehead of the sons of Zion [Jews]… The history repeats itself… and it came back, the suffering, family rupture, homelessness and killing by a people who have no mercy not humanity, the people of the sons of Zion [Jews]. Allah, Exalted be He, said on them: ‘afflicted you with the worst torment, slaughtering your newborn sons and keeping your females alive.’… My brothers and sisters [who believe] in Allah, we ask you to support us and to stand by our oppressed people in the Gaza Strip. We urge those who have living hearts because the Palestinian people who struggle and engage in jihad is in an urgent need for standing by them, and supporting them materially and morally…” (archive)

August 21, 2018 – (originally in Arabic): “…It is impermissible to build a mosque over a cemetery because the messenger [Mohammad], peace and prayer be upon him, said: Allah cursed the Jews and the Christians because they turned the graves of the prophets into places of worship…” (archive)

December 7, 2012 – “Gaza emergency call… Salam Aleikum [peace be upon you]. Kindly purchase your Tickets on line in early time , We look forward to see you next Friday,,,your presence means a lots to us and to the Forgotten Brothers and Sisters in Gaza. Your Donation Can make a difference. As we all know, not long ago Gaza went through a hard tough unforgettable times, Israeli commited [sic] a MASS MUDER that made no difference then the jewish holocaust with no mercy, thousands of Children and Women have been massacred deliberately

Here are Fatima Benhatta’s statements on Shia and Shiite Muslims

October 26, 2015 – (originally in Arabic) “…I swear by Allah that if our master (sayyidina) Ali were alive, may Allah be please with him, he would have burn them [the Shia Muslims] in their dwellings and would have not left any of them [alive]… [by killing a young boy] you [Shia Muslims] destroyed the [Islamic] faith, stained the image of Islam and you made the world perceive us as bloodthirsty and religion of blood and killing, and as people who teach their children from early age terrorism and [spilling] blood and instill in them extremism and hatred…” (archive)

January 13, 2016 – (originally in Arabic) “…In fact, the fate of all those of Shiite Hezbollah who are killed in Syria is the hellfire.” (archive)

January 13, 2016 – (originally in Arabic) – “How can we say that these ignorant people [Shia Muslims] don’t disbelieve? How can we lie to ourselves and say that they [Shia Muslims] are our brothers in religion [Islam]… O Allah, send to them smoke [fire] from the sky to purify the earth from them…” (archive)

March 19, 2017 – (originally in Arabic) “…On the other hand, Iran, like the devil, hunts in the turbid water [in Nigeria] by inviting people to accept Shia Islam [proselytizing]…” (archive)

Are these comments not Islamophobic? Where is our Prime Minister?

September 5, 2017 – (originally in Arabic) “The Buddhists [in Myanmar] do not want Islamic roots and they are conducting ethnic cleansing of their land… They are worshippers of the cattle, the sun, the idols and the fire. May Allah take revenge against  them, make the earth cover them and shake the land under their feet… the Buddhists commit moral cleansing and erase your roots, you can not let them stay alive…” (archive)

This is the woman PM Trudeau admires.

Why does the Prime Minister want to be associated with Fatima Benhatta and Islamic Relief Canada?

Fear not my American Friends. IR is in your government, too

Congresswoman Ilhan Omar will speak at an Islamic Relief USA emergency fundraising dinner for Yemen in Tampa, Florida, on February 23, alongside a well-known Islamic Relief USA official, Yousef Abdallah, who has openly advocated for violence against Jews and has shared antisemitic sentiments on social media.

Islamic Relief has been found to have connections to funding terrorism and Islamic extremism. A Swedish government report named it as a front for the Muslim Brotherhood; the Tunisian government is reported to have investigated allegations that Islamic Relief was funding jihadists on the Libyan border; and members of the US Congress have launched an inquiry into a reported FBI and IRS investigation of Islamic Relief’s activities.