Dear Jews, when it comes to Muslims, let us learn from the Sikhs.

Dear Jews, when it comes to Islam and the Jews, nothing ever changes.

Remember the song:  How sweet it is to be loved by you?

Muslim version: How sweet it is to kill Jews:

It is time for Israel to learn from our friends, the Sikhs, that being kind and nice, and “fair” and bending over backward to accommodate, include and tolerate those who hate us, will never work in our favour.

Let us learn how the Sikhs dealt with the Muslims who called for their extermination.

Let us learn from a response by the first Raj of the Sikhs, Banda Singh Bahadur, who left his most profound mark between 1710 and 1716, to the call for restraint against the Muslims recommended by Bulleh Shah, the mystic poet.

As written by Harish Dhillon in his book: The First Raj of the Sikhs: The Life and Times of Banda Singh Bahadur Banda.

“You (Bulleh Shah) teach the path of patience and love. You preach that if someone strikes us we must turn the other cheek and so win him to the path of goodness and compassion. But the people we are dealing with do not understand such patience and forbearance. They look upon it as yet another sign of weakness, as subjugation to their power. The only language they understand is the language of force, an eye for an eye and a tooth for a tooth.”

“Tolerance and forgiveness are indeed keystones of any faith that is noble and good. But tolerance is an acceptance of mistakes made by others, tolerance is the understanding that others have a right to their beliefs and practices. While we wait  for this to happen (to reach the minds of  them who practice these acts of  tyrannical barbarity and influence to the path of righteousness) countless innocent men and women will continue to pay with their lives. I cannot let this happen…So I must go forth with my unsheathed sword.”

The Sikhs had to once again fight back against the customary call of Jihad by the Muslims. They had to deal with tunnels the Muslims dug into their forts(Sound familiar, dear Israel?)

In the end, Banda Singh Bahadur met his fate at the hands of the Muslims. First his young son Ajay Singh was hacked to pieces in front of him. The boy’s heart was thrust into his father’s mouth.  Then Banda was attacked, his limbs hacked off piece by piece and then his head was cut from his body.

Are we fated to never learn from the past despite our admonition: NEVER FORGET?

What in God’s name is going on in Israel?

No Jew should ever be in fear for his life living in Israel, yet, we are living through a monumental failure of the Israeli government to protect Jews.  How is it possible that the only Jewish state is unsafe for Jews? How did this happen? Who is responsible?

I believe this happens because Jews in power in Israel fear the media, fear offending the EU, NATO the Biden USA, more than they fear failing the Jews. Too many Jews in Israel have been taken in by Progressive ideologies. Tolerance, inclusion and accommodation aren’t working in Israel. Appeasement is a monumental failure. Think Gaza.

Israel not only deals with the sanctimonious West, the Diversity, Inclusion, Equity (DIE) people who know Israel is an evil oppressor; she is under constant attack from the Muslims. It is never ending. It will never end if Israel does not choose to protect the lives of Jews above all else.

While we Choose Life:

For I give you this day the blessing and the curse, life and death

The Muslims choose death: jihad, murder and mayhem. Taking the lives of non-Muslims is in their prayers, their Hadith and the teachings of Mohammed. Death, not life. While others preach tolerance, Islam teaches intolerance of the other: from the moment Mohammed went to Medina and ethnically cleansed two tribes and murdered the third. Decapitation of the men, and enslavement of the women.

Have we already forgotten Daniel Pearl? On February 1, 2002, 38-year-old American journalist Daniel Pearl, the Southeast Asia bureau chief of the Wall Street Journal, was beheaded by a Muslim terror group in Pakistan; on video.

Then came Khaybar.  The Prophet (S.A.W.) said, “Allahu-Akbar! Khaibar is destroyed, for whenever we approach a (hostile) nation (to fight) then evil will be the morning for those who have been warned.”

And today, Muslims scream “Jews, remember Khaybar, the army of Muhammad is returning.”

Why do they scream about Kahybar? Because they always choose death!

How reassuring for the Jews in Israel, let alone the diaspora where mass protests against Israel are all the fashion.

Israel tolerates Muslim children being raised bathed and swaddled in Jew hatred; taught how to kill in kindergarten.

And Israel accommodates and placates the hateful Muslims living in Israel, at the expense of the Jews!

And Dear God, the Jews must not be allowed to pray on the Temple Mount. It might upset the Muslims!

Is it about power? Political leaders afraid to lose power and so choose to work with the enemy within?

The only Jewish country in the world is surrounded by 20 countries and territories, home to an estimated 341 million Muslims. To put this in perspective; there are 2 billion Muslims and approximately 15 million Jews in the world; 7 million of whom live in THE JEWISH State and 8 million others throughout the world.

Can we not agree that if someone says they are going to kill us that we should believe them?

Bill Warner has written a series of books about Islam.

The Muslim call from time immemorial has been to kill the non-Muslim and especially the Jew. It is the call to Jihad.

Bukhari 4,53,386 …Our Prophet, the Messenger of our Lord , has ordered us to fight until you worship Allah alone or give us jizya(Tribute)

Ishaq425…Those who argue against Islam and resist Islam can be killed as a sacred act.

Ishaq791-3 “Victory or martyrdom.”  According to Mohammed the Prophet “Jihad is deceit.”

For it is written

Bukhari 4,53,386 “Whoever amongst us is killed (martyred) shall go to Paradise to lead such a luxurious life  as he has never seen, and whoever amongst us remain alive, shall become your master.”

The Koran teaches3:117 Believers! Do not become friends with anyone except your own people. Bukhari 4,52,288 Mohammed said, “There should be not any other religions than Islam in Arabia.” And that money should continue to be paid to influence the foreign Kafir(Non-believer) ambassadors.

Yet, Israel acts as if this will all go away if we just talk, persuade, or let’s call it what it is: appease. One can never appease those who call for your death. Appeasement breeds contempt.

Have we Jews forgotten Germany? Have we forgotten the assimilated, acculturated Jews who KNEW they were not the “Jews” about whom hitler was speaking? Of course not. They were tolerated, included  and accommodated. NOT.

Latest polling shows 70% of the Palestinians are opposed to an unconditional return to peace negotiations with Israel. Another 58% expressed opposition to the two-state solution. So what does that leave? Right – Muslim extermination of Israel.

It was Machiavelli who taught us:

“It is better to be feared than loved, if you cannot have both.”

The time has come, dear Israel to move away from our tolerance, inclusion and accommodation of those who call for our death since time immemorial. Enough. It is time to be feared. Of all the countries in the world, the Jews must be safe in the Jewish state of Israel, for we have but ONE state. And it must be a safe haven for we will be hated and scapegoated as individuals and a state until the end of time.Three thousand years of Jew killing should have taught that to us, by now.

Remember, after the most recent murderous attacks against the Jews in Israel PM Bennett said.

“We’ll put our hands on the terrorists and their collaborators, and they will pay the price.”

Like this; prevent the enemy flag from flying – how about all over Israel! Seems the Muslims lament Israel’s existence by marking the Nakba and include marches with PLO flags, calls for terrorism during student protests, calls for revenge, and calls for another Intifada.

What a sight to see…in Israel. 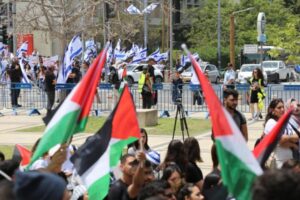 Time, dear Israel, to tell anyone who harms or murders a Jew that they will be in jail, forever. 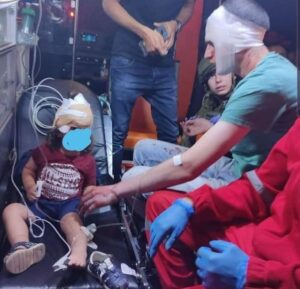 Their family, and by family I mean extended, will be removed from the country and be sent to Gaza or Jordan. Their homes will be sold only to Jews. As far as the response by the EU, the UN the NGO’s and of course America – they won’t like it. Tough! They stand with the Muslims. It’s a numbers game, you see. Two billion Muslims and 15 million Jews.

Stop pandering to the “Palestinians,” and the EU and the UN and the USA. The state’s most important job is to protect her citizens. Protect the Jews in Israel.

The Lubavitche Rebbe once commented that concessions to the Palestinian Authority, which works under the aegis of the Palestine Liberation Organization, represent a matter of Pikuach Nefesh- a threat to human life.

If Israel will not protect the Jews who will?
If not now, dear Israel: When?