Have Women Lost the Upper Hand in Mating?

I just read Margaret Wente’s article on women in the Globe and Mail.Why are good men so hard to find?  Seems men no longer have an incentive to settle down. Shocked I tell you, shocked.

I wrote this four years ago. Nothing has really changed. Because men are male and women are female and we really do have innate differences and needs.

Have Women Lost the Upper Hand in Mating?

The temperature is warming. There is a freshness in the air. New beginnings and thoughts turn to flights of fancy. It’s springtime. Mating season. The call of the wild. Blogs and magazines and television and radio are filled with suggestions for women to spruce themselves up, “youngify” themselves. Get ready for the chase by getting a jump on the competition.

There are ads for face and butt lifts; breast and lip augmentations; hair and eyelash extensions; 57 varieties of diets and the best in body sculpting. You can take body fat from your posterior cheeks and plump up your facial cheeks. There’s the laser to remove skin blemishes and hair and even belly fat. And of course, a little Botox, here; some Restylane there; derma fillers for those pesky wrinkles that come with age, and perhaps laughter.

Don’t stop there; put the gild on the lily. Buy the latest in face and body creams, makeup that hides any flaws, while giving you that youthful glow. Now you can even get hair treatments that make your hair look younger, too. After that don’t be shy; shop for the latest in clothing that will give you the aura of youth.

Sisters! Stop! I beg you; take a page from our animal friends.

In nature, the females are the gate-keepers of the gene pool. And they know it. They instinctively know that he needs her in order to continue his genetic line. The males do everything they can to attract the attention of the females. They have an instinctual drive to spread their sperm everywhere in hope of passing down their genes. Be a bird watcher. Watch the male spread his plumage, listen as he warbles in an exquisite voice, and look at his vibrant colours, like the bright red male cardinals who “woo” the females-who tend to be blah brown. Females in the animal kingdom don’t worry about their looks. They ALL know, instinctively, that they are special and desired.

Just take a look at male peacocks plumping themselves up as they spread their magnificent tails. 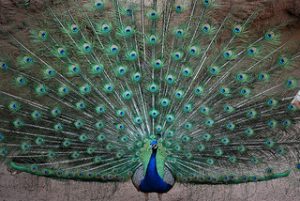 “The large train is used in mating rituals and courtship displays. It can be arched into a magnificent fan that reaches across the bird’s back and touches the ground on either side. Females are believed to choose their mates according to the size, color, and quality of these outrageous feather trains.” The peahens are not fools. They are looking for the best genetic material to pass down along with theirs. And the males know they have to work hard to get the female’s attention.

The males in the animal kingdom primp, plump up, sing, twirl, dance, chase and almost beg the females to look at them and choose them as their mates. They fight other males to show her his strength. All are saying, “Look at me, take me, I am the best!”

You know, there was a time, not that long ago when men dressed to kill. Ahh, Versailles. Circa 18th century.They adorned themselves in big, bouffant wigs, wore beautiful, brilliantly coloured brocade coats, large hats with plumes-like a peacock, fancy shoes and hose. They strutted their wares.

Then along came Freud. He wrote extensively about “penis envy.” I personally believe that he did that to counter “vagina envy;” the male’s deep-seated fear of women that goes back to the beginning of time.

I think that deep in the psyche of all men there is a fear of us; our power. There is a long repressed memory back to the time when humans left the cave and began to speak, and think in abstract terms. And they talked amongst themselves. Can you just imagine the conversation? A woman bleeds each month and does not die. A woman gives birth, bleeds profusely, but does not die. How can that be? Is it magic? Is it witchcraft? When men bleed they die if it isn’t stopped in time. Quite a conundrum. This is scary!

Have to find a way to deal with this. So Freud solved the problem of male fear and came up with “penis envy.” To make us feel incomplete and “less than.” And because we are incomplete and less than, we spend our days, and our money completing ourselves. And fighting over men.

Unfortunately, human females have lost this most important connection to nature: Their position of power. Our young women call out to the males with siren songs, paint their faces like a peacock’s tail, and fight for the right to date a male of the species.

Our young women have lost sight of the fact that they are the gate-keepers of the gene pool. They are the ones who decide whose genes will live and whose will not.

It’s time for our women to behave like animals! Don’t spend so much time primping, fussing adorning and preening. Give it a rest. Let the men do it. That’s their job. Let them behave like animals! Let them dance and prance around you. Let them show you why they are worthy of your genetic material; why you should choose them and thereby let their genetic material live on. That is one of the basic drives for men. They might not think about it, but they are genetically primed to pass their genes down through the generations.

We women have made it too easy for them. They not only want us, they need us. We have forgotten that they need us more than we need them. Especially today. We can get genetic material from the sperm bank. So real men have to work harder. Let them!

Time to teach our daughters that the word “no” is a good word. They are not at the beck and call of the boys. Time to behave like the females in the animal kingdom; sit back, let the men work. Let them know in no uncertain terms that you are particular about the genes you will allow to pass down.

The next time a young man or an older one says to you, “If you REALLY loved me…” Tell him, “Zip up your genes, they’re not my style!”