If you didn’t like the nice Jew, you’re gonna hate the nasty Jew! 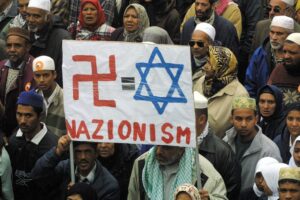 Jews have been under attack since Abraham and Sarah married. We became a nation in the desert, brought the world the only ethic that makes freedom possible and survived 2000 years of Jew hatred – coming from Christianity and Islam. Persecutions, prosecutions, pogroms, expulsions, forced conversions, auto-da-fé.  And then came the Shoah and the world repented. Never again! they said.

Right. The world sort of moved from hating individual Jews, antisemitism, to attacking Israel, the legal and historical home of the Jews. Anti-Zionism! Because according to the Durban Conference, Zionism IS racism! And just like Nazism.

So we respond with letters. Because we are nice.

Heaven forbid that Jews have a state on their own land. Well, let’s face it, Israel is smack in the middle of the oh-so wanted Muslim Caliphate. Attacking Israel is OK. Especially, today, as Jews are now accused of being colonizers on their own land. So we explain, over and over that we are not colonizers. Because we are nice.

While Jews over the millennia made great contributions to society, including Nobel Prizes, that hate never abated. Between 1901 and 2020, the Nobel Prize has been awarded to more than 900 individuals and organizations. At least 208 of them have been Jewish.

Oh those nice Jews. Look what they contributed.

Israel has also produced a disproportionate number of Nobel Prize winners. In August 2015, six years ago, Times Higher Education ranked Israel the fifth best performer this century based on the number of Nobel Prizes won as well as the significance and prestige of each one. The publication also ranked global universities based on Nobel Prize winners and the Technion-Israel Institute of Technology placed eighth, higher on the list than Harvard and every British University.

And yet, the State of Israel, despite  contributing to the greater good, is just not nice enough. The world still does not like us. In 1957, Israel developed a government arm to assist other nations in need. 1957! This organization shares Israeli experience in education, agriculture, medicine, food security. Israel has shared her expertise in Ghana, India, Guatemala, Haiti, Kenya. Sadly, accustomed to tragedy at home from constant Muslim terror attacks, Israel is ready to help others facing disasters, including Haiti in 2010 (earthquake) and more recently, at the collapse of a condo in Surfside Florida.

Then there is IsraAID , an organization that provides physical and psychological aid to people around the world including the Yazidi women who were enslaved by  ISIS and the Japanese people after the Fukushima nuclear disaster. And, of course, Israeli technology: Israel Start-Up Nation produces more start up companies than countries far bigger. Take a look at these inventions that have made life better from medical care to agriculture for all.

During the civil war in Syria, 2011, Jewish doctors and nurses were on the border caring for SYRIANS, civilians, including children, and soldiers sending them back home. And you can read more about how nice we are in Noa Tishby’s book Israel.  Always so nice and kind and caring. Hating war, trying to avoid it while under constant threat from Hezbollah and Hamas and Muslims who teach their children to kill Jews for money – pay for slay. Yet, no matter how nice we are, we are hated. Just take a look at the Democrat Hit Squad in America.

Look at the Democrat Party in America, period.

Really, what did all that niceness do for Israel on the world stage?

And then there is Pope Francis. In case you are unaware, Pope Pius XII watched as Jews were  taken by the Nazis to Auschwitz.  Now, Pope Francis  recently declared that the Torah “does not give life, it does not offer the fulfillment of the promise.” What a ringing endorsement. Can you imagine if he said similar things about Islam and the Koran! No. Because he wouldn’t. Because Islam is not so nice.

Remember when we stood with Martin Luther King Jr. for Civil Rights and two of our boys  Andrew Goodman and Michael Schwerner from New York City  were murdered, but today,  BLM promotes BDS – whose purpose is the eradication, elimination extermination of Israel. Making alliances with other people has worked for them, but not us. And so many nice Jews still support BLM. Of course! They want to be liked because they are nice.

Here, in Canada, we just had an election that included the NDP, the New Democrat Party, whose leader Jagmeet Singh has endorsed BDS for his party; BDS – Boycott, Divestment and Sanctions against Israel; in other words, the elimination of the state. Where were the Jews? Not one went up to him in front of the media and asked about his Jew hatred. Oh, right, we’re nice. We don’t do those things.

A new survey (which you can read more about here) reflects the recently released FBI’s Hate Crimes Statistics for 2020. The bureau says that 57.5 percent of religious-based hate crimes last year had Jews as their targets, even though Jews represent 2 percent of the population.  Jewish students “find themselves the target of derision, bigotry, and condemnation simply because they are Jewish.” Keep in mind that in a world of 8 billion people, there are only 15 million Jews. A relatively small target, yet rarely missed.

So, now we have university students so afraid to be Jewish that they hide their Jewishness. Kenneth L. Marcus, Chairman of the Brandeis Center and a former Assistant U.S. Secretary of Education for Civil Rights noted:

“At precisely the same time when universities were becoming more sensitive to issues facing racial and ethnic minorities, Jewish students were so embattled that they had to hide their identities.”  He added “I was especially alarmed that the longer they’re on campus, the more pessimistic they seem to become about the situation and the more they feel a need a need to hide who they are.”

No, we are too nice.  We doth protest too little. We seem to prefer appeasement; sadly it brings contempt. A vicious cycle.

And then let’s not forget the UN; all those reports on the terrible Zionists, while the human rights violations in China, Venezuela, Saudi Arabia, Belarus, Cuba, Turkey, Pakistan, Vietnam, Algeria, or on 175 other countries are missing in action. While Israel and the Jews speak and act for others, because we are so nice, others do not speak up for us. Hmmm. Over the years, the European Union has been the largest single donor to the PA, the people who call for the extermination of Israel, providing 150 million euros (about 175 million US$) for social allowances, including salaries for employees such as teachers and health care workers.  Aiding and abetting a wee bit more, the EU plans to fund another Palestinian state that will lead to Israel’s destruction. So what if there is a Palestinian state already – Jordan.

We have some very special nice Jews in organizations like Independent Jewish Voice  and Jewish Voice for Peace  and B’Tselem. They are so nice they stand with those who condemn Israel. It’s all about inclusion.

Well, I don’t know about the rest of you, but I am tired of being a nice Jew because being nice has not made the world like me.

Then again, so what? You don’t have to like us, but you bloody well better learn to respect us.