NEW BOOK:The #IslamophobiaIndustry: the insidious infiltration of Islam into the West 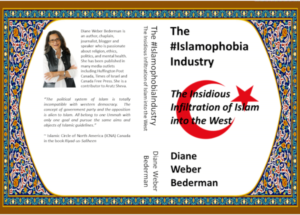 I am pleased to announce the publication of my latest book:

The #IslamophobiaIndustry:the insidious infiltration of Islam into the West

Abdur-Rahman Muhammad, a former member of the International Institute of Islamic Thought (IIIT) said, “Islamophobia is nothing more than a thought terminating cliché conceived in the bowels of Muslim think tanks for the purpose of beating down critics”.[1] He also went on to say, “They (Muslim think tanks) study such movements as the gay movement and modeled islamophobia after homophobia and they use it like a bat to beat down the critics and to stifle any kind of debate and to stymie their critics.”

The motto of the Muslim Brotherhood:

At the same time, Islam has been quietly promoting itself in every aspect of our lives, from government to media to education while silencing any criticism about its diametrically opposing value system.

And we, the people of the West, because of our love of tolerance, inclusion and accommodation, allow this to happen.

This book reveals the value system of Islam. The #IslamophobiaIndustry wants one thing, and one thing only – our silence so that Islam can spread. It is an attack on our freedom of speech. We must not let ourselves be silenced by any ideology.

We are committing suicide by democracy. Will the West bend the knee, or will we protect and defend our freedom–loving way of life?

“Author Diane Weber Bederman serves up an essential reality check about the ‘Islamophobia’ industry’s aim to shut down all criticism of Islam, while propagating the farcical view of Islam as a “race”.   This engaging exposé captures the urgency in understanding the threat to all freedoms by a doctrine that has insidiously infiltrated every layer of Western society.

“As the memory of the 9/11 attacks twenty years ago recedes, Diane Weber Bederman’s important book The Islamophobia Industry serves as a crucial wakeup call to a Western world that, in the name of tolerance and inclusion, is succumbing to an even more insidious, internal threat – the erosion of our rights and freedoms as the value system of Islam grows in influence and power.”

Tom Quiggin, MA, CD  Mr Quiggin is a court expert on jihadist terrorism in the Federal Court of Canada and the Ontario Superior Court. He has testified both for and against followers of the Islamic faith in terrorism cases.

In this book, the author points out that moral and cultural relativism are our enemies, especially when it is insisted that all cultures are somehow equal and that all values are the same. Taking advantage of this, the author argues that an industry, called Islamophobia, is an attack on our liberty while it infiltrates and influences Western values and democracy.

Freedom of speech remains our single most important right. Without freedom of speech, all other rights and freedoms will erode to the point of irrelevance. As such, the Islamophobia industry must be stopped now.

I hope you will buy this, book, share your opinions and learn the facts so that you can stand up for freedom and democracy without fear.