Screw Big Pharma Before They Screw You! 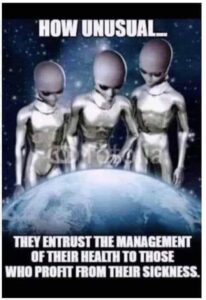 Screw Big Pharma before they screw you!

I don’t think this comes as any surprise: Big Pharma and Fauci are the yin and yang of evil

I suggest we are raising generations of submissive citizens, hooked on drugs,  who can no longer think for themselves. We can either thank Big Pharma or screw them.

It’s no secret that Big Pharma is making it big. Pfizer and Moderna are expecting $32 billion and $19 billion, respectively, just in COVID-19 vaccine sales this year.

In 2020, the pharmaceutical industry spent 4.58 billion U.S. dollars on advertising on national TV in the United States, unsurprisingly representing a big shift in spending compared to the 2019 pre-covid market. In 2020 TV ad spending of the pharma industry accounted for 75 percent of the total ad spend.

Good Μorning America is brought to you by Pfizer.

Anderson Cooper 360°, brought to you by Pfizer.

ABC News Nightline, brought to you by Pfizer.

CNN Tonight, brought to you by Pfizer. 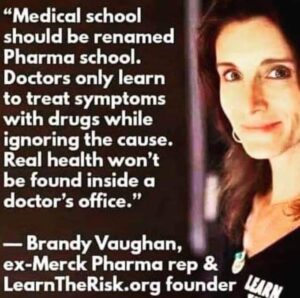 These ads tell you all about the next great pill or shot that will fix your latest problem; from ingrown toenails to cancer. Listen to the commercials. After they tell you about the miracle fix they give you the side effects – like TB or liver disease, blood clots, a heart attack or depression.

Have you ever looked at the number of drugs taken by your parents and grandparents? Has anyone ever done a check on which drugs are really necessary and which drugs have been prescribed for the side effects?  But, hey, short term gain for long term pain.

From the old to the young. Now we have Elmo from Sesame Street schilling for the drug companies – telling children who rarely get Covid or die from it to get that injection!

What will Elmo sell next?

I used to think that medical journals shared facts – all the facts – good and bad.That we could trust their reports. Think again. Medical journals are incentivized to publish studies that show the positive impact of drugs and vaccines! Because they are funded by…you guessed it…Big Pharma!

Remember oxycodone-the miracle pain killer. It killed alright-but not just pain. Did and does a great job of killing people.

But forget about finding a cure for cancer or diabetes because it is not in their best financial interest.

What should scare all of us is the potential damage being done to our children’s developing brains from all the drugs we give them. There are 34 vaccines given to American children from birth to 18. Not 34 different ones because some require many doses. Then we are giving our pre-pubescent children a vaccine to prevent sexually transmitted HPV when they probably have little knowledge of how to get it. And if they are taught, how about teaching responsibilities regarding sexual intercourse?  Let’s not forget flu shots and pneumonia shots and shots for any new virus the WHO declares – look out monkey pox! How did our parents and grandparents live so long without these vaccines? What is happening to our natural immunity when we give so many vaccines?

Has anyone asked if any of these legal drugs – let alone illegal drugs, are harming the development of their pre-frontal cortex which is not fully formed until the age of 25?  But what a great idea! If we attack the brain’s ability to make moral determinations how easy it will be to get them to bend the knee to group think.

I often wonder if the WEF is working with Big Pharma to destroy the ability of our young people to think critically. WEF partners include some of the biggest pharmaceutical companies –  AstraZeneca, Pfizer and Moderna.

And let’s not forget drugs for ADD and ADHD and now depression in young people; especially following the lockdowns of Covid. And how many of our young children are receiving antidepressants as a result of being bullied? Sure they are depressed. But teach them how to be resilient – don’t drug them.  And how do these drugs work? Information is now coming out that anti-depressants may not be working. The SSRI’s that are supposed to reduce depression…don’t. The original hypothesis was wrong yet we give these drugs to young people who are “depressed.”

Between 1991 and 2018, total SSRI prescriptions in the U.S. rose by more than 3,000%. The number of prescriptions for the most common SSRI hit 224 million last year, 224 million prescriptions in a country of 330 million people. In other words you know dozens of people who are taking SSRIs. But it turns out that serotonin deficiencies are not the reason people get depressed. That’s not just a guess. It’s now officially science. This new finding comes from University College London which just completed a long and huge study on the relationship between depression and serotonin. It was published in the Journal of Molecular Psychiatry.

Lead author of the study, Joanna Moncrieff, said; “I think we can safely say, after a vast amount of research conducted over several decades, there is no convincing evidence that depression is caused by serotonin abnormalities, particularly by lower levels or reduced activity of serotonin.”

The makers of Prozac can see that young people who take that drug have an increased risk of suicide compared to those who took a placebo.

But what are their effects on the developing brain?

What about Ritalin and Adderol – stimulants to control levels of two chemicals in your brain, dopamine and norepinephrine, that affect how well you concentrate. Really? Will that be debunked?

How about their effect on the developing brain?

“The adolescent brain is a rapidly developing system that maintains high levels of plasticity. As such, the brain may be particularly vulnerable to drugs that interfere with these processes or modify the specific transmitter systems involved.”  This study provides the first evidence that the use of ‘ADHD’ drugs in children can alter the brain’s development in significant and potentially lasting ways. While these changes did not appear to be connected with significant benefits or harms that were measurable in the short-term period of this study, the authors note that “the long-term consequences remain to be established.”

Reading the side effects should turn you away from these drugs. How many of our children are being prescribed these drugs because they fidget in school – lose concentration? Is it possible that the way we teach is causing part of the problem? Asking young people to sit at a desk for hours at a time? Our ancestors didn’t do that. And now they come home and sit in front of their screens for hours and hours. How’s that affecting their brain?  I’ll tell you. Badly. It negatively affects sleep, mental health, learning, eye health and can lead to weight gain. 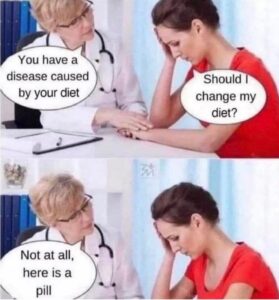 The strongest evidence to date concerns links between marijuana use and psychiatric disorders in those with a pre-existing genetic or other vulnerability.

There is a growing consensus that cannabis use can harm adolescent brains and that cannabis use initiated at a younger age increases the likelihood of developing problem cannabis use. Cannabis use during adolescence is also associated with worse mental health and educational outcomes, and longer-term personal disadvantage. More frequent users are at the highest risk of problems. A growing number of studies in humans indicate that marijuana exposure during development can also cause long-term or possibly permanent adverse changes in the brain. “Some studies suggest regular marijuana use in adolescence is associated with altered connectivity and reduced volume of specific brain regions involved in a broad range of executive functions such as memory, learning, and impulse control compared to people who do not use.”

More Canadians are accessing cannabis legally than ever before. Why not? It’s legal!

And if smoking it isn’t for you not to worry. How about those edibles? Just calls out to young people!

Wana brands  are there for you! When many companies cut corners, using inferior ingredients like animal-derived gelatin and artificial sweeteners, we crafted a vegan, terpene-enhanced, melt-proof recipe that virtually any adult could enjoy.

Well, why not go after the young-uns, we’ve done a bang up job medicating our elderly.

Let’s keep using vaccines and drugs to f*** with our young people! But not to worry! If they get sick or depressed or psychotic, we always have another drug for you! 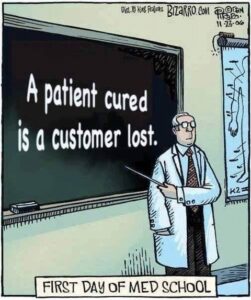 (PS.I believe in drugs. They have helped billions. But perhaps the time has come to take a really good look at the negative effects of our plethora of drugs, before it is too late.)