Stand up for the JDL-Jewish Defense League

I defend myself. Therefore I am!

Stand up for the JDL, the Jewish Defense League. The Jewish people have a right to be safe on our streets, in our synagogues and in our schools. 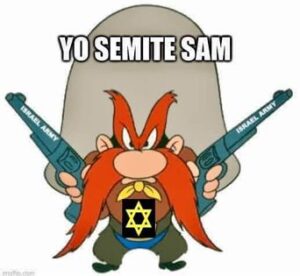 Jews are under attack all over the world. More American Jews suffered hate crime attacks in 2020 than Asians, Muslims, and transgender people combined, according to FBI crime tracking data. Our young people are accosted on campus. It has become so serious that a state-of-the-art security command center was unveiled  by the Secure Community Network to ensure that the Jewish community is prepared in the event of any violence or threats.  National Jewish Security Operations Command Center, JSOCC was built with funding by private donors and gives the SCN – the security arm of the Jewish Federations of North America and the Conference of Presidents of Major American Jewish Organizations – a high-tech, centralized location where its intelligence analysts and security professionals can monitor and track threats to the Jewish community and coordinate responses with its partners including local, state and federal law enforcement.

In Canada at multiple demonstrations across Toronto, Montreal, Edmonton and Vancouver police intervention was required as Nazi salutes, swastikas and burned Israeli flags appeared at some rallies, while counter-protesters violently disrupted some pro-Israel demonstrations.

And yet, here in Canada and in America, the Jewish Defense League, the JDL, an organization that has provided security at Jewish events, is listed as a terrorist organization.

How is it that the JDL is a terrorist organization but Antifa and BLM are not? What is it about the JDL that terrifies so many people, today? I’ll tell you.

These people are cowards. All we have to do is stand tall and face them. And with the JDL at Jewish events and patrolling the streets we will be safer.

Meanwhile, the Southern Poverty Law Center has declared the Jewish Defense league as a radical organization that preaches a violent form of anti-Arab, Jewish nationalism. Right up there with Hamas and Hezbollah right?  No.

The Southern Poverty Law Center — one of the nation’s most outspoken left-wing smear groups — partnered with the Muslim Public Affairs Council and the Center for American Progress in a teleconference  aimed at addressing “Islamophobia” in the U.S. The Muslim Public Affairs Council is an anti-semitic, pro-Hamas/pro-Hezbollah group that is allegedly funded by the Muslim Brotherhood. It is also well-known for blaming Israel for the September 11, 2001 terror attacks in New York City. But, hey, let’s listen to these people.

Classified as a terrorist group by the FBI, the Jewish Defence League, in Canada is also considered by many to be an international right wing organization — a group that is ready to tackle the issue of radical Islam. Not radical Islam? You mean the people that scream from their pulpits and on the streets “Death to Israel”  “Death to the Jews” and attack Jewish students on Campus?

“We’re calling on the police to follow up on this group,” said Salam Elmenyawi from the Muslim Council of Montreal.  Because the JDL has attacked so many Muslims and their organizations, right?

In America, Federal law defines domestic terrorism as acts dangerous to human life that violate the criminal laws of the United States or of any state, and which appear to be intended to:

intimidate or coerce a civilian population;

influence the policy of a government by intimidation or coercion: or

affect the conduct of a government by mass destruction, assassination, or kidnapping.

Does that sound like the JDL to you? How many people have even heard of the JDL? But what about Antifa and BLM? Are they domestic terrorist organizations? Of course not.

Seems the  International Law Enforcement Educators and Trainers Association believe Black Lives Matter and Antifa, an umbrella term for leftist militants, are “revolutionary movements whose aims are to overthrow the U.S. government” and claims they are planning “extreme violence.”

Wonder what Andy Ngo would say about Antifa.  In 2016 the Department of Homeland Security under the Obama administration labeled Antifa efforts as “domestic terrorist violence.”  Attempts today, to designate Antifa as a domestic terrorist organization are taking place, “let’s not forget the violence of BLM and Antifa that happened for months on end this summer.”

But they are not terrorist organizations.

When Jews speak up to defend ourselves we are labeled terrorists?

“To turn the other cheek is not a Jewish concept. Do not listen to the soothing anesthesia of the establishment. They walk in the paths of those whose timidity helped bury our brothers and sisters less than thirty years ago.” —Rabbi Meir Kahane, Jewish Defense League founder

“[I]n the end — with few exceptions — the Jew can look to no one but another Jew for help and … the true solution to the Jewish problem is the liquidation of the Exile and the return of all Jews to Eretz Yisroel — the land of Israel.”— Jewish Defense League’s “Five Principles”

This is an example of the evil of the JDL, the Jewish Defence League.

But it’s OK For members of BLM to attack white people sitting down at a restaurant-for the crime of being white?

Seems the Guardian Angels are acceptable. Why is that?

The Guardian Angels, formed in 1979, is an unarmed civilian patrol group that started out keeping an eye on subway trains during an era when New York City had a high crime rate. Now, they serve as a sort of neighborhood watch group, working to keep communities safe without involving police or politicians. As part of that role, they have in the past often accompanied protests, keeping the demonstrators safe and dealing with any outside instigators or looters.

That’s my experience with the JDL in the 21st century.

So tell me again. Why is the JDL labeled a terrorist organization other than the fact that the world wants to “disarm” the Jews and keep us vulnerable to never ending attacks on our rights to exist as individual Jews and a state.