The Progressives’ road to perdition

Author F. A. Hayek was annoyed with the complete misinterpretation in English “progressive” circles of the Nazi movement, so he wrote the book Road to Serfdom in 1944. He asked:

“Is there a greater tragedy imaginable than that, in our endeavour consciously to shape our future in accordance with high ideals, we should in fact unwittingly produce the very opposite of what we have been striving for?”

“The battle for freedom must be won over and over again.”

The “Progressive” high ideals have met the battle for freedom.

I suggest we are witnessing the Progressives’ road to perdition and a return to the values of 1939.

I am going to take you on a whirlwind tour of Progressives-from great Britain, to Canada, to the USA.

The Progressive Labour party in Britain under the leadership of Jeremy Corbyn considers itself the party of the people-all the people. In 1983 Mr. Corbyn  sponsored the Labour Movement Campaign for Palestine, that pledged to “eradicate Zionism” from the party, saw Israel as a colonial implant in the Middle East and labeled Zionism as a racist ideology akin to apartheid.

Mr. Corbyn praised The Palestinian branch of the Brotherhood, Hamas, for its commitment to “peace and social justice and political justice.” From 2009 to 2012, Corbin was a paid host on the Iranian state-owned Press TV. And it appears that Mr. Corbyn was  “a participating member in a secret Facebook group called “Palestine Live” in which vehement antisemitism was posted, right up until his first weeks as Leader of the Labour Party.

Ken Livingstone, the former Labour mayor of London, is currently suspended from the party over comments he shared about Hitler and Zionism. Other members have been suspended for expressing similar views including and comparing the treatment of the Palestinians in the territories to the Nazis’ treatment of Jews.

At a fringe event titled “Free Speech on Israel,” speakers called for the Jewish Labour Movement (JLM) and Labour Friends of Israel (LFI) to be “kicked out” of the party and said Israel had committed “genocide” in Gaza.

America is a major supporter of Progressive values. Let’s take a look at the Progressives in America; the Democrats, who promote Linda Sarsour, a hijab wearing Muslim woman who says Zionists cannot be feminists. And “Nothing is creepier than Zionism.” She advocates for the exclusion of pro-Israel Jews from activist groups. She supports Sharia law which treats women as second class citizens and insists that wives need their husband’s permission to go out and must never say no to sexual relations. There’s no such thing as marital rape in Islam.

She was recognized as a “champion of change” by the Obama White House.

Then there is Tamika Mallory who along with co-chairs Linda Sarsour, Carmen Perez and Bob Bland (a woman) organized the National Women’s March. Nancy Pelosi and Democrat Senator Kirsten Gillibrand congratulated the women. Gillibrand referred to these women as extraordinary with “the courage to take on something big, important and urgent, and never gave up.”

Ms. Mallory, called “a leader of tomorrow” by Valerie Jarrett, embraces Assata Shakur, a convicted killer who is on the F.B.I.’s list of most wanted terrorists, as a feminist emblem. Mallory admires Fidel Castro, who sheltered Ms. Shakur in Cuba and said about Castro “R.I.P. Comandante! Your legacy lives on!” She does not have similar respect for American police officers. She posted:

“When you throw a brick in a pile of hogs, the one that hollers is the one you hit.”

Ms. Perez and Ms. Mallory are followers of Louis Farrakhan; Ms. Mallory recently attended a rally in Chicago sponsored by the Nation of Islam leader.

Barack Hussein Obama, Maxine Waters and many other members of the Congressional Black Congress are also his followers. 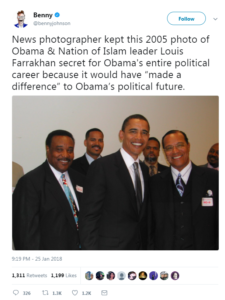 Farrakhan said Hitler is “a very great man” And Judaism is a “gutter religion.” He shared this:

“And don’t you forget, when it’s God who puts you in the ovens, it’s forever!”

2009 Louis Farrakhan meets with members of the Congressional Black Caucus privately after a town hall event discussing the aftermath of Hurricane Katrina. This meeting was at St. Augustine Church in New Orleans, LA.

“In his words and writings since the beginning of 2017 he has continued to preach to his followers that Jews are satanic conspirators who represent the epitome of evil in the modern world. He uses his propaganda machine, which includes a network of Nation of Islam mosques, a weekly newspaper, a “research institute,” occasional speeches, and a robust social media presence to disseminate the notion that Jews are collectively responsible for inhibiting upward mobility in the African-American community, conducting the 9/11 terrorist attacks, and even being responsible for the rise of the Ku Klux Klan in the early 20th century.”

Farrakhan insists that whites are a “race of devils” and that “white people deserve to die.”

Recently he told Jay-Z that he should make Beyoncé put on some clothes. He also opposes gay marriage.

And Sunday February 25, 2018 Farrakhan shared these remarks at the Saviour’s Day Address

“the powerful Jews are my enemy.”
“White folks are going down. And Satan is going down. And Farrakhan, by God’s grace, has pulled the cover off of that Satanic Jew and I’m here to say your time is up, your world is through.”

The video is  four hours long. You can get the highlights here.

And then there is Canada. Our New Democratic Party is headed by Jagmeet Singh the first Sikh to head a party. The NDP is heavily supported by unions, many of whom support the BDS campaign against Israel;the only democracy in the Middle east and most of Africa.

The NDP invited Tamika Mallory, yes that Tamika Mallory of American fame, to speak to them at their most recent convention. Of all the Progressives in the world why did the NDP invite a woman who sympathizes with Farrakhan and his history of anti-Jewish statements?

“It is seldom that liberty of any kind is lost all at once.”

True. We let it slip away, bit by bit until it is too late.  We are taken in by words like “Progressive” as if “Progressive” carries within it “better.” As I wrote at the beginning of the article, back in the 1940’s “Progressive” was all the rage; in Germany.

I suggest, ladies and gentlemen, that today, the Progressives are leading us down the road to perdition.