What is the Trump Virus?

Nancy Pelosi now calls Covid 19, the virus that came to us from China, as the Trump Virus. Well she has the right name but wrong symptoms.

The Trump virus has nothing to do with respiratory failure, or organ failure. Oh no. This virus attacks the brain cells of left leaning people whose bodies seem to have been invaded by the body snatchers. The virus unleashes hate.

Pelosi tells America that Federal police officers are storm troopers. “Unidentified stormtroopers” is what House Speaker Nancy Pelosi, D-Calif., called the law enforcement agents of the Department of Homeland Security struggling to protect the federal courthouse that Portland, Ore., rioters have been firebombing.

Storm troopers? Hitler’s bullyboys? The Brownshirts? The paramilitary wing of the Nazis?

That Pelosi, a member of Congress since time immemorial, refers to federal forces as Storm Troopers, speaks to an evil and a hate that knows no bounds.

And she is joined by House Majority Whip Jim Clyburn who smears Federal Officers as Nazis.  Wonder how those officers feel when they go out to protect and defend Clyburn’s rights under the Constitution.  And according to Tom Ridge, the nation’s first Homeland Security secretary, these Federal Officers are “The president’s personal militia.” Really? What were they under his direction?

I have read that people compare Trump to Hitler or Trump is the worst leader since Hitler. Really?

Since Hitler killed himself the world has lived through (in no particular order) Stalin, Pol Pot, Mao ZeDong, Karl Marx,  Mugabi, the Kim family of North Korea, and China’s leader, Xi Jinping. These “leaders” rounded up citizens for no particular reason and murdered them. They starved their people and made a fortune doing it.

Only an enemy of the American Constitution, like today’s media and far too many Democrats in Congress, could successfully promote narratives like these instead of facts, brainwashing Americans into hate. These attacks on Trump-he is Hitler-is an “ism” of its own. Part of the Trump virus.

Main stream media and the left have been accusing Trump of “isms” – racism, white nationalism, antisemitism – since the day he announced his intentions to run for President. When he was a Democrat, supporting the Clintons, he was “wonderful.”

On July 20, Nancy Pelosi said that if President Trump refuses to accept the results of the upcoming November election, he will have to be “fumigated” out of the White House. (Meanwhile, Hillary and the Democrat Party still do not accept her loss). Fumigation is a technique used against insects, and the idea that human beings are insects has a long history in totalitarian discourse.  Hitler described Jews as “vermin” and “parasites,” a form of dehumanization that is always just one step away from physical violence.

This is the sick evolution of rhetoric in America in 2020. Bought and paid for by the Democrat Party. Sadly, millions of people on the left have no idea what is really going on in America when they read main stream media. They “know” that the protests across are America are peaceful and Trump is another Hitler.

Omar El Akkad lives in Portland and is the author of “American War.” He shared his views of the more than 55 days of “peaceful protests’ in Portland. I read the article in the Globe and Mail in Canada. He refers to the Federal Officers as “federal pseudo-soldiers.”  If not for these “pseudo-officers” he says the protests would have continued to dwindle from exhaustion. And of course, “there was never any real public safety justification for sending a little league militia to a city where protest has been overwhelmingly peaceful, where two months of civil unrest has produced about as much damage as the average tailgate party.” And these same stories are shared in the Washington Post and CNN; the media arm of the Democrat party.

Any wonder why half of America is out of the loop?

These are the facts, literally on the ground.

In Portland, where “protests” have taken place for 60 days, federal agents were hurt during a confrontation as a crowd of more than 1,000 protesters descended on the federal courthouse; 1,000-plus “rioters” also started to remove plywood coverings outside the Hatfield Federal Courthouse — and also threw objects through its windows. Several fires also broke out during the melee and protesters vandalized the building with spray paint while blocking traffic and nearby intersections, Cline said.

“When officers responded to put out these fires, glass bottles were thrown and lasers — which can cause permanent blindness — were shined in their eyes.”

These are the types of high powered lasers rioters have used to damage the eyes of law enforcement. #PortlandRiots #antifa pic.twitter.com/Es5bieo2LO

Another protest: an estimated 2,000 protesters flooded the streets outside the justice center and adjacent courthouse.

In response, more than 100 federal agents shot tear gas and fired impact munitions to disperse the crowd, The Oregonian reported.

On to New York.

Here is  Sak’s being sacked along with hundreds of storefronts looted and vandalized in Manhattan. 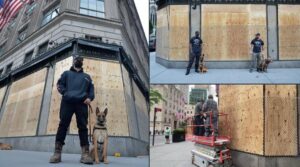 Then there is Chicago. More peaceful protests and protesters.

New video of the protest in Grant Park — taken on the front line  as Chicago officers were pelted with pipes, frozen bottles and explosives.

Members of that so-called organized mob can be seen changing costume mid-march. In the six-minute montage of police camera footage, they are seen changing into all-black clothing behind a wall of umbrellas carried by allies dressed alike.(Because all peaceful protesters carry umbrellas).

An explosive is thrown at officers. One sergeant was left with a broken eye socket. A total of 49 CPD officers were injured, 18 sent to the hospital and 12 protesters arrested.

Then there is Seattle.

And then we learn that the police in Seattle won a case to force media to share protest videos!

Atlanta, following the death of Rayshard Brooks, Wendy’s was destroyed. 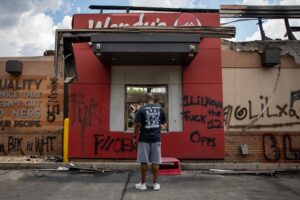 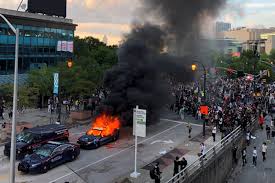 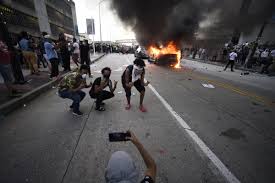 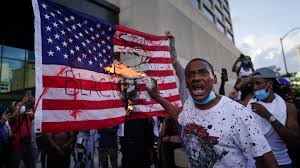 You can find the latest protest information in Atlanta on Twitter @Refusefascism!!!!!! 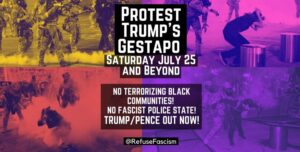 Is it possible that left leaning Americans never see these reports?

Possible? Not just possible – a certainty.

And so the virus spreads.

These viscous attacks on President Trump, and protests, with burning, looting and shooting will continue, until the silent majority speaks up. Hopefully in November.