Announcing the premature death of the balloon 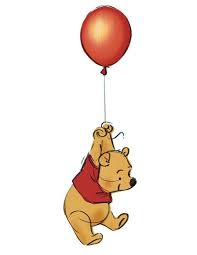 The balloon, as we know, it is now officially dead. Prematurely.

There was a time, not too long ago, when balloons brought smiles to the faces of young and old alike.  There were balloons for birthdays and anniversaries, get well balloons and balloons of congratulation. What child did not want a balloon at the fair or the circus? What adult did not smile upon receiving a balloon? And then there were balloons just “cuz.”

And the books about balloons. Oh the books. Picture books and children’s books and of course the big red balloon in Winnie the Pooh. ”Winnie the Pooh with a red balloon is such a sight to see.” Balloons have always been a joyful symbol of childhood. And remember the sadness of a balloon escaping? Or the thrill of letting a balloon free to fly away to places unknown, sending your wishes with them?

Oh, the simple joy of a balloon.

But that joy is dead. The symbol of the simple joy of childhood is dead.

It died in Israel at the hands of Muslims from Gaza.

Explosives tied to balloons and kites first emerged as a weapon in Gaza, ruled by the Islamist group Hamas, during intense protests in 2018, when the devices drifted across the border daily, causing thousands of fires in Israeli farms and communities, desecrating the  land of milk and honey that had been built with sweat from swamp and desert. Echoes of the burning of Jews in crematoria.

And then the people from Gaza decided to lure children to their death with bunches of balloons. 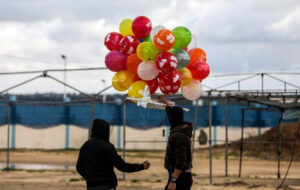 What child could resist a bunch of balloons floating over head? So these people attached bombs to these balloons hoping they would land near a Jewish child in Israel and that the child, being a child, would run to the balloons, full of joy.

And be blown to bits.

Muslims from Gaza have literally and figuratively tied balloons to terror.

Hamas, its ally Islamic Jihad and three other militant parties all have dedicated balloon-launching units, with the smallest being around 180 members. The incendiary part of the weapon is called the “Yassin,” a 900 gram (two pound) device named after Hamas’s founder Sheikh Ahmed Yassin.

We are not afraid and we will return to (using balloons) despite all the threats to target us,” Abu Hamza, said one of the young men preparing the devices. 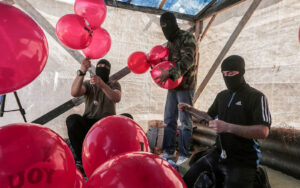 Balloons will never have the care-free meaning of childhood, again, for the children of Israel. They are a symbol of danger. Now, children in Israel are taught to run from balloons. A balloon floating by is a sign of great danger, either bringing fire or death. They are now a perversion of all things innocent.

And where is the world outrage over this war crime, for surely it is a war crime to target children for death, with balloons. How sick is that?  Why are these war crimes not worthy of the front page of a newspaper, breaking news on television, twitter outrage, calls for inquiries at the United Nations? Condemnation from the EU? Where are all the social justice warriors?

Perhaps if the attacks were on other children?

It seems we never learned Never Again when it comes to the Jews.