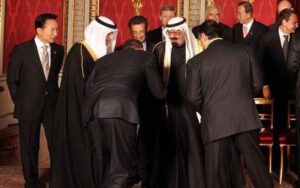 Machiavelli, whom I consider the first behavioural psychologist, witnessed the actions of the Bogias and then advised: If someone says they are going to kill you, believe them. To which I add “Do not appease them.”

In the 1930’s Adolf Hitler invaded the Sudetenland. British Prime Minister Neville Chamberlain chose the policy of land for peace. Sound familiar? Then Churchill took over. Churchill said about Chamberlain “You were given the choice between war and dishonour.You chose dishonour and you will have war.”

We don’t learn from history.

Today, we are faced with a culture, with an ideology that is as hateful as Nazism. It is a culture rooted in honour and shame. When one is slighted, one must take revenge. Appeasement is not on the menu.

For far too long the West has appeased Islam. There is unrest all over the world, from Islam. Terror is their foreign policy. And we ignored the terrorism through wilful blindness, or appeasement. 9/11 was to have been the real wake-up call. It wasn’t. Islam has been testing for decades. Iran is still testing and far too many pundits and professors and think tank leaders continue to push appeasement. It never works. EVER.

Iran is a country that Stephen Harper, past PM of Canada, calls an antisemitic state premised on “religious fanaticism and regional imperialism”(Calipahte)

In May 1979 a group of Iranian students stormed the U.S. Embassy in Tehran and took a group of Americans hostage. Jimmy Carter was the President. The overthrow of Muhammad Reza Shah Pahlevi of Iran by an Islamic revolutionary government earlier in the year had led to a steady deterioration in Iran-U.S. relations. The Ayatollah himself blessed the hostage-taking at the embassy, further fueling the government’s hard line against the United States. Iran’s assets were first frozen by U.S. president Jimmy Carter in 1979. Throughout the ordeal the Iranians used as negotiating leverage the threat of putting the hostages on trial for various crimes, including espionage. The students set their hostages free on January 21, 1981, 444 days after the crisis began and just hours after President Ronald Reagan delivered his inaugural speech.

And so it began.

The Iranian Shiites and the Sunni Saudis spread their wings. It became open season on the West. Constant checking: how far could they push.

In May 1979 Iran’s leaders executed Iran’s Jewish leader, Habib Elghanian for no reason. Between 1979 to 1999 Iran formally executed 20 Jews, arrested and tortured thousands more and confiscated billions of dollars in Jewish properties, businesses and assets. In November 2012 Toobah Nehdaran, a 57-year-old married Jewish woman, was strangled, then repeatedly stabbed to death, and her body was mutilated in a ritual manner by thugs who had broken into her home located inside the Jewish ghetto within the Iranian city of Isfahan. Nehdaran’s gruesome murder was never investigated by Iranian authorities.

What was the world’s response?

April 18, 1983, the United State’s Embassy in Beirut, Lebanon was on the receiving end of a suicide bomb that killed 32 Lebanese, 17 Americans, and 14 visitors and passers-by.

October 23, 1983, an explosive-laden truck was rammed through the guard post at the entrance to the U.S. Marine Battalion Headquarters Building in Beirut. The blast decimated the four-story, concrete, steel- reinforced structure—considered one of the strongest buildings in Lebanon at the time and left 241 dead.

By February 1985, the CIA warned that “Iranian-sponsored terrorism” presented the greatest threat to U.S. personnel and facilities in the region. Inevitably, some of the Hezbollah operatives sent to conduct attacks in places like Kuwait were caught, leading Hezbollah to plot bombings, hijackings, and other operations in places as diverse as Germany and the Republic of the Congo.

Where was the push back?

June 14 1985 WA Flight 847 from Athens to Rome was hijacked by Shiite Hezbollah terrorists who immediately demanded to know the identity of ”those with Jewish-sounding names.”

Did no one notice?

March 17, 1992 a powerful bomb shattered the building of the Israel Embassy in Buenos Aires, taking the lives of 29 people. Hezbollah, calling itself a “party of God”, claimed responsibility for the attack. Highest levels of the Iranian regime were aware of Hezbollah’s intention to carry out the attack and had in fact authorized Hezbollah to carry it out.

On July 18, 1994 there was an attack on the Argentine Israeli Mutual Association in Buenos Aries the largest single attack against a Jewish community in the Diaspora since the Holocaust, leaving 85 dead and hundreds wounded. The decision to carry out the AMIA attack was made, and the attack was orchestrated, by the highest officials of the Islamic Republic of Iran at the time, and . . . these officials instructed Lebanese Hezbollah—a group that has historically been subordinated to the economic and political interests of the Tehran regime—to carry out the attack.

These attacks were possible because Iran had been allowed to infiltrate South America with impunity with its “cultural” outreach.

There was a failure to hold Iran and Hezbollah accountable. It was feared back then that this failure would only ensure further such plots in the future. And it did!

In June 1996 there was truck bombing in Dhahran, Saudi Arabia that killed 19 U.S. military personnel. A tanker truck loaded with 25,000 pounds of explosives ripped through the U.S. Air Force military housing complex Khobar Towers in Dhahran, Saudi Arabia, killing 19 U.S. airmen and wounding nearly 500 others. The terror attack was committed by members of the Saudi Hezbollah, with backing from Iran, as a way to force U.S. troops out of Saudi Arabia and the Persian Gulf.

Despite all the terror coming from Iran, in 2015 under the authority of Barack Obama, Iran was bequeathed billions of dollars in order to get her to sign a toothless nuclear treaty. Iranians understood that when Obama failed to strike Syrian president Bashar al-Assad in September 2013 for crossing his redline against the use of chemical weapons, there was no way the president would ever order military action against Iranian nuclear facilities. Obama even liked Solomeini and his abilities to develop a deep bench of effective proxies willing to advance its interests. Obama stated “ideally, we would see a situation in which Iran, seeing sanctions reduced, would start focusing on its economy, on training its people, on re-entering the world community, to lessening its provocative activities in the region.”

Where do you suppose that money went? Did it go to the people in Iran? No. It was sent to Iranian proxy terror groups especially those targeting Israel and Jews. Calls for “Death to Israel; Death to the West Death; Death to America” continue to be heard.

Too many have turned a blind eye to history. For 40 years, the Islamic regime of Iran has relentlessly pursued a global Islamic mission which was engineered by jihadis Ayatollah Khomeini, Iran’s founding dictator. Khomeini said in his own words, “We will export our revolution to the entire world.”  There has been little resistance until this year,when America stood up and said Enough.

On Dec. 27, 2019, Iran’s proxy militants in Iraq attacked a U.S. military base in the country, killing an American contractor. Following a retaliatory U.S. airstrike, Iran-backed protesters stormed the U.S. Embassy in Baghdad. And the President, having watched other attacks by Iran, and witnessing the death of an American, his red line, decided enough was enough. And he took out the number one terrorist, Solomeini.

This January, Iran “accidentally” took down UKRAINE FLIGHT PS752, murdering 176 people including 82 Iranians, 63 Canadians and 11 Ukrainians as well as nationals from Sweden, the UK, Afghanistan and Germany.

Instead of attacking Iran for the flagrant murder of innocent civilians, all the world standing together,  Donald Trump was blamed for taking out the terrorist leading to the take down of the plane. And the main stream media was the number one “blamer” and lead cheer leader. They mourned for a TERRORIST. Shared his funeral. Promoted the false idea that the Iranian people were distraught over the death of Solomeini.

What do you think was going on in Iran? I’ll tell you. They laughed at the West. The media took an attack on a plane and blamed the President of the USA instead of the number one terrorist country in the world. The main stream media does all the propaganda work for Iran, demeaning and belittling the President, inferring the President is senile, or irrational. Canada’s Prime Minister Justin Trudeau was one of the western leaders who implied that it was Trump’s fault. Canadian Michael McCain, CEO of Maple Leaf Foods blamed Donald Trump.  Iran couldn’t have asked for a better response if they had planned it.

The years of appeasement, and wilful blindness led to the downing of flight PS752. The blame rests securely on the professors, pundits and politicians who behaved like Chamberlain. Blind to the historical fact that appeasement kills.