Canada: The Culture of Death and the Death of Culture 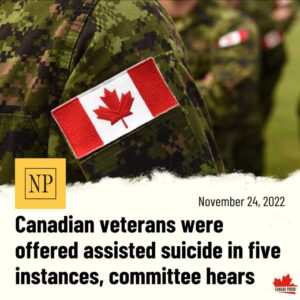 Mr. Knight, 75, is the founder of the Voluntary Human Extinction movement.Their goal is an Earth without people.  He calls humans the “most destructive of invasive species, and as super predators.”

Population control used to be the result of nature: natural disasters like hurricanes, volcanoes, earthquakes, disease. Thomas Malthus gave us The Malthusian Theory of Population: the theory of exponential population and arithmetic food supply growth. Nature has its own ways of keeping a check on the increasing population. It brings the population level to the level of the available food supply. When the increasing population rate is greater than the food supply, disequilibrium exists. As a result, people will not get enough food even for survival. People will die due to a lack of food supply. Adversities such as epidemics, wars, starvation, famines and other natural calamities will crop up which are named as positive checks by Malthus because they increase mortality rates, thus keeping the population in check. They are countered by man-made “preventive checks,” which also control the population by reducing fertility rates; preventive checks include birth control and celibacy.

We have fired up preventive checks with a culture of death. In my view, this culture of death began with the promotion of abortion. Abortion started as safe and rare to safe and always. Change your mind in the third trimester – no problem – we can get rid of that fetus. Change your mind at birth – not a problem – you can have abortion at birth. I heard one young woman say that she felt it was kinder to abort a baby with severe deformities later in term than have the baby suffer at birth. Really? Does she know that the fetus is torn limb from limb to remove the baby; especially if performed by Planned Parenthood who harvest organs for sale? She had no concept of holding the baby and saying goodbye, lovingly with care and compassion. How did that happen? How did we get here?

Today, we not only advocate for all out abortion, Dr. Louis Roy of Quebec College of Physicians and Surgeons, is calling for euthanasia for new born children up to the age one if the child has “grave and severe syndromes” or “severe malformations” or “prospective of survival is null, so to speak.” So to speak?  Different name; same result. Let’s just kill the baby.

In Iceland, children with Down Syndrome are vanishing because of the promoting of aborting these children. What’s next? Who is next?

Canada, that wonderful country, is making changes to Medical Assistance in Dying (MAiD). We are not only promoting the use of medically assisted aid in death for adults, like my friend whose death was imminent from a disabling condition like Lou Gehrig’s (ALS) , now Canada is offering  death to desperate Canadians, suffering from chronic pain to the inability to obtain home care, in lieu of treatment the system can’t (or won’t) provide them.

In 2021, Canada’s Parliament passed Bill C-7, further expanding Canada’s euthanasia law to permit doctors to end the lives of patients with disabilities or chronic illnesses that are not terminal. This means that it will no longer be required for a person’s death to be reasonably foreseeable to receive MAID services. Euthanasia eligibility will also automatically extend to those suffering from mental illness in March of 2023. Just mental illness. Now, there was a time when we fought against mentally ill people taking their own life because life is sacred. God said: “Choose Life.”

But there’s more. Canada is offering homeless veterans the option of having their life ended. Canadian Forces members have come forward with allegations that a Veterans Affairs Canada caseworker offered  medical assistance in dying after he asked for support for post-traumatic stress disorder.

A Veterans Affairs caseworker suggested medical assistance in dying was a better option than “blowing your brains out.” A combat veteran was offered MAiD twice — despite repeatedly dismissing medically assisted suicide — and was told that Veterans Affairs had carried out the service for others.

Trudeau  told us 2018 “Why are we still fighting against certain veterans’ groups in court? Because they’re asking for more than we are able to give right now.” Hmm, we don’t have money for vets but we do for Ukraine and Haiti.

Canada has seen a major increase in MAiD deaths each year, with more than 20,000 Canadians having now died by MAiD.

Until now, Canada has resisted expanding assistance in dying to children under the age of 18, but there has been some consideration given to making it accessible to “mature minors.” What does that mean? What is a “mature minor” ? We are allowing “mature” minors to obtain transgender surgery; removal of breasts, castration. So why not death?

The Quebec College of Physicians recommended making MAID accessible to minors from 14 to 17 years old, with the authorization of parents or of a tutor, adding that suffering has no age and that it can be as intolerable as for adults.  A parent authorizing the death of their child? What have we become?

But Canada does not want to leave out the right to die for the mentally ill. Starting in March 2023 Canada is making it easier for people with mental illness- let me repeat mental illness to have the government kill them. Washington based psychiatrist Dr. Scott Kim says Canada is about to become the most liberal country in the world in allowing those with mental disorders to access assisted death.

Not to worry: Dr. Ellen Wiebe, who’s already provided MAiD to more than 400 people with physical illnesses, argues the new rule acknowledges the plight of those suffering from intolerable mental illnesses.

“Mental illness and physical illness both can cause unbearable suffering…If you are suffering unbearably, you’ve got the right to say, ‘I’ve had enough’ and you’ll go through a process with safeguards,” says Dr. Wiebe.

John Scully a man who with mental illness wants the right to access MAiD. MAiD promises him relief from almost four decades of mental suffering. But its arrival also makes him sad.

“It just formalizes the utter failure of psychiatric medicine,” he says.

Oh, so it’s lack of access to care more than the desire to die.

There are long delays in accessing psychiatric care in Canada. I have a mental illness and was going through a very dark time. It took one year for me to access mental health care; which turned out to be a 30 minute appointment and a prescription for an antidepressant: which made me physically ill.

The National Post reports that most jurisdictions in the world with legalized MAID prevent doctors from raising the practice with patients out of fear that some may be influenced into having their life ended: “Given the power dynamic of the doctor-patient relationship.”  In Canada, there are no legal restrictions on who can bring up MAiD. Guidance documents given to Canada’s providers of medically assisted death say that doctors must bring up medical assistance in dying (MAiD) as an option when it’s “medically relevant” and if the person is likely eligible, as part of a doctor’s duty to provide informed consent.

Canadian Association of MAiD Assessors and Providers Vice President, Dr. Konia Trouton, stated: “We have to make sure that people are aware of their options. Awareness is not the same as coercing them or pushing them in that direction.” Right.

But there are those who are concerned.  University of Toronto bioethicist Kerry Bowman shared: “Some people, no matter how well-handled your conversation, may infer that it’s essentially a suggestion. They would also definitely infer that they have the strong potential to meet eligibility criteria, or you wouldn’t be offering it.”

He also stated, “The expansion of MAiD to those not at imminent risk of dying adds another layer of complexity and debate. I also see it as very problematic when we bring (MAiD) up to people who can’t pay the rent, or people who are living with disability who don’t have adequate access to the things that they need,” Bowman said. “You have a person who is severely depressed where the nature of the illness is often accompanied by a desire to die. The person takes a step to go and see a mental health counsellor to get help, and is being told, as part of the informed consent procedure, we can have treatment a, b, c or MAiD.” “It’s being sold as a normal medical practice.”

Imagine that. An elderly person, still coping, still enjoying life but feeling like a burden (my mom told me she felt like a burden) is given several options for care, including government assisted death. Would my mother have thought, oh that’s what I should do? Would someone living in a long term care facility think that? Would a young person with severe health problems be given that option?

Seems killing the elderly is discussed out loud. Listen to Bill Gates. There are those who tried to deny his statement. Here he is.

And then there are Covid vaccinations.

“It is also important that physicians work with their patients to manage anxieties related to the vaccine and not enable avoidance behavior,” wrote the CPSO(College of Physicians and Surgeons of Ontario).  Ahhh, psychiatric drugs to help Canadians accept vaccines!

Well, in Canada we may need all this help because the government of Canada is thrilled to be bringing in 500,000 immigrants a year.  Where will we put them? How will we care for all these people?

My goodness, my leaders put hitler to shame.

What happened to our foundational ethic that ALL LIFE IS SACRED?
Not in Canada.

The culture of death leads to the death of culture.