When Justin Trudeau was elected PM of Canada in 2015 he declared:

“To this country’s friends all around the world, many of you have worried that Canada has lost its compassionate and constructive voice in the world… We’re back.”

I would ask, back where?

The recently re-elected  Prime Minster of Canada, Justin Trudeau, has aligned Canada with autocrats, despots and human right abusers. He is standing shoulder to shoulder with Iran and North Korea against Israel, the only democracy in the Middle East, the only Jewish state with 7 million Jews, half of the world Jewish population, in a world of 193 countries, 23 of which are Muslim-only failed states with 230 million Muslim citizens, surrounding her. He stands for another Muslim state on more land that legally and historically belongs to Israel.

He stands with supporting PA and its pay for slay while even the Netherlands walks away.  You can read a firsthand chilling account of this policy in Kay Wilson’s book The Rage Less Traveled. Perhaps the PM should read it. By standing with Iran and North Korea he is condoning the policy of murdering Jews for the crime of being Jewish. Does that sound familiar? It should. We lived through this less than 70 years ago. How easy it is to forget.

He is prepared to throw away Canada’s morals, values and ethics for a seat on the Security Council of the UN, a corrupted and visibly Jew-hating organization. It is nothing less than a Faustian deal with the Devil in return for the soul of Canada.

As reported by Lorrie Goldstein, in the Toronto Sun,

“Trudeau had no hope of winning the Security Council seat as long as the Israel-loathing UN General Assembly viewed Canada as a strong ally of Israel and aligned with Trump on the Mideast.”

He now leads a minority government and will require the aid of members from other parties to complete his mission. Not to worry. Jagmeet Singh, the leader of the NDP, has declared his party’s support for the antisemitic organization BDS. The Boycott, Divestment, Sanctions (BDS) movement works to end international support for Israel’s oppression of Palestinians and pressure Israel to comply with international law. One has to agree that Israel is oppressing Palestinian, when it is well known that the oppression comes from their leadership, Hamas and the Palestinian Authority. As for the Prime Minister, one would hope that he is well versed on the facts, not the antisemitic fiction.

There are those in Canada who stand with Trudeau because he has moved away from the policies of Donald Trump and America that protect Israel, allow her to have her capital in Jerusalem her only capital for 3000 years, to live in all the areas of Israel, which include Judea/Samaria, too often referred to as the West Bank. The Trump administration says it doesn’t consider Israeli settlements in the Occupied West Bank in violation of international law. Trudeau’s Canada stands with Iran and North Korea demanding that these areas be cleansed of all Jews and turned over to the Palestinian Authority.

Our PM has a fondness for tyrants.

He shared his fondness for Fidel Castro at his funeral, complimenting him as “remarkable” and a “larger than life leader who served his people,”  and ignored the Cuban leader’s human rights abuses and record of political oppression. Trudeau added that his late father, Canadian Prime Minister Pierre Trudeau “was very proud to call him a friend.” Castro had been an honorary pallbearer at his father’s funeral.

The statement concluded: “We join the people of Cuba today in mourning the loss of this remarkable leader.”

While Iran tightens its grip on her citizens, it appears that our esteemed human rights promoter is silent. 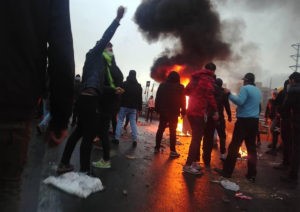 Trudeau remains in the Iran Treaty despite the fact that Iran has taken the billions given to them by Obama to spread terror throughout the region, particularly Israel.

And stands shoulder to shoulder with North Korea; a country that remains one of the world’s most repressive states routinely uses arbitrary arrest and punishment of crimes, torture in custody, and executions to maintain fear and control over the population. The government and security agencies systematically extract forced, unpaid labour from its citizens— including women, children, detainees, and prisoners—to build infrastructure, implement projects, and carry out activities and events extolling the ruling Kim family and the Workers’ Party of Korea (WPK).

Trudeau is willing to overlook these “deficiencies” so he can sit at the table with leaders like Kim Jong-un at the UN Security Council.

And then there is his admiration for China. In 2013 he said in response to the question which nation he admired most:

“There’s a level of admiration I actually have for China. Their basic dictatorship is actually allowing them to turn their economy around on a dime.”

That statement was upsetting for people who say they were wrongly imprisoned or tortured by the Chinese government for speaking out for democracy.  It appears that Trudeau’s affection for China is not reciprocal.

Our Prime Minister talks about women’s rights and human rights. Yet he stands shoulder to shoulder with Iran, North Korea, and China while walking away from Israel.

What will he say of he say if he does not get that coveted seat? Would it  still have been worth the deal?