Crime: It’s not about black or white; it’s about family: the smallest unit of authority in a civilized society 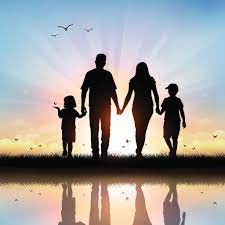 Yes, some things are black and white and not based on race, colour, creed or sexual orientation. There is absolute right and absolute wrong.

In the West we know the difference between right and wrong because our culture is firmly rooted in the Judeo/Christian ethic. Of the many teachings, six are most important for a civil society: Honour your mother and father: please note father. Do not murder; do not steal; do not commit adultery or incest; do not gossip and do not covet. These are personal responsibilities. We are to learn them from our parents; our family; the smallest unit of authority in a civilized society.

Except, somewhere along the way, something happened. We started to promote rights over responsibilities. My rights! All about me. My grandiose infantile delusions of rights. Right. I guess it was assumed (error) that people with God given rights would know they come with responsibilities. Otherwise, society crumbles. It is not possible, nor was it ever meant to be, that we have governments and bureaucracies policing us all the time. We are expected to limit ourselves. Follow the social contract. Control our desires. Conform to the Judeo/Christian ethic that underpins our Constitutions.  Responsibility.

Yet, take away the police and remove penalties for breaking the law, and it seems there are those who think it is a call to arms – to go out and take whatever you want, whenever you want and kill people whenever you feel like it. No sense of personal responsibility.

According to the FBI, in 2019 there were more than 10 million arrests in the United States, excluding traffic infractions. There were more than 1.2 million violent crimes and more than 6.9 million property crimes with the remainder being other miscellaneous offenses.  The facts show, however, nearly all crime in America is gang related, economic or domestic in nature.

Why is it that there are some people more prone to break the law when the law is no longer there; when external restraints are removed, while others continue to self-regulate?

Look what happened in Florida. Governor DeSantis had to remind people that looting will not be tolerated following Hurricane Ian.

“The other thing that we’re concerned about, particularly in those areas that were really hard hit, is, you know, we want to make sure we’re maintaining law and order.”

Yet, Joy Reid’s knickers went into another knot. She felt this was a racist threat! Why? What made her think he was talking about people of colour and not all people?

We know children growing up in healthy, married, two-parent families are more likely to lead happy, healthy and successful lives than those who have not experienced the same level of family security and stability.

There is also overwhelming evidence that those who grow up in a fatherless home will not have the restraints necessary to self-regulate. Sadly, boys without fathers too often fall into gangs.There is a reason that God created man and woman and that the two shall come together as one and create a new human being.  Fathers provide 50% of the genetic code. This may come as a shock but sons share the same male chromosomes, the extra testosterone and the same anatomy. Sons need fathers to teach them about respect, especially to respect their mother for this will teach them to respect women, love, self-restraint, and finding their purpose. High levels of father involvement are correlated with higher levels of sociability, confidence, and self-control in children.

As we normalize fatherless families, self-control is diminished, our society falls apart.

“Masculinity and manliness, the twin attributes of patriarchy, are being criminalized along with vitality, exuberance and displays of moral authority in men and young boys by a phalanx of radical feminists, ‘woke’ progressives, and systemic nihilists. The goal of these forces is to advance a systemic, nihilistic, gynocentric paradigm that has ushered in an era that will destroy not only men, but civilization itself.” He also writes about “fatherless boys committing a disproportionate number of crimes and rapes in America and across the globe, and the need for society to be radically redesigned along traditional gender roles. This is, fundamentally, because men’s natural role to lead with moral authority — rooted in their biological natures — has been usurped in the name of egalitarianism and equity.”

“(T)he child is father to the man: and think how many inner-city black children are without parents, relatives, neighbors, teachers, coaches, or clergymen to teach them right from wrong, give them loving and consistent discipline, show them the moral and material value of hard work and study, and bring them to cherish the self-respect that comes only from respecting the life, liberty, and property of others. But to the extent that the justice system hurts, rather than helps, blacks more than it does whites, it is not by incarcerating a “disproportionate” number of young black men. Rather, it is by ignoring poor black victims and letting convicted violent and repeat black criminals, both adult and juvenile, continue to victimize and demoralize the black communities that suffer most of their depredations.”

“Numerous studies show that each succeeding generation of young male criminals commits about three times as much serious crime as the one before it: the occasional fatal knife fight of 1950s street gangs has given way to the frequent drive-by shootings of 1990s gangs.” And this article is from 1996. READ IT

Larry Elder recently gave insight into the woke agenda for blacks. He stated:

Black Americans benefited “a strong belief in the values of America” following the American Civil War, including high rates of marriage and commensurate low rates of divorce, entrepreneurship, Christian faith, and patriotism. The Black Lives Matter operation, he added, amounts to “a very assault on what made black people survive and thrive after slavery.” Elder warned that high rates of single-parenthood among blacks in recent decades relative to earlier American history is predictive of a broader national trend of increasing familial collapse. “Women have been incentivized to marry the government, and men have been incentivized to abandon their financial and moral responsibility, and that’s not just affecting the black community. Now 25% of white kids are born outside of wedlock. Forty percent of all American kids are now born outside of wedlock, something that would not be possible if not for our subsidization of slovenly behavior.”

Victor Davis Hanson wrote: “Look at the YouTube big-city victims of inordinately black-male violence (six percent of the population responsible for 50 percent plus of all violent crime) and the attacked are increasingly Jews, Asians, and Latinos.”

We have arrived at a place where looting is normalized.

In August 2022, store security guards in New York City stood back helplessly as looters took over.

Well, not to worry. There is an explanation. We can thank NPR for providing this information. Vicky Osterweil’s book, In Defense of Looting, gives us the answer:

“Often, looting is more common among movements that are coming from below. It tends to be an attack on a business, a commercial space, maybe a government building — taking those things that would otherwise be commodified and controlled and sharing them for free.”

“But there’s also another factor, which is anti-Blackness and contempt for poor people who want to live a better life, which looting immediately provides. One thing about looting is it freaks people out. But in terms of potential crimes that people can commit against the state, it’s basically nonviolent. You’re mass shoplifting. Most stores are insured; it’s just hurting insurance companies on some level. It’s just money. It’s just property. It’s not actually hurting any people.”

So that’s the justification. Not the breakdown of family. And boys without fathers.

I’d share more but length of the article restricts me. READ the article.

The rate of U.S. gun deaths surged 35% in 2020 to the highest point since 1994, with especially deadly levels for young Black men. African Americans as a whole were at least four times more likely to be killed by a gun than the overall population, and 12 times more likely than a white person, the data showed.

Among African Americans, the firearm homicide rate was 26.6 deaths per 100,000, a 39.5% increase over 2019. For white Americans, the rate was 2.2 per 100,000.By raw numbers, there were 19,350 gun homicides in 2020, with African Americans accounting for 62% of the total and white people 21%. The study found the reasons for widening inequality were “unclear and potentially complex,” noting the COVID-19 pandemic might have “exacerbated existing social and economic stressors.” But race played a distinct role, as other minorities were also found to have higher rates of gun deaths.

Yet for all the calls for gun control, there are those in the Black Community who are fighting against it.

There was a 58.2% increase in gun purchases by Black men and women during the first half of 2020, when the coronavirus pandemic swept through America, according to the most recent survey of gun retailers by the National Shooting Sports Foundation. The gun industry group said it was the highest firearms sales increase of any demographic.

Maj Toure, founder of Black Guns Matter, a pro-gun group founded in 2016 after the emergence of Black Lives Matter, said he believes that gun control is part of an ongoing government effort to disarm Black people. “Gun control is racist,” he said.

Crime is not about race: black and white.