Culture will not thrive when the children are committing suicide 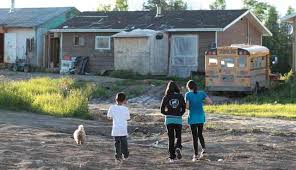 A great deal is written about Indigenous peoples around the world. Archeologists have provided reams of information about first peoples on all continents. Canada’s First Nations people are genetically related to people in parts of Asia.  There are more than 630 First Nation communities in Canada, which represent more than 50 Nations and 50 Indigenous languages. That is remarkable. The Indigenous people represent 4.9% of the national population and are the fastest growing demographic cohort in the country.

Imagine the blessing of living in community: one homogenous group with common shared values, morals, language and spiritual beliefs living on their ancestral home. No need to worry about funding programmes on diversity or the need to accommodate, include or tolerate another group of people. There are so few who can claim that life style.

Yet, with all of these incredible advantages, something has gone terribly wrong in Canada’s First Nations.  “Despite the myth that Aboriginals lived in happy harmony before the arrival of Europeans, war was central to the way of life of many First Nation cultures. Indeed, war was a persistent reality in all regions. Revenge was a consistent motivating factor across North America, a factor that could lead to recurrent cycles of violence, often low intensity, which could last generations. As early as the year 1000, Huron, Neutral, Petun and Iroquois villages were increasingly fortified by a timber palisade that could be nearly 10 metres in height, sometimes villages built a second or even third ring to protect them against attacks by enemy nations.”

We have read a great deal about colonization of Canada, new tribes coming in, and the destruction it brought to those already living here. Over time, many treaties were signed with the various tribes and nations/confederacies. These treaties are beyond my pay grade. I have no idea how the different treaties affect the relationship. Are Indigenous peoples encouraged to stay on reserve? Do families who leave the reserve get the same subsidy as those on reserve? Are there penalties for leaving the reserve? How is money allocated?

I will not address these questions in this article. Rather I want to focus on the children. Without healthy children; mind, body and soul, there is no culture. Keep in mind, Canada is allocating $4.5 billion over the next 5 years in new funding towards Indigenous peoples and spending will reach $17 billion by 2021-22. You can read all the details here. Canada will also pay up to $750 million in compensation to thousands of aboriginals who were forcibly removed as children from their families decades ago, promising to end “a terrible legacy.”

Sadly, these financial investments seem to be failing.

There is no doubt that many children, today, are the descendants of Native peoples taken away from their reserves and adopted by non-Native families. And for too long, the Church tried to assimilate native peoples into Christianity. In 2015, an official report said the schools were an attempt to end the existence of aboriginals as distinct legal, social, cultural, religious and racial entities in Canada. But everything that has been done over decades to keep children in their unique culture, often in isolated areas and reserves, has not gone well, either. While working to maintain Indigenous culture, far too many children are taking their own lives. Too many adults are addicted to drugs and alcohol and suffer from mental illness.

This report is frightening

How does one get their head around these numbers?

“Almost one-third of First Nations adults on reserve are unemployed, compared with less than one-tenth of the general population. Fifteen per cent of the people who are not participating in the labour force said there was simply no work to be found in their community or that they had given up looking.”

Indigenous children face the highest rates of poverty in the country with almost one in every two First Nations children living in households with low incomes says a new study written by the Assembly of First Nations, and the Canadian Centre for Policy Alternatives.

“Canada is not tracking First Nations poverty on-reserve so we did,” said AFN National Chief Perry Bellegarde in a statement. “The findings of this report are shameful and underscore the urgent need to invest in First Nations children, families and communities.” The study, published by the Upstream Institute, finds that 47 per cent of First Nations children on and off reserve live in poverty. That figure rises to 53 per cent when looking at First Nations children living on reserves, the highest rate of child poverty anywhere in Canada.

Indigenous youth are one of the fastest growing segments of Canada’s population. They’re also near the top of the list of Canadians most likely to die.  A new study published in the Canadian Medical Association Journal gives one of the main reasons. The leading cause of death was overdose. Illness was the second leading cause of death, followed by suicide. Many people who use intravenous drugs are infected with hepatitis C.  In the study, those infected with hepatitis C were more likely to die than those not infected. The suicide death rate among young Indigenous Canadians is high, but for women, it’s even higher — double that of young Indigenous men.

No children, no culture.

“There are many studies to try and explain these numbers. Residential school survivors and those whose parents or grandparents attended were more likely to have considered suicide at some time in their life and had higher rates of binge drinking and drug use, including marijuana and opioids. For example, one in four teenagers on reserve who had a parent who attended a residential school had considered suicide, compared with one in 10 teenagers who didn’t have a parent or grandparent attend.”

There is no denying that trauma can affect generations of people.  We rarely get to choose events that befall us, or grace us. We do have the ability to choose how we will respond. Will we be bitter or better? Will we be a victim of circumstance or rise above it?

I am Jewish. I have studied the history of the Jews and it is filled with 3000 years of prosecutions, persecutions, pogroms, inquisitions, expulsions, ghettoization, concentration camps and death by gas chamber.  All for the crime of being Jewish.  I have friends whose parents survived the Holocaust, the death camps. All of the children have been damaged in some way. Some parents remained silent so the children could never understand the family dynamic. Others spoke, but how does a child come to understand the horror of a military industrial attempt to eradicate an entire people?

As a people, the Jews have refused to be victims. When deprived of all rights to own land or to work, education remained most important. It can be transported. It provides hope. And the Jewish people wrote their history and traveled with it wherever they were forced to flee.

I have to admit that I cannot understand victimhood. And in this day and age of victimhood and blame, what I have to say is not politically correct. There are those who may say that it is hard-hearted. I suppose the point is that victimhood has never helped anyone rise up. And one can and must choose not to be a victim in order to thrive. And then access the help needed.

Mark Milke has a new book called The Victim Cult: How the culture of blame hurts everyone and wrecks civilization. He wrote that  “a culture that embraces education, family stability and a spirit of entrepreneurism” will do well.

Barbara Kay shared some of his views exploring why some societies thrive after trauma and others don’t:“Indigenous poverty on reserves is not caused by colonialism, but by geographic distance from job sources. Natives living near metropolitan areas, such as the majority of the Métis, are close to income parity with non-natives. He is skeptical of the utility of formal apologies (‘it is not clear that government regrets add much to the overall stock of human compassion’) and strongly critical of, amongst others, the 2019 MMIWG (Missing and Murdered Indigenous Women and Girls) report: ‘The authors missed the mark because they were possessed by the notion that the strongest cultures are those uncontaminated by outsiders — a false and dangerous assumption.’”

Living on Reserve, isolated from others, is affecting the children. The young people see what is happening in the greater world. Is it possible that children and families feel constrained by expectations of the Elders to live on reserve, when they want to leave, and these expectations are leading to feelings of failure, guilt, shame and hopelessness?

Culture will not thrive when the children are committing suicide.

I understand the desire to pass culture down from one generation to another. It is who we are. It connects the present to the past and then reaches forward. I understand the desire of all First Nations to keep their culture on their land. But to what end? How far are the leaders prepared to go to save their culture on Reserve? How many children are they willing to sacrifice? 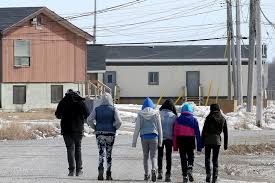