The time for playing defense-what I call “Jewsplainin” is over.

Dear Jews: Stop playing defense: It’s time to ask questions and demand answers of those who promote attacks on the right of Israel and the Jews to exist.  You know, the people who scream “Palestine will be free from the river to the sea.”  How very loving of them.

These attacks are promoted by main stream media and the United Nebbishes, I mean the United Nations, now an organization run by autocrats and despots who want nothing more than to destroy western culture and the Judeo/Christian ethic that underpins our freedoms. And let us not forget the EU.

We, Jews, are really good at asking questions.  Asking questions is our go-to and default position. We just celebrated Passover; with questions! Our Sages teach that parents should not ask a child on return from school, “Did you have a good answer, today?”  Or “Did you ask a question, today?” No, we are told to ask “Did you ask a GOOD question, today.” Questions promote critical thinking; something in short supply, today, that makes it possible for extraordinary disinformation to be shared.

Let’s try to be more like Students Supporting Israel (SSI)

You got that right!

This organization counters the Israel Apartheid week activities on campuses around the world with “Palestinian Apartheid Week” highlighting systemic discrimination against Jews in Palestinian-controlled territories such as the Judea/Samaria (West Bank) and Gaza Strip.

When the Muslims question the Jews about the first People in Israel, when people accuse Israel of being an apartheid state, let’s go on the offense and ask questions.

Palestinian Muslims and their champions claim that they are the indigenous people of Israel. Really? OK.

First, a brief history of the land people call Palestine (we must thank the Romans.)

Before Israel, there was a British mandate, not a Palestinian state, an Ottoman Empire, the Islamic state of the Mamluks of Egypt, the Ayubid Arab-Kurdish Empire, the Frankish and Christian Kingdom of Jerusalem; the Umayyad and Fatimid empires; the Byzantine empire; the Sassanids; the Roman Empire, Hasmonean state; the Seleucid empire; the empire of Alexander the Great; the Persian empire; the Babylonian Empire, the Kingdoms of Israel and Judah, the Kingdom of Israel, the theocracy of the twelve tribes, an agglomeration of independent Canaanite city-kingdoms.

So where is that Muslim Palestinian state?

The Hebrew Bible tells of the Israelites entering Israel about 3500 years ago; as a people and a nation. So where were you when the Jewish people came into the land of Israel and Judea and Samaria with the Jewish ethic given to them by God in the desert? We know this is true because of the Bible. Are you questioning the Bible? Perhaps there is mention of Palestinian Muslims in the Koran? Is there mention of Jerusalem in the Koran? No! Oh.

You say you are the indigenous people of Israel/Palestine. Indigenous, as in the FIRST. OK. You have a mosque in Jerusalem. Hmmm. Sits on top of the First and Second Temples of the Jewish people. On top of temples built first in 957 BCE, and then the Second Temple period (586 BC-AD 70) Could you please square that circle? Explain the discrepancy? How is that possible that the Mosque was there first?

You say you are the indigenous people of “Palestine” so please share with us all of the artifacts you have collected and displayed in the Palestine Museum of History. Oh wait. There is no museum highlighting the 3500 year history of Palestinian Muslims in Palestine. I see you have the  Palestine Institute for Biodiversity and Sustainability (PIBS) and the Palestine Museum of Natural History (PMNH)  “established to research, educate about, and conserve our natural world, culture and heritage.”OK, please share photos of the artifacts you have from, how about 2500 years, ago.

Here are Jewish artifacts; coins  from around the period of time described in Ezra and Nehemiah. The two biblical books record the Jewish people returning to Jerusalem and beginning the construction of the Second Temple by the decree of Cyrus the Great, the king of Persia. The coins were minted when the Jews were allowed semiautonomous rule of a province called Yehud Medinata with Jerusalem as its capital under the Persian Empire. Ok, how about urns or jewellery. Or historical reports by other nations of the times like the Egyptians. The Romans. Anyone. How about cemeteries on the land. Where are the Palestinian Muslim cemeteries from, let’s say, 2000 years ago?

Yet, you say you are the first peoples of Israel/Palestine. Here is a map, based on historical records of the Levant 830 BCE. Where is Muslim Palestine? And look at this. Mention of ISRAEL in 1200 BCE by Egypt, of all countries.

Israel as a cultural entity is first mentioned in the stele of the Egyptian pharaoh Merenptah (r.1213-1203 BCE) in which he states that “Israel lies devastated, bereft of its seed.”

They thought Israel was destroyed. But no. Yet, no mention of the Muslim Palestinians. Why is that? Where were your Palestinian Muslims? Not fighting with Egypt?

Here is another mention of Israel from the 9th century BCE, a fact corroborated by an inscription on a commemorative stela which is to date the only extra-biblical proof from that period of the existence of King David.

This unique Aramaic inscription, part of a monumental stone slab commemorating the military victories of Hazael, king of Aram, contains the earliest reference to the Davidic dynasty outside the Bible. 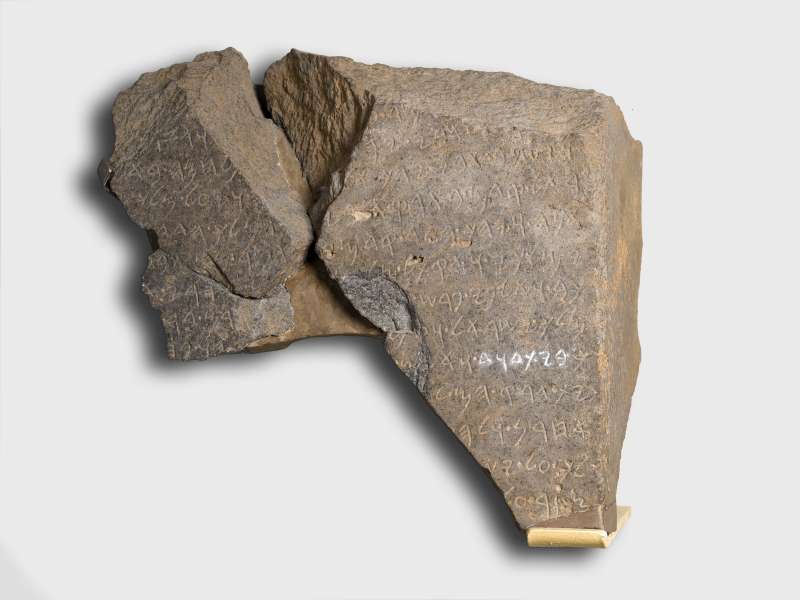 By the way, who are your illustrious leaders from Muslim Palestine 850 BCE who may have interacted with King David?

Then there is King Uzziah, who ruled in the 8th century BCE. He was famous for his building projects. When he died, he could not be buried in the royal tombs, because he was a leper. Some 700 years after his death, in the Second Temple period, Jerusalem expanded, and Uzziah’s tomb had to be moved outside the new city limits. This Aramaic epitaph was erected to mark the king’s new burial place. Aramaic, is closely related to Hebrew, and was written in a variety of alphabetic scripts. Aramaic remained a dominant language for Jewish worship, scholarship, and everyday life for centuries in both the land of Israel and in the diaspora, especially in Babylon.

“Hither were brought
The bones of Uzziah
King of Judah.

Hmmm no burial markers for Muslim Palestinians. Perhaps you could share one or two. Or at least, explain.

Royal inscriptions and seals are on display in galleries, bearing the names of Ahaziyahu, Uzziah, and Hezekiah – kings of Judah, and Jehoram, Jeroboam and Menahem – kings of Israel. These offer rare archaeological evidence to the existence of these kings, whose names are listed in the Bible.

But I see no mention of Muslim Palestinians. Why is that?

The Bassatine cemetery in Cairo dates back at least to the ninth century and is believed to be the world’s the second-oldest Jewish cemetery, after the Mount of Olives. A geniza was found there. A geninza is a repository for timeworn sacred manuscripts and ritual objects, generally located in the attic or cellar of a synagogue. Hmmm.  A Jewish cemetery in Egypt; with Jewish documents – but no mention of a Muslim Palestinian cemetery. Why is that? Where were the Muslim Palestinians buried?

And then there is Jordan. Run by the Muslim Hashemites. In 1922 Britain hived off most of the British Mandate for the Jewish Homeland in Palestine: please note a mandate, not a state; called it Jordan and gave it to the Hashemites. That means that Jordan is Palestine; or Palestine is Jordan? Right?

If I am wrong, please explain.

The UN divided what was left of the British mandate for the Jewish homeland in Palestine in 1948 but the Muslims said no and five Muslim countries attacked Israel. Israel lost more of her land; to the Jordanians. And Jordan, previously called the British Mandate for the Jewish homeland in Palestine, occupied Israeli land until 1967, when the Muslim world attacked again, and lost, again. In 1948 Muslims “voluntarily” left Israel as ordered by the Grand Mufti, and others were expelled due to the war. What about the Jews?   John Phillips’ photo-reportage shows the destruction of the Jewish Quarter of the Old City of Jerusalem in 1948 and the expulsion of Jews and the destruction of their communities—whenever and wherever military power relations were in favor of Arab forces. Where are those Jews, today?

And let us not forget the more than 850,000 Jews were thrown out of the Arab lands because of partition.  Where are they, today? Why are they not allowed to return to their homes and business 70 years later-with their children and grandchildren?

Why do Muslims live in refugee camps? The displaced people of WWII have long been resettled. Why did the Muslim countries not take in their brother and sisters?

You say there has been a Muslim Palestinian genocide. Really? Perhaps you can explain these  numbers. The Palestinian population was 1.37 million in 1948. The estimated world population of Palestinians, today totals 13.8 million. What was that about a genocide? Because there were 18 million Jews in 1938 and today, in 2022 there are 15 million. Hmmm. Is that not a genocide?

How do you explain the rise in Muslim Palestinians and the decline in Jews?

Let’s move on to the accusation of apartheid Israel.

So, show me the signs on the doorways of shops and restaurant and businesses and hospitals that say “Jews Only” or “No Muslim Palestinians?
I can show you signs from Canada in the 1950’s that said “NO Jews allowed; Gentiles only.”

How about signs on water fountains: “Jews Only.” Hmmm. There is a sign on the Temple Mount over a water fountain that says Muslims only.   Apartheid anyone?

And how about those gay rights in the PA? What? NO rights for gays in Muslim Palestine?

Any streets designated Jews only? No. Ahh but how do you explain the street signs that say No Jews allowed? Hmm: Apartheid anyone?

There are mosques all over Israel. Where are the synagogues in the Palestinian territories or Gaza? Oh wait – there are no Jews allowed. Why is that? Apartheid anyone?

Can someone please explain?

One last question: Other than becoming experts at terrorism, what else have Muslim Palestinians contributed to the world?

Dear Muslim Palestinians and your supporters, please explain your position on all of these questions. The Jews have been forced to explain our right to exist as Jews, and in a Jewish state forever!

I look forward to the discussion.