Philosopher Will Durant wrote ~ The trouble with most people is that they think with their hopes or fears or wishes rather than their minds.

I recently wrote a piece called I am a #JEWIHSISLAMOPHOBE where I talked about the rise of Jew hatred in Canada because of the rise in Islam in Canada. There are many pontificating pundits who keep telling us that Islam is a religion of peace and there is something wrong with Canadians who do not welcome Muslim values into our country. Globe and Mail columnist Margaret Wente comes to mind. I just read her article this morning: “Muslim hatred has no place in my Canada” right after I read about a Jewish boy in Germany…GERMANY!!!! who was tormented by Muslim students-for the crime of…being Jewish. Sound familiar? Ringing any bells?

Margaret wrote about her concerns regarding our welcoming of new people into Canada. She can’t understand the pushback against Islam. It’s just so un-Canadian. She is like so many do–gooders who want to believe that all people have our values and if they don’t, they will take them on once living amongst us. Despite the facts in front of her face.

She, like so many other Progressives-pundits, politicians and professors,  will not accept the fact that Islam is diametrically opposed to freedom for all, equality for all and far too many Muslims have no intention of changing. That’s why they demand the right to teach and preach Islam in our secular schools in the name of freedom of religion.

Let’s return to Germany. Look what tolerance has done to that country after decades of remorse and repentance for the military industrial massacre of 6 million Jews. Home again to Jew-haters.

This is the conversation that took place in modern Berlin at a multicultural public school:

You would think the authorities would be distraught. After the planned mass murder of Jews by their not so distant ancestors. You would think alarm bells would be going off across the nation.

But surprise –NO. “This is normal for adolescents from this background, that they’re just trying to find their identity.” Like the Deutsches Jungvolk (German Young People) and the Hitler Jugend (Hitler Youth) of Germany of old? 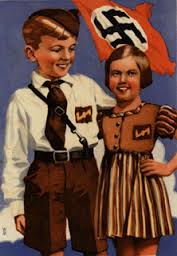 So what if “several incidents in which people wearing skullcaps or other outward signs of Jewishness have been beaten on the streets of Berlin.”

And this is going on while students in a school in Oswego County, New York were given an assignment this past February by  teacher, Michael DeNobilet as part of the Oswego County CiTi/BOCES New Vision program to “put themselves in a Nazi leaders’ shoes and argue for or against the ‘Final Solution’ to exterminate Jewish people.” A lesson in critical thinking.

I have an idea. Let’s ask the students to put themselves into the shoes of members of ISIS and ask them to be for or against burning people alive. That won’t happen. They’d be accused of Islamophobia

Well, you know, we have to give Muslims some slack. WE don’t want to be thought of as Islamophobic by pointing out that they are calling for the death of Jews like Hitler and his pals. That they teach their children to hate Jews from a very young age.That would make US xenophobic, fear-mongering racists! Heaven forbid that a Progressive pundit be put in that position!

No no no. WE need to be open to and tolerant of their views because that’s who we are. Except that is not the way of Islam. Islam is intolerant, xenophobic, misogynist, and  homophobic to its core. Much like Nazism.  We are seeing this play out in the West- hello Germany– where out of the desire to pat ourselves on the back for being so accommodating we are opening our institutions  to hateful teachings and hateful people.

Had Wente and her cohorts been around in the 1930’s they would have said-don’t worry. The calls to kill Jews? They don’t mean it. Right. 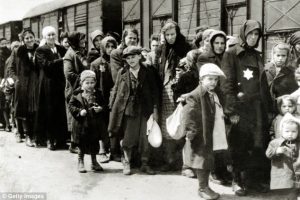 Just like too many Muslims in Canada and around the world don’t mean it, today.