Did the Muslim Rings of Peace Promote Peace and Love for all? 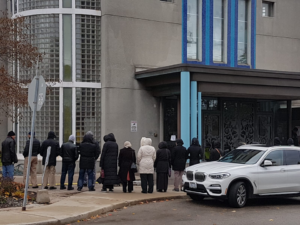 Numerous “Rings of Peace” were formed around Toronto synagogues on Friday night and Saturday morning (November 2-3, 2018), the week following the massacre of Jews in their synagogue in Pittsburgh. The events were organized by the National Council of Canadian Muslims in partnership with mosques across the city. 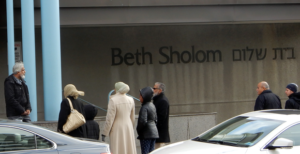 Group of multi-faith worshippers stood shoulder-to-shoulder and joined hands in solidarity. The events were organized by the National Council of Canadian Muslims in partnership with mosques across the city.

Farhad Khadim, one of the founding directors of the Islamic Institute of Toronto (IIT) and its current director of education, said that the gesture of solidarity extends beyond the protection of faith.

“It’s about the sanctity of life. For everyone on earth, whether you are part of a certain religion or do not practice religion at all, a right to safety is paramount.

“It could be a mosque or a synagogue or a nightclub. It doesn’t matter. Life is sacred.”

One of these rings of peace took place at Beth Sholom Synagogue-the synagogue that was the centre for my family when I was growing up and where I was married. The organizers for the Beth Sholom outreach event was the Islamic Institute of Toronto, Islamic Foundation of Toronto.

Here are some of the prominent Imams from the Islamic Institute of Toronto .

Musleh Khan, the Muslim chaplain for the Toronto Police department, also serves as an instructor at the Islamic Institute of Toronto.

In one of his online lectures, Khan explained that the first chapter of the Quran that is the mandatory prayer for Muslims 17 times in their 5 daily prayers, speaks also about the Jews and the Christians. Regarding the verse in question “The path of those you bestowed favors upon, not those who have incurred [Your] wrath and those who have deviated,” Khan said:

Shaykh Abdool Hamid is also an instructor at the Islamic Institute of Toronto. Abdool Hamid believes that Muslims should promote Islam and its values in Canada to bring about a change in the society for the betterment of Muslims and non-Muslims alike. In his prayer he asked Allah to support the mujahideen everywhere and to humiliate the polytheism [identified by Muslim scholars also as Christianity], the infidels and the atheists.

The following are excerpts from Abdool Hamid’s speech at Masjid Toronto mosque on October 30, 2013 (originally in English):

So we don’t need to rush into making changes, but that doesn’t mean [that] we shouldn’t start working toward the change even if it comes out an old day story. So we should not be satisfied with what we find. Initially we’ll be trying to do the best we can and what we find, but then we should start planning, so that we can move this forward, Allah Willing… what it is important, not to change overnight, but to have the plan and the intention to change and to start that process even if it is a slow one… So we take what we can do and we work with that, Allah Willing, slowly changes will come… What this ultimately will mean also, brothers and sisters, is that certain changes cannot happen unless we become involved in the political process… Be smart in showing others the message of Islam. So we need to engage even in that level if we really want to bring about the changes that we be not only for the betterment of the Muslims but Allah Willing for all of the society. There is nothing in Islam that is only good for Muslims and not good for the non-Muslims. Absolutely not. Whatever is good for the Muslims is also good for those who are not Muslims… Cause that what Allah wants for people. He wants the best in life and He [Allah] gives us this legislation [Islamic Law, Sharia] to allow us to achieve the best in life. So not only for the Muslims, but for the whole community in society as well. So we need to as Muslims to recognize this. We don’t have to submit to the situation as it is. Initially we might have to, but we should start thinking about how best we can bring about positive changes to our situation we face in our societies. That is what Islam is all about.

Abdullah Hakim Quick serves as an imam and instructor at the Islamic Institute of Toronto.

In a lecture entitled “The History of the Crusaders,” Mr. Quick advocated for the Al-Aqsa Mosque in Jerusalem to be liberated from the “filth” of the Jews:

In response to allegations against him for using the word “filth” Quick said: “I was asking God to heal the spiritual corruption that afflicts some members of religious groups which in turn leads to injustice against innocent people.”

In another lecture Quick said:

“It [homosexuality] goes with Zionism. And really it seems like, Allah knows best if they are Dajjal’s (Antichrist) army while it is mostly Jews but probably there will be homosexuals with them too.”

The “Rings of Peace” initiative conveys a message of solidarity and mutual support at a time of need. However, beneath the surface exists the seeds of conflict which are embedded in the Islamic faith. The Muslim mandatory prayer, as explained by an imam at the Islamic Institute of Toronto, reminds Muslims to distance themselves from the Jewish belief because the Jews earned the wrath of Allah. Another imam argued that the Jews (and non-Muslims) have spiritual filth and that Muslims are obligated to cleanse this filth in their lands. A third imam prayed to Allah to support Muslims who carry out the jihad everywhere and to give them victory over the disbelieving people, meaning also the Jews.

While the Islamic Institute of Toronto deserves to be commended for its initiative, the Rings of Peace will not achieve their goal unless the Canadian Muslim leadership addresses the sources of hatred in the Muslims’ scripture and the teachings against the Jews.