Elections must not only be ethical, they must be seen to be ethical as well 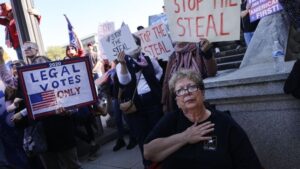 The 2020 election in America reminds us that elections must not only be ethical, they must be SEEN to be ethical.

There is an expression in Hebrew, marit ayin, “how it looks.”

The rabbinic principle of marit ayin (literally: “appearance to the eye”) holds that certain actions, though they should technically be permitted by Jewish law, are nevertheless forbidden because they appear to violate the law.

And that brings me to the election of 2020 in the United States; home of the brave, land of the free.

Was everything done during the election to ensure that it was ethical and also appear ethical to those who participated? Being told that all the rules have been followed does not stand up when there appears to be fraud: unethical behaviour.

I don’t know who won the election. It has not been officially declared, despite the fact that main stream media declared a winner. I do know that I watched until 3 AM when Donald Trump was winning only to wake up and hear he lost the leads in almost all the states.

What happened during the wee hours of the morning?

Shortly after it was clear that Trump had Florida and Ohio in the bag, things turned problematic. Vote counting was oddly halted in parts of Georgia, North Carolina, Nevada and the three “blue wall” states of Pennsylvania, Michigan and Wisconsin. Even more peculiarly, on consecutive nights, in states where Trump led on election night, large tranches of votes were mysteriously “found.”  In Milwaukee  seven voting wards reported more votes in the presidential election than they had registered voters on file.

There have been complaints of Republican scrutineers being prevented from seeing ballots, and the president  noted some unusually lopsided “dumps” of votes, including in Michigan and Wisconsin, states already presumed to have been won by Biden.

There were complaints about poll watchers forcibly kept outside the range of view needed to assure honest tabulating, and storefront windows boarded up to prevent the public from seeing what the vote counters were doing. States like Pennsylvania where a judge unilaterally allowed elections to proceed under rules that violate explicit state law. Incomprehensible vote dumps attributed to typos. Democrat officials saying they will allow ballot envelopes that arrive without postmark even after Election Day. Questions of illegal vote harvesting.

We have heard from postal workers and counters at polling stations that illegal actions were taken; dates on ballot envelopes back dated.

“Separate them from standard letter mail so they can hand stamp them with YESTERDAY'S DATE & put them through"#MailFraud pic.twitter.com/n7AcNwpq80

According to Donald J Trump Campaign Co-Chair Adam Laxalt, the Nevada Republican Party said it received thousands of complaints regarding the general election in Nevada. It also said thousands of ballots were processed “without meaningful observation” by Republican observers. “The fact remains that hundreds of thousands of ballots have been counted in Clark County and as a Judge and the Secretary of State have confirmed we have not been allowed to observe or challenge a single signature match for these votes. With the issues that have been reported regarding the election, we are now more than ever concerned with the lack of the transparency in observing and challenging possible invalid ballots.”

Does it look ethical when Dominion Voting Systems had “glitches” that affected the votes; switching Trump votes to Biden?

The Dominion Voting Systems caused the major GLITCH in Antrim County causing  thousands of Michigan ballots to swing to Biden, as Michigan Republican Party chairwoman Laura Cox noted. That same GLITCHY system is used in 47 other counties in Michigan!

How will citizens have faith in their electoral system when one has no idea how many “glitches” took place?

How does it look when that same Dominion Voting Systems — which commands more than a third of the voting-machine market has as its lobbyist a high-powered firm that includes a longtime aide to Speaker Nancy Pelosi. And there are connections with Diane Feinstein and the Clinton Foundation as well.

Prior to the election Hillary Clinton counseled Joe Biden not to concede under any circumstances. Fine. But does he not owe it to America to insist that the election not only be ethical but that it appears ethical to those who voted?