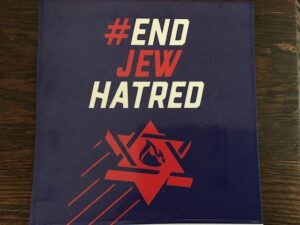 In Germany no streets or squares are named after Hans Langsdorff and there has been no official military representation at the annual ceremonies at his grave.

Seventy six years after the end of World War II and the revelation of the Holocaust; the deliberate extermination of 6 million Jews for the crime of being Jewish, a small town in Ontario is debating whether or not to keep a street named for Hans Langsdorff, the captain of the German ship, Graf Spee. Now, keep in mind, the town of Ajax took its name from the HMS Ajax and most of the streets in the Town are named for veterans of the Ajax. The HMS Ajax was one of three Allied vessels involved in the fight against the Graf Spee!

The street naming for Hans Langsdorff took place in a lovely ceremony in 2007. Why?  Apparently, Langsdorff was a “remarkable leader” a “true naval officer;”  a kind and gentle man, not a Nazi; after all, not all Germans were Nazis.  Now Langsdorff lauded Adolf Hitler as “a prophet, not a politician.” Less than a year before Langsdorff made that comment, the Nazi dictator had infamously prophesized that if another world war broke out, “the annihilation of the Jewish race in Europe” would inevitably follow. Jew hatred promoted by the Germans began long before the actual murder of the Jews in Europe.

Granted he scuttled his ship rather than follow Hitler’s orders to fight to the last man when facing impossible odds against a superior force. As a result, Langsdorff saved many lives and prevented the ship’s modern and secret technology from falling into the hands of the British. Three days later, he committed suicide (as did Hitler, Himmler, Goering and Goebbels), shooting himself in the head in a Buenos Aires hotel room.  In his suicide note he wrote:

“I shall face my fate with firm faith in the cause and the future of the nation and of my Führer.”

Let’s not forget he fought in the Führer’s navy, took an oath of allegiance to Hitler, flew under the Nazi Swastika flag, and was the enemy in WWII. 45,000 Canadians died in that war. Ajax is honouring a WWII enemy of Canada, of the allies, as a sign of reconciliation between Canada and Germany, according to some who spoke in favour of keeping the name.

Many of the sailors from the Spee had great affection for him. His grave, which commemorates him, is in Argentina’s National Cemetery in Buenos Aires.  If he was such a kind and gentle man, then name a street after him in Germany.  But wait, in Germany no streets or squares are named after him and there has been no official military representation at the annual ceremonies at his grave.

But I digress. Here it is 2021 and there is a discussion in Ajax regarding the street name. Not that this is the only time a road has been named for an enemy. In 2017 Ajax also named a street after the ship, Graf Spee in a new development just down the street to the town hall. The name was originally recommended by the Heritage Advisory Committee in 2017. In August 2020 the Council voted 6-1 to rename that street.

Maybe it was a lovely idea 13 years ago to memorialize this German Captain. There is a plaque on the street stating this is an honour bestowed upon Langsdorff.  This is relevant because some councillors said that it was not an honour but rather a part of history. But now Ajax is being asked to change the name.  Should it be changed? Max Eisen, a Holocaust survivor thinks so. So does Adam Wiseman, an Ajax resident.

November 16th, 2020 Ajax Council voted 4-3 to remove Langsdorff’s name from the street. Four to three? Three people, including the mayor are fighting to keep the name?  Mayor Shaun Collier, Ashmeed Khan and Joanne Dies have insisted this name must stay.  They insisted that Hans Langsdorff deserved this honour.

Despite the vote, it seems the battle is not over, yet.

Then said we should not “pander to this small group of people.” Who? The last remaining survivors of Hitler’s onslaught, an onslaught that was cheered by Muslims including the Grand Mufti of Jerusalem when he met with his friend Hitler? For those unaware of history, Nazi and Muslim ideology have much in common. During WWII the Arab Higher Committee broadcast nightly incendiary hate messages beginning with words “Oh Muslims,” and undertaking all things calculated to advance a German victory, which promised an Arab state in Palestine and a disappeared Jewish population. No wonder the Arab marketplaces were filled with placards that exhorted, “In Heaven, Allah is your ruler. On Earth, it is Adolf Hitler.”

Today, Louis Farrakhan, the leader of the Nation of Islam would be BFF with Hitler if he were alive. As Farrakhan said: “Hitler is a very great man.” “And don’t you forget, when it’s God who puts you in the ovens, it’s forever!”

It was Hitler who introduced the term Islamophobia.

But again, I digress.

Joanne Dies has taken an interesting approach. She made her decision based on what she learned from Black Lives Matter, an organization from which many members took part in the burning of American cities this past summer and is affiliated with BDS, a movement that calls for the elimination of the State of Israel. It seems Black Lives Matters has taught her that we do need streets named for Germans, even those who were loyal to Hitler, because they shouldn’t be discriminated against.

“I also personally don’t feel that all Germans were Nazis. Black Lives Matter has brought to the forefront this very issue that we cannot judge people by colour, race, gender or religion.”

That’s right. Don’t judge them by colour, race, gender or religion. How about judging them on CHARACTER?

These councillors want to see the name changed:

Seems Mayor Collier is in favour of keeping the name; one of the hardest decisions he has made in17 years. He said Langsdorff was an honourable man who deserved to be remembered. Collier  attended a gathering in Buenos Aires where the Germans and the Canadians reconciled. As he said, “There was no us versus them.”

Isn’t this special. A street named for a Nazi; well was he or wasn’t he? But he certainly represents the memories of Nazi Germany, gathers support from a Muslim with a problem with Israel and a woman who has learned from BLM all about diversity.

Yes, this is about diversity. It is about the diversity in Jew-hating. There is no doubt about it, when it comes to hating Jews, there is a great diversity amongst Canadians, from the left and the right, for all kinds of reasons, justifications and obfuscations. It is not as if Jew hatred began with nor ended with the Holocaust. It is alive and well in Germany and around the world.

So here is an idea:

#EndJewHatred by renaming this street.

Here is the video of the Ajax meeting.  This discussion begins at 1:09.