Exclusive:The practice of Halal slaughter in Canada shared in video 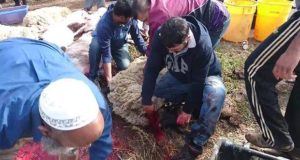 I recently published an article about the Muslim Halal Festival of the Sacrifice.  Here is a video of a group of Muslims participating in this special celebration.

This video, Qurbani in Canada, documents the Halal slaughter during Eid Al-Adha, Festival of Sacrifice, in September 2016. The video was posted by Jubaer Ahmed Prodhan on September 12, 2016. He  confirmed that the qurbani (sacrifice) ritual took place in Saskatoon, Saskatchewan in

“a farmer field where he sells qurbani animals and have place to make qurbani there.”

This Halal sacrifice took place on a sunny day in an open yard.

Five slaughtered sheep are lying motionless on the ground, soaked with their blood. Open to flies. Three men, wearing their everyday clothing; jeans and sweatshirts, are busy skinning and dismembering the sheep. Two other men are seen dragging a sheep to the slaughter. And yes, this live animal smells the blood and feels fear. So this animal is resisting participating in its death.

With the help of two other people the sheep is prepared for sacrifice. Two are holding tightly to its front and back legs. A third is pressing its body to the ground close to a fresh pool of blood while the fourth is wielding a knife above the sheep’s head. Both of his hands are heavily stained with blood. He pulls the neck of the sheep to the side creating an arch that exposes its throat. His knee is pressing  hard against the sheep’s head to hold it to the ground, not allowing any movement. Then he starts cutting its throat in a back and forth motion. (Note the small size of the knife being used to cut the throat of this animal).  According to Halal

“the slaughtering must be done in one stroke without lifting the knife. The knife should not be placed and lifted when slaughtering the animal.”

This video and many similar videos of the Halal Festival of the Sacrifice from around the world show that the “one stroke without lifting the knife” may mean a constant sawing motion.

The man performing the Halal slaughter stands up and his companion takes over pressing the head of the sheep to the ground while its blood is gushing out of the body creating another red pool of blood. In the background you can see that the sheep that was recently sacrificed is still moving its legs. There do not appear to be any sanitization stations. No fresh water, no soap. All the while people are milling around the slaughter and the slaughterers.

Two grey dogs approach the containers which contain the butchered organs of the sheep.

Approximately 40 people took part in that Halal ritual of sacrifice, including a Muslim religious leader. Note the smiles on the faces of the participants.  The children appear excited and happy and are laughing as another sheep is being forcefully led to the slaughter.

Four open containers with chopped cuts of the sheep are just outside the shack. A bird is seen on one of those bins containing the carcasses ready to be cut into small pieces by a man who uses an industrial electric sawing machine.  And we see people coming to receive their share of Qurbani, the Halal meat of the Halal slaughtered sheep, used to prepare the traditional meal of the Festival of Sacrifice.

I leave you with two comments from the video: Qurbani in Canada.

“Poor animals. What is their fault. They did not kill anybody. God is brutal.”

Jubaer Ahmed Prodhan, the YouTube user responded “God is brutal? You mean to say you’ve much more concern for the creation than the Creator himself?!!!”