You recently posted something that violates Facebook policies, so you’re temporarily blocked from using this feature. For more information, visit the Help Center.

To keep from getting blocked again, please make sure you’ve read and understand Facebook’s Community Standards.

The block will be active for 2 days and 16 hours more.

If you think you’re seeing this by mistake, please let us know.

I tried to find out why I was blocked. I sent a request-because I thought it was a mistake. I don’t use foul language. I don’t post pornographic photos or death threats. I don’t attack people- I do attack their facts.

I received the usual response-Nothing.

I was “deleted” either because of my latest post  Islam on the March:Part 1  or I may have insulted some Liberals (sadly so easy to do). I was commenting on a post about Donald Trump-how dare he spend so much money on the Secret Service-on three homes! Someone suggested that Melania should do her Christian wifely duties and be with her husband at the White House. I fell over on that one. Yes I commented-I believe I questioned the century.

There was also an implication that the Trumps were having marital problems-but the White House was big enough for both of them. And then there was the comment that Barron should have been taken out of school and moved to Washington. I recall mentioning that the Obama’s stayed in Washington for their daughter. I mentioned to one person on that thread that I found his comments disdainful of the President. He got angry with that and told me –disdainful? No! he was disgusted and gave me all the reasons and would not accept Trump, ever. Hmm.

Now I am shut down on Facebook on a regular basis; from posting my articles on other sites or sometimes denied the opportunity to comment on different posts-I can never understand how they decide to which posts I can and cannot reply, but this is the first total block.

I am also unwelcome at the National Post and the Globe and Mail. I have a nasty habit of sending emails to the Globe and Mail public editor and to the “journalists” when they commit ethical errors of sins of omission and sins of commission. I have previously written about some of the comments I have received from these “journalists.” Interesting is a word.  I believe I offend them with facts and demands that they provide news-not narration.

But it is Facebook that has become dangerous. We have given our right and responsibility of free speech over to an organization that has shown itself to be anti-semitic and so progressive  that the Left is forever forgiven but the Right is constantly under attack.

“Facebook does not permit hate speech, but distinguishes between serious and humorous speech. While we encourage you to challenge ideas, institutions, events, and practices, we do not permit individuals or groups to attack others based on their race, ethnicity, national origin, religion, sex, gender, sexual orientation, disability or medical condition.”

Really? Facebook apologizes for removing the page of Palestinian president Mahmoud Abbas’s party Fatah, while anti-semitic memes thrive, we know we have a problem.

But this is acceptable according to Facebook community standards. 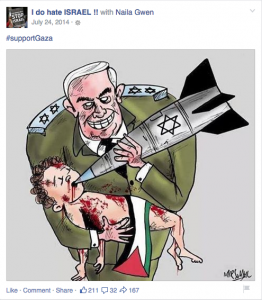 This is 1984-and I hate saying that too. It’s an overused reference-but so right.

Sadly this is the lesson I am learning. If I want to have my Passionate Voice of Reason heard on Facebook I have to self-edit. I can no longer comment on liberal sites or react to their factless, tactless comments for fear of being shut down.

And this is the danger all of us who respond to the Left face, today. That one organization, clearly Liberal in its views, is more or less in charge of free speech; and even more seriously, with the power of the “delete” button pushes a particular narrative.