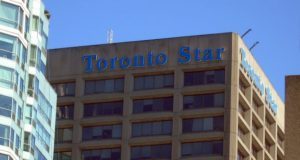 Why am I writing so many articles about #FakeNews at the Toronto Star and focusing on one article? Because  the complaints sent to the publisher, public editor, and reporter about facts and the gross omission of facts were ignored. And this, for me, is at the heart of unethical journalism-the omission of facts; especially after those facts were provided.

“Ayman Elkasrawy’s posts on social media may help you a great deal in your research.”

I contacted John Boytnon,Publisher, Bob Hepburn, Media Inquiries, Kathy English, public editor and Jennifer Yang, reporter many, many, many times. No answer. No explanation. Nothing.

On October 22, 2017, the Toronto Star dedicated four pages, including its front page, in an attempt to exonerate Ayman Elkasrawy, an imam at “Masjid Toronto” mosque, from anti-Jewish and anti-infidel prayers during Ramadan 2016. It is filled with errors in fact and the gross omission of facts.

Jennifer Yang wrote in her article:  “Elkasrawy says he agreed to speak with the Star because “I have nothing to hide.” She  emphasized that the “context is key in determining the appropriate translation.”

Yang added: “Elkasrawy says he agreed to speak with the Star because “I have nothing to hide.”

I am enclosing some of Ayman Elkasrawy’s social media posts that directly or indirectly mention or deal with the Jews, Israel, Zionists and the Zionist lobby. You decide.

Does he have something to hide?

On April 2, 2013 Ayman Elkasrawy used the word the “Jew” in an allegedly derogatory context. In this tweet Elkasrawy mocked Egyptian television host Dr. Bassem Youssef by saying, among other things, that “the Jew is defending him.” Elkasrawy did not elaborate the identity of “the Jew”, but from the context it may refer to Israel or to Abdul Fattah Sissi, then the Chief Commander of the Egyptian Armed Forces and Minister of Defense. Within Egyptian Islamist circles Sissi is called in a derogatory context “the son of the Jewish woman”. 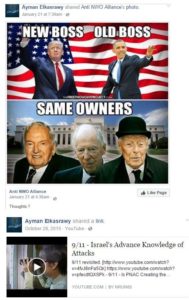 October 28, 2015 – Ayman Elkasrawy shared a link to a YouTube video entitled “9/11 – Israel’s Advance Knowledge of Attacks”. Elkasrawy “Liked” this video on his YouTube channel. This conspiracy theory video was later removed by YouTube. It is available here.

November 10, 2016 – Ayman Elkasrawy shared a video dealing with the US presidential elections. He added the following comment (originally in Arabic): “An important and useful episode… shows the lie of the American democracy (in terms of electing candidates by the people)… and shows the staggering amount of loopholes that explain how the Zionist lobby can control the presidency of America and who comes to it [becomes a President]!!!”

April 17, 2012 – Ayman Elkasrawy ‏tweeted (originally in Arabic): “The election committee announces the names of candidates chosen by the United States and Israel. Farouk Sultan will announce the victory of Amr Moussa over them and will become the President of Egypt !!!”

February 11, 2016 – Ayman Elkasrawy shared ‎كلنا خالد سعيد – نسخة كل المصريين‎’s photo adding the following comment (originally in Arabic): “We have said it a long time ago that the [United Arab] Emirates are the Zionists of the Arabs!!!!”

On May 27, 2015 Ayman Elkasrawy retweeted the following message byمحمد منتصر ‏@montaseregy (originally in Arabic): “This is our religion and these are our scholars. Egypt is calling, we will not go back. Being loyal to the Zionist aggressors,supporting and protecting them and being hostile to the Palestinian resistance/ struggle/ fight [muqawamah] and conspiring against it, and imposing a siege on it by destroying Sinai [Peninsula] and displacing its people, is a betrayal of the religion [Islam] and the homeland [Egypt].”

September 28, 2016 – Ayman Elkasrawy shared a YouTube video featuring Turkey’s President Erdogan confronting Israel’s President Shimon Peres at the World Economic Forum in Davos and added the following comment (originally in Arabic): “This is the only beautiful memory from the life of the deceased butcher [Shimon] Peres.”

According to Al Jazeera Center for Studies, Shaykh Nash’at Ahmad is affiliated with the Egyptian Salafi movement which was subjected to security restrictions and even arrest and trial in various cases related to fatwas, or Islamic edicts, urging the support of Mujahideen (Muslims who engage in jihad) in Palestine and justifying the 9/11 attacks. Shaykh Nash’at Ahmad is also known for his anti-Jewish sermons:

So I asked the Star “Why didn’t the Toronto Star publish Ayman Elkasrawy’s social media posts and “Likes” on Facebook, Twitter and YouTube that directly or indirectly mention or deal with the Jews, Israel, Zionists and the Zionist lobby?

You stated: “I have nothing to hide”. Why did you change on August 6, 2018 the status of your tweets into “protected” which means that only your 40 (forty) followers can have access to read them?

Why did you remove on August 6, 2018 all Likes from your YouTube Channel?

And in return I received from all: