I watched the 60 Minutes presentation about the National Memorial for Peace and Justice in Montgomery, Alabama. It is the nation’s first memorial dedicated to the legacy of enslaved black people, “people terrorized by lynching, African Americans humiliated by racial segregation and Jim Crow, and people of colour burdened with contemporary presumptions of guilt and police violence.”  This building in the centre of the site is constructed of over 805 corten steel monuments, one for each county in the United States where a racial terror lynching took place. The steel markers are inscribed with more than 4300 names of people lynched between 1877 and 1950 for the crime of being black. Each marker has the name of the state, county and the names of lynching victims from the area.

Think of the symbolism of these hanging markers. They are there to teach us that  “racial terror lynchings in the American South were acts of violence at the core of a systematic campaign of terror perpetuated in furtherance of an unjust social order. These lynchings were terrorism.” 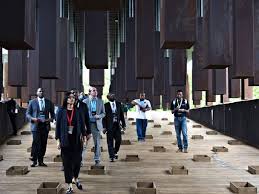 The brilliant people who put this together also collected jars filled with soil from the sites of lynchings. This, too, is remarkable because the more senses involved in learning something the stronger the impression and the longer one will remember. 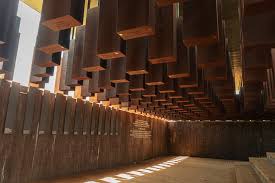 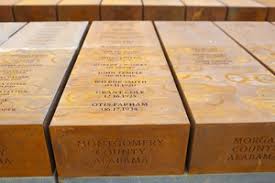 The Memorial contains stories of those who were lynched.

There is a newspaper account of the lynching of Jesse Washington, a black man, accused of a crime in Waco, Texas.

The newspaper described a crowd of 15,000, many “dressed in their Sunday best,” and said Washington’s clothing was soaked in oil, then he was tied to a tree and lowered into a fire.

Wes Johnson was an 18-year-old accused of assaulting a white woman. A mob took him from his cell before his trial, then shot him and hanged from a tree.

There are photos in the Memorial of children smiling. This was a “fun” event. A circus. Adults were teaching young people that it is fine and dandy to lynch black people. To treat them as “lesser than.” Much of this education was done in the churches themselves: Pastors teaching that black people are not really as human as white people and finding passages in the Bible to support that belief.

On Jan. 4, 1861, a Catholic bishop named Rev. A. Verot ascended a pulpit in The Church of St. Augustine, Florida, and defended the right of white people to own slaves.

The apostle Paul, Verot claimed in his sermon, instructs slaves to obey their masters as a “necessary means of salvation.” Quoting Colossians 3:22, he said, “Servants, obey in all things your masters according to the flesh, not serving to the eye, as pleasing men, but in simplicity of heart, fearing God.”

It’s no secret that hundreds of Christian pastors like Verot used the Bible during the Civil War to justify slavery. Harry Stout, Jonathan Edwards Professor of American Religious History at Yale University wrote that “White Christians in the South didn’t just support slavery — the Southern church was the backbone of the Confederacy and its attempts to keep African Americans in bondage.”

This is how hate is best taught and normalized. From the pulpit.

Undoing hate is no simple matter. We are witnessing the hard work of so many to undo the dehumanizing of people based on colour. This hate was only taught for 400 years. I know that sounds crass but I want you to see the damage done in 400 years of teaching and preaching hate for another by dehumanizing them. How difficult it is to undo those teachings. And many white people raised by black nannies ended up looking down on black people.

Yet, while still dealing with the after effects of that horror, we are allowing hate in another form to be shared in the name of religious freedom and tolerance and diversity  and inclusion. We are allowing prayers to be said in our countries that dehumanize Christians and Jews and all other people who do not accept Allah as their God. The prayers and supplications said across the West by Imams are as dangerous as the prayers and teachings of pastors in America when they taught that black people were less than human. These prayers and supplications have been shared for 1400 years.

Here are just a few, a few, of the teaching from the pulpits.

Muslims who pray 5 times a day, repeat at least 17 times the verse:

Muslim scholars explain that those who “deviated” from Allah are the Jews and Christians. But especially the Jews, who angered Allah, who cursed them and “turned them into monkeys and pigs,” according to Osman Haji, Imam of the Sahaba Masjid mosque in Edmonton, Alberta.

What about these prayers?

“You are our Protector and give us victory over the disbelieving people. [congregation:] Ameen [declaration of affirmation]…

O Allah! Give victory to Islam and raise the standing of the Muslims. [congregation:] Ameen.

And humiliate the polytheism and polytheists. [congregation:] Ameen.

Here are some examples from the prayers recited at Masjid Toronto:

In a second prayer

Here are some excerpts from the “Final Dua” [supplication] that was delivered by Ahmad Ali on April 1, 2018 at the Islamic Society of Toronto, Masjid Dar Us Salaam

O Allah! Count their number, slay [kill] them one by one and make them a lesson to their likenesses…O Allah! Raise the standing of Islam and the Muslims

And humiliate the oppression and the unjust people

And destroy Your enemies, the enemies of the religion [of Islam]

Oh Allah, Defeat them and make the ground shake beneath their feet, and show us in them the wonders of Your Might, for they are weak before You, O Mighty, O Powerful.
O Allah! Raise the standing of Islam and the Muslims.

Here are more examples of teachings at this mosque from 2016 and 2017.

The Muslims are  warned against taking the Jews and Christians as friends.

Allah makes it clear that the belief in the ‘Trinity’ constitutes kufr [heresy] and that enmity and hatred have been entrenched into the hearts of the kuffaar [disbelievers/ infidels] till Qiyaamah [Day of Resurrection]. Allah entreats Rasululllaah [messenger of Allah] (sallAllaahu-alayhi-wa-sallam) [peace be upon him] not to be grieved about the disbelief of the kuffaar [disbelievers/ infidels] because he is not responsible for them.

Surah Maa’idah [The fifth chapter of the Quran “The Table Spread”] also states that Jannah [paradise] is forbidden for the Mushrikeen [polytheists] and that oppressors will have none to aid them against Allah. Allah says that those people of the past who adhered to the divine religions of their times will attain salvation if they firmly believed in Allah and in the Day of Qiyaamah [Day of Resurrection].

Allah’s Deen [religion of Islam] will always conquer and rise, while the kuffaar [disbelievers/ infidels] will suffer a terrible doom for their falsehood.”

When the Prophet Isa [Jesus] (Peace be upon him) returns to this world he will be a Prophet and implement the law of the Prophet Muhammad (peace and blessings be upon him).

The Prophet Isa [Jesus] will judge and live according to the shariah of Muhammad(peace and blessings be upon him).

Allaah also commands the Mu’mineen [Muslim believers] to wage jihaad; impresses on their minds that martyrdom is an exalted position and states that fear for death is an act of cowardice for a Muslim…

From Muhammed, himself, shared down through the ages to Mosques, today.

“The last hour would not come unless the Muslims will fight against the Jews and the Muslims would kill them until the Jews would hide themselves behind a stone or a tree and a stone or a tree would say: ‘Muslim, or the servant of Allah, there is a Jew behind me; come and kill him;’ but the tree Gharqad would not say, for it is the tree of the Jews.”

Today, Sheikh Muhammad Bin Musa Aal Nasr in Montreal, Canada shares the words of Muhammed, and then some.

“What is the disease of the Jews? It is that they believed in only part of the Scripture, while rejecting another part. As Allah said, disparaging them: ‘Do you believe in part of the Scripture and reject another part? And what is the reward of those among you who do so, except disgrace in this world?’ Allah ordained disgrace for them in this world: ‘On the Day of Resurrection they will be consigned to the most severe torment. Allah is not ignorant of what you do.’ And what is said about the Jews is also said about all those who imitate the Jews.”

“If you worship Allah, you can rest assured that Allah will fulfill His promise and will support you. On Judgment Day, when the Muslims defeat the most vicious of creatures – the human demons – the stones and the trees will say: ‘Oh Muslim, oh servant of Allah, there is a Jew hiding behind me, come and kill him!’ – except for the Gharqad tree, for it is the tree of the Jews.”

“My brothers, the Prophet Muhammad brought the good tidings, when he said: ‘Judgment day will not come until the Muslims fight the Jews. The Muslims will kill the Jews, and the Jews will hide behind the stones and the trees, and the stones and the trees will say: Oh Muslim, oh servant of Allah, there is a Jew hiding behind me, come and kill him, except for the Gharqad tree, which is one of their trees. This is the promise of Allah.

Abdullah Khadra, a Syrian-American imam, announced during a sermon in a Raleigh, North Carolina-area mosque that Jews should be killed.

“The Prophet Muhammad gave us the glad tidings that…we will fight those Jews until the rocks and the trees will speak: Oh Muslim, this is a Jew behind me,” Khadra said. MEMRI suggests that the words have a known connotation that Khadra did not say, but his listeners understood. “The continuation of the well-known Hadith is that the rocks and the trees say: ‘Come and kill him.”

Tell me again why this is acceptable? Have we not learned from the past that preachers promoting hate for the other are highly successful? That congregants give a great deal of value to the teachings of their religious leaders?

Do we not have the right if not the obligation to stop the teaching of hate from the pulpit?