Globalism and the rise of antisemitism

Antisemitism had been quiet for decades after the Shoah, Holocaust. All that sturm and drang, all that hand wringing and chest beating, what have we done to the Jews! Never again! they screamed.

And it happened again. Not from the right. We’ve been pretty good at calling them out for their hate. No fear on that. But from the left. Islam has been allowed to spread their Jew hatred everywhere in their mosques around the world. And once that spigot was opened…

Miracle of miracles, the left and right have finally found common ground.

The Serpent is back.

“There is also a convergence, or intersectionality, of hatreds, invariably targeting Jews. This can be summed up as “Any hater of the Jews is my friend – at least for now.” Thus, former KKK grand wizard David Duke is now defending Congresswoman Ilhan Omar.

Globalism, not nationalism, is the greatest threat to Jews and Israel since the Nazis.  Calls for open borders after Barack Obama failed to stop ISIS. Calling it the JV team and refusing to respond to Syria’s gas attack on its own people. Millions of Muslim refugees flooded the West bringing with them their cherished values, beliefs, moral and ethics, just as Westerners cherish and travel with theirs. Despite the call of Franz Boas that all cultures are equal, they are not equal; they are different. And Islam is diametrically opposed to every value held dear by the West. Don’t take my word.

ICNA Canada  shares with its members, followers and supporters, the book Riyad us Saliheen” where it says:

The hate is so severe that the special UN rapporteur recognized that the sources of anti-Semitism are varied and pointed out what he thinks are the three main strains:

They are: “growing use of anti-Semitic tropes by white supremacists including neo-Nazis and members of radical Islamist groups”; an increase in “anti-Semitic narratives or tropes in the course of expressing anger at policies or practices of the government of Israel”; and the objectives, activities and effects of the Boycott Divestment Sanctions (BDS) movement.”

“Decades after the Holocaust, shocking and mounting levels of antisemitism continue to plague the EU, Jewish people have a right to live freely, without hate and without fear for their safety.”

Middle East Media Research Institute (MEMRI) director Yigal Carmon warned that violent acts of Jew-hatred perpetrated by Muslims in the U.S. could reach a Western European scale, “If there isn’t an awakening, and resistance against this.” He also condemned the feckless inaction of a Jewish community unwilling to identify, and combat, the Islamic religious origins of this Jew-hatred, because it is paralyzed by fears of being labeled “Islamophobic.”

Islamophobia is a highly successful global conspiracy to silence criticism of Islam.

“There has been mass immigration to the West from countries that have institutionalised anti-Semitism and teach hatred for Jews even in their school curricula. So those who have grown up on a diet of hate and conspiracy theories bring this ideology with them. We are witnessing this from elected representatives south of the border in America.”

Why would millions of people choose to come to the West rather than migrate to countries right next door with similar values and laws? I know that if, heaven forbid, I had to flea Canada, I would not pick Saudi Arabia for refuge. Why did millions of Muslims not move to one of the 23 Muslim only countries in the Middle East and North Africa? To what end? 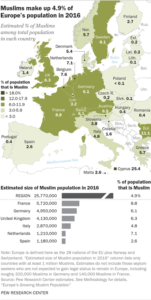 There is one fact that is crystal clear, these refugees from Muslim countries packed their innate, endemic, systemic Jew hatred in their luggage and unpacked it on our shores. How do I know? ZOA.

During more than 15 years that  the Zionist Organization of America ZOA has been combating campus antisemitism, ZOA has never received a single complaint about antisemitic discrimination, harassment or intimidation perpetrated by neo-Nazis or white supremacists. By contrast, ZOA’s Center for Law and Justice and campus professionals receive hundreds of calls from students about antisemitic harassment, discrimination and intimidation perpetrated by the hate group “Students for Justice in Palestine” (SJP) –which reportedly has approximately 200 chapters on campuses across the country – and SJP’s allies. It’s always about the Muslims and left attacking, verbally abusing, and threatening Jewish and pro-Israel students.

According to a recent EU survey carried out in 12 European Union member states, and the largest ever of its kind worldwide, nearly 90 percent of European Jews feel that antisemitism has increased in their home countries over the past five years, and almost 30% say they have been harassed at least once in the past year.

Of the more than 16,000 Jews who participated in the online survey, 85% rated antisemitism the biggest social or political problem in the country where they live. Thirty-eight percent said they had considered emigrating because they did not feel safe as Jews.

The most common antisemitic statements Jews come across regularly, according to the survey, are comparisons between Israelis and the Nazis with regard to the Palestinians. Suggestions that Jews have too much power and “exploit Holocaust victimhood for their own purposes” also ranked highly. Such abuse was most commonly experienced online, in the media and at political events

The NY Times has reported that the rise in antisemitism in Germany comes from the right. Hmmm. Yet, Germany’s top intelligence agency has released a comprehensive report on the threat of rising antisemitism among radical Muslim immigrant communities.

The 40-page report, titled “Antisemitism in Islamism,” identifies Muslim immigrant communities as a possible source of significant antisemitic violence against Jews in Germany. According to the Pew Research Center the number of Muslims living in Germany between 2010 and 2016 went from 3.3 million to 5 million, or 6 percent of the population.

Now, in the home of the Holocaust, thirty-five percent of Berliners view Israelis as analogous to Nazis. An Al-Quds Day march takes place annually that calls for the destruction of Israel. A report published by Berlin’s Research and Information Center on Antisemitism (RIAS) recorded 1,083 antisemitic incidents in 2018 compared to 951 during 2017. This is but a fraction of the total, as many incidents go unreported. These include attacks on Rabbis by Arabic speaking people and Gideon Joffe, chairman of Berlin’s Jewish community, said one-third of the pupils at the Berlin Jewish High School had suffered harassment at non-Jewish public schools. “In the year 2019 our high school is full of Jewish refugees,” he said. The alleged perpetrators are often the children of Muslim immigrants.

German officials ought to be embarrassed and horrified that this is happening again. Yet Merkel stands with Iran.

In 2018, a study by the Institute for Jewish Policy Research and the Community Security Trust revealed that anti-Jewish and anti-Israel attitudes were two to four times higher among Muslims than the population in general.

“I’m extremely worried — as much for French Jews as I’m worried for the future of France. The anti-Semitism we’re now experiencing in France is the worst I’ve ever seen in my lifetime, and I’m convinced it’s going to get worse.”  France is doomed if it stays on its current path. The main culprit, he says, is an immigration policy which has contributed to a decline in public education and a large, poorly-integrated Muslim immigrant population that represents a threat to French culture and society.

Ayaan Hirsi Ali upon receipt of the American Jewish Committee’s 2006 “Moral Courage Award,” was unabashed in identifying Islam as the overriding source of pervasive Muslim Jew-hatred:

“When my half-sister told me The Holocaust was the best thing that had happened to Jews, I refrained from arguing with her because I did not wish to risk breaking the family ties. When she showed me holy [Koranic] verses to support her hatred of Jews I feared arguing with Allah for Allah would burn me…I am ashamed of my prejudices against you in the past…The tragedy is however that those [Muslims] unlearning to hate are far fewer in number than those who still do. As we sit here thousands, perhaps millions are learning to blame you and wishing to destroy you.”

Here are some links to attacks on Jews, worldwide.