Hey Jew: What’s that? That? That’s my emotional support bat!

A time to kill, a time to heal
A time for war, a time for peace
Ecclesiastes 3:3 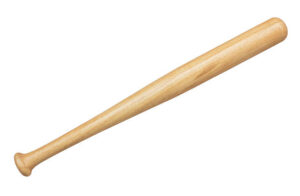 Dear Jews
We have a great history of defending ourselves yet, today we sit back and allow the bullying to take place over and over and over. Why?

Here is the latest attack on our young people.

There is a very large youth hockey association in Toronto, Canada. There are Jews on these teams.  It seems there have been three incidents involving one particular team spouting Jew hatred. Well, the parents of the players. It seems the latest slur thrown at a player was: “You F***ing Jew.” Quite the Jew-hating slur shared at a hockey game for 13 year old’s. So, a complaint was lodged and the organization is busy looking into it. Oh, looking into it.

Ever notice how often Jewish people lodge complaints to various organizations? We always send letters, share objections and concerns. We do the same thing over and over expecting a different result. What was that our “peep” Einstein said?

“Do the same thing over and over and expecting a different result is the definition of insanity.”

How many times do we have to say this? Stop being bullied. Enough already with the letters of complaint. No one cares. Little changes. And the cycle repeats.

For some reason there are multitudes of people who think they can call us names and attack us and we will turn the other cheek. Wrong religion. Jews do not turn the other cheek. Enough with being bullied. A little resilience please. We have a glorious history of fighting back. We are small but mighty. We are the descendants of some of the greatest warriors. King David’s soldiers and David as a young man took down a giant-with a sling shot. We have the Maccabees, Bar Kokhba. How about Deborah and Yehudith? How about the heroes of 1948, 1967, 1973? How about Kahane and the JDL?

According to Torah, we are called to defend ourselves. Let’s follow the law in the Torah (codified in Talmud Tractate Sanhedrin 72a, derived from Deuteronomy 22:26): Habah l’hargecha hashkem l’hargo — “If someone is coming to kill you, rise against him and kill him first.” (This law applies equally to someone coming to kill someone else — you’re obligated to kill the murderer in order to save his intended victim.) Someone who is prepared to destroy life in order to achieve his aim is no longer a life, but an anti-life.

To kill an anti-life is not a life-destroying act, it is a life-preserving act.

We aren’t going to go and kill these people, but at the very least should we not be prepared to defend ourselves against these anti-life Jew haters? Personally, I fancy carrying an emotional support bat with the slogan “I am that F***ing Jew.” What about you? Or how about kippot with those words? Or a necklace, or arm band. Just a reminder to those who think we are weak… we are not.

And look: we have a history of defending ourselves: with bats!

In Britain in the early ’60s, members of the fascist National Socialist Movement held rallies in London, waving swastikas and demanding leaders “free Britain from Jewish control.”  Because the Jews, of course, were the cause of all the economic pain. Hmm. Where had we heard that before?

In Ridley, members of the Jewish community, memories of Germany still strong, established the 62 Committee, which became famous as the 62 Group. These Jews were inspired by the anti-fascist resistance of Cable Street in the 30s  and the 43 Group in the 40s.

And bats! That must have been a shock!

As often is the case, the use of violence was not accepted by everyone in the Jewish community. The Board of Deputies – the community of Jewish leaders – particularly frowned upon their violent activities, taking a “they go low, we go high” position. Right, because that works. But the 62 Group’s tenacity paid off. The National Socialist Movement ran out of steam and fractured.

Now, this use of bats by Jews was not new. They were used by Jews in Canada.

Antisemitism was rampant in Canada in the thirties, ok the forties, alright the fifties. As anti-immigrant sentiment intensified, some residents requested separate leisure spaces for “Gentiles only.” Jewish Canadians were relegated to second-class citizenship. Businesses refused to hire them, universities restricted their enrolment, and entire neighbourhoods prohibited the sale or rental of housing to Jews. With the advent of the depression, the Jews, as usual, were blamed for the hard times.

With Adolf Hitler’s rise to power in 1933 the Nazis’ violent and racist policies against the Jews appeared across Canadian newspapers’ front pages. The symbol of the swastika and what it stood for quickly became common knowledge. Swastika Clubs formed to keep the beaches clean of “obnoxious visitors.”  Soon the hate spread to the baseball diamond and the game at Christie Pits.

In 1933 the Jews took their bats to Christie Pits despite the fact there were those leaders who said not to fight back(the familiar refrain).

On August 14, 1933, the mostly Jewish Harbord Playground baseball team took the field at Christie Pits against local rivals St. Peter’s. Jew haters also took to the field waving a swastika banner. That evening, they returned to paint the swastika alongside the words “Hail Hitler” on the roof of the clubhouse. They then informed the Toronto Daily Star that they wanted “to get the Jews out of the park.”

Two days later, on August 16, supporters of both factions arrived in force for the series’ follow-up game. Fights erupted in the stands and were broken up by police. As the game ended, members of a local anti-Semitic group flew a homemade swastika banner to cries of “Heil Hitler.” Violence broke out. Improvised weapons, baseball bats and lead pipes were used. The Toronto Daily Star reported that the fight drew in over 10,000 people.

But the Jews did not bend the knee. They refused to be bullied. What happened?

Take a look at the rise in Jew hatred this past year. We are in the 21st century!

The annual audit by Jewish advocacy group B’nai Brith found there were 2,799 anti-Jewish hate crimes, including beatings, vandalism of synagogues and swastikas in schools.

Reports of anti-Semitic incidents reached a record high in the UK last year, according to figures from a Jewish security charity. The Community Security Trust (CST) provides security for Britain’s Jewish community, and monitors anti-Semitism. The charity says it recorded reports of 2,255 anti-Jewish hate incidents in 2021, up 34% from 2020.

Antisemitic incidents reached an all-time high in the United States in 2021, the Anti-Defamation League said in its annual assessment .There were 2,717 incidents last year, representing an increase of 34% over 2020 and the highest on record since the New York-based Jewish civil rights group started tracking such cases in 1979.

It seems what we are doing is not working.

I leave you with this wee video.

As you watch remember:

Actions, like an emotional support bat, speak louder than words