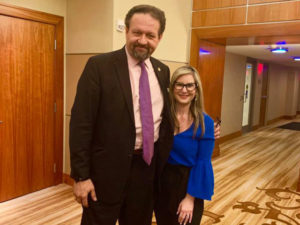 I have not met Aviva Polonsky nor Sebastian Gorka nor the people at Chat.

Aviva Polonsky, a teacher at TanenbaumCHAT and the President of the Federation of Teachers in Hebrew Schools in Toronto, accompanied 14 students to the AIPAC conference. On March 23, she posted photos of herself and some TanenbaumCHAT students posing with Sebastian Gorka and posted this on her  social media account:

Well, didn’t that just fire up a storm on social media. The usual suspects out there calling for her dismissal. How dare she pose with Gorka? Isn’t he an anti-semite, a Nazi sympathizer?

And the administration, Dr. Jonathan Levy, Head of School, without batting an eye, gave in to the bullies. Because that is what they are. And here is a school administrator kow-towing to bullies on social media when schools are supposed to be developing and teaching anti-bully protocols against students. What did the students at Tanenbaum CHAT learn? They learned that bullying works.

It seems that  the school was fully aware of the students’ itinerary, including the session with Gorka. All was fine until the photo.  And, then after the social media attacks, Jonathan Levy, TanenbaumCHAT’s head of school, declined to comment on whether the administration knew that the students would be attending Gorka’s talk, although he had previously told The CJN that, “If we knew ahead of time of the very serious concerns, we would certainly have questioned whether it would be appropriate for our kids to go.”

On March 26, a group of alumni published an open letter addressed to Levy, expressing their concern and disappointment at the school allowing its students to meet with Gorka and calling for the school to launch an investigation.

That was enough for this shtetl Jew (do I need the word alleged in here?), Levy to duck and hide when the controversy arrived. What a lesson for the students. He is teaching them to be weak and afraid of controversy. Afraid to stand up with those who defend Israel.

Jewish students are supposed to be taught the importance of asking questions. That is basic Talmud. Critical thinking is the outcome of such questioning. Did the administration question any of the allegations made by the social media bullies?

Did Dr. Levy speak to the teacher?  Did he know that Ms. Polonsky said that

“…in his remarks, Mr. Gorka was supportive of Israel and he encouraged students to stand up against anti-Semitism. I felt at the time that the message was a positive one for the students”.

Seems that Sebastian Gorka has been labeled antisemitic and  downright evil. How dare Ms. Polonsky encourage her students to listen to Sebastian Gorka at AIPAC?  AIPAC; the Israel- America love fest? Was Gorka there as a mole for the Jew haters?

Let’s say the allegations made against him are true. The Forward published  evidence that “Gorka, President Trump’s top anti-terrorism adviser, had documented ties with fascist, anti-Semitic groups just a few years before he assumed a powerful and sensitive position in the White House.

And these allegations were repeated in the CJN article, castigating Ms. Polonsky.

Is he not allowed to change course? To repent ? Do tshuva? Is he to be attacked by gossip? Lashon ha ra forever?

Michael Tweyman wrote in Times of Israel: He has been quoted as saying:

“In everything I have ever done, I have been a great friend of Israel”.

“I have spent my life fighting against totalitarian ideologies…Nobody… has found one sentence that I have said in the past 46 years that is anti-Semitic or anti-Israel.”

He was also the keynote speaker at an Israeli Anti-Terror Conference!

Perhaps we should let the students discuss this?

Then again, the school is up against Bernie Farber; the self-anointed, self- appointed messiah of anti-hate, leader of CAHN. Now, this is a man who whitewashed an Imam who said hateful things about Jews. Whose social media footprint was filled with hate. He said the Imam was “misunderstood.”  In cleansing the Imam, helping in his tshuva, he defamed two Jewish people and B’nai Brith. He admonished us that people can be misunderstood and change. But not Gorka.  How dare Ms. Polonsky “expose Jewish students to Gorka …who may have connections to Hungarian antisemitic groups.”

This is the same Farber who bullied the Rabbi at Beth Tikva over providing a venue for Canadians for the Rule of Law,  a group he finds offensive, to the point that the Rabbi took back his offer. Out of fear for his synagogue and congregation.

Now, this is the same Farber who wrote in a February 11, 2019 CJN article titled, “When Jews Attack Other Jews,”

“We live in an increasingly difficult world where facts alone are no longer necessary, where outright lies by those holding the highest elected offices are uttered without much surprise by most and where the sins of lashon ha-ra (evil speech) and motzie shem rah (defamation) are uttered wilfully by those who should know better.” Farber goes on to suggest that, “Today…I have to confront some in my own community who engage in the un-Jewish practices of intimidation and menace.”

I am breathless as well as gobsmacked. The irony of it all.

Now that another letter has been sent by other alumni, castigating the administration for folding, appeasing, what will happen?

The actions of TanenbaumCHAT in the wake of the incident regarding Sebastian Gorka and Mrs. Aviva Polonsky at AIPAC has deeply disturbed many of us alumni. We all remember CHAT being a school which was unwaveringly committed to Zionism and open inquiry. This is what makes CHAT such an excellent institution for Jewish learning, and many of us are concerned that CHAT is, in a moment of panic, faltering on this commitment.

CHAT has nothing to apologize for, except for failing to stand up for one of their own teachers as she and her actions were viciously smeared by radicals such as Independent Jewish Voices. At the bare minimum, CHAT should be staunchly supportive of open inquiry and unapologetically Zionist.

We strongly advise the school to defend their teachers, their institution, their students, and our birthright from vicious slander. We additionally urge the school to reject calls for investigation, denunciation, or discipline of Mrs. Polonsky and to make a commitment to respecting the rights of students to explore multiple viewpoints and engage in Zionist activity.

What lesson will these Jewish students learn in the end? Will they become true People of the Book and question? Or will they slide into Politically Correct Group Think, promoted by the social media bullies?