I buried a bird

And God said, “Let us make man in our image, according to our likeness, and let them rule over the fish of the sea, and over the birds of heaven, and over the cattle, and over all the earth, and over every moving thing that moves upon the earth.” 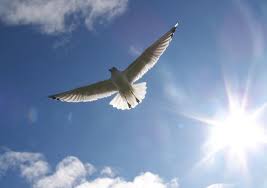 Not too long ago, a bird flew into our front window. This happens a few times a year.  Sometimes one is stunned for a moment or two but most often the bird flies away. I always run out to make sure that all is well. This day, all was not well.

A beautiful bird, dark grey with black markings, was down on the ground. On the stone patio. On his side. So I picked it up. He, or maybe she, was small enough to fit into the palm of my hand. I hoped that it was just stunned, only needing a little assist back into the air. I gently massaged this injured bird’s chest, speaking to him in a soft voice. I thought of giving him CPR but had no idea how. I kept him warm in my hand as I gently stroked his head and softly blew across his face. And then I saw blood dripping slowly from his mouth and I knew that this bird had died. And I held him as his nefesh returned to his Creator.

And I found a quiet spot where I could bury him and keep him safe, while dust returned to  dust. And I marked his grave with a rock. A permanent reminder.

I worried. Was this the mother? Was she foraging for food for her chicks? What would happen to them?  How long would they wait for their food, calling out, beaks open?  Would they survive her death?

He gives the animal its food, to the young ravens which call out. (Psalm 146:9)

And what if this were the father? Was the mother waiting and wondering? How would she care for the chicks without him? How long would she wait for him, or he for her?

All the while I remembered the story of the mother bird and her nest.

If, along the road, you chance upon a bird’s nest, in any tree or on the ground, with fledglings or eggs and mother sitting over the fledglings or on the eggs, do not take the mother together with her young. Let the mother go, and take only the young, in order that you may fare well and have a long life. Deuteronomy [22, 8-9]

This passage has stayed with me over the years. It is so remarkable in a book written so long ago that we, who have dominion over all that we see, are reminded that we must show compassion to all of God’s creatures, great and small, for they are all in our hands.

Judaism teaches us to feel empathy for all God’s creations. As Maimonides taught:

“A righteous person considers the life of his animal.”

Judaism has always recognized the link between the way a person treats animals and the way a person treats human beings.  A person who is cruel to a defenseless animal will undoubtedly be cruel to defenseless people, and a person who cares for the lowest of creatures will certainly care for his fellow man.  The Talmud specifically states that Moses was chosen for his mission because of his skill in caring for animals. His concern for his flock of sheep no less than his concern for his people.

I recently read that birds have played important roles in Jewish history. This from Aish.

After the great Flood, Noah dispatched a raven and then a dove to determine if it was safe to leave the ark. The Torah reminds us of how God swiftly removed our nation from slavery: “You saw that which I did to Egypt, and how I lifted you on the wings of eagles.”

Later, God granted King Solomon extensive wisdom and he learned the language of the birds. When Elijah the prophet was hiding near the Jordan River, it was the birds that brought him food every day.

In fact, God uses the bird to symbolize Jewish continuity and faithfulness.

This Midrash about a dog provided comfort. A dog saved some shepherds from unwittingly eating poisonous food, by eating the food himself. The heroic animal immediately dropped dead. The shepherds were so grateful that they buried the dog and placed a marker by its grave.

As we strive to emulate our Creator we have a responsibility to take care of the needs of all creatures, great and small, beasts and all cattle, creeping things and winged fowl and to alleviate their suffering.. This is an extraordinary lesson about the value of all life.

Not too long after I buried this beautiful bird, we found a mourning dove sitting on two eggs in a nest she had built in our wood shed beside the house. 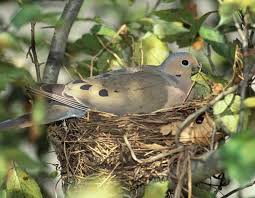 How ironic that it was a mourning dove whose drawn-out calls sound like laments. I was worried. It seemed so late in the  season to be birthing chicks. But she had picked a perfect location; sheltered from the elements but with  an easy escape. She-or he-as the fathers also do their share of babysitting, looked at me. Didn’t move. Didn’t blink. Just seemed to listen as I reassured her that all would be safe. In no time at all the eggs hatched and soon we could see the babies.

And then they were gone. And I was worried. The babies seemed so young. Would they be okay? And then I looked up, and there, high in the birch tree, I saw the mom, or the dad, and the two chicks sitting on a limb overlooking their domain; all together. And I was relieved. The “babies” weren’t alone.

Once again I was reminded of the life cycle. And all was well in my world.