Ibrahim Hindy sets his own definition of antisemitism in Muslim prayers 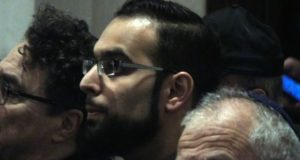 On April 3, 2018 Ibrahim Hindy, Imam of Dar Al-Tawheed Islamic Centre in Mississauga, Ontario was asked on 1010 News Radio if his mosque had been associated with any speaker who embarrassed him in anyway. He said yes. But:

“Apparently, you know, he came, he gave a speech and, you know, he didn’t say anything really wrong in it, but then I found out later and I was embarrassed later that in other countries yet said things that really were anti-Semitic, not only anti-Semitic, a couple other things he said that were kind of hateful towards other countries and I had no idea, right, so I mean I felt embarrassed. I reach out to the Jewish community right after that cause I felt, I felt really bad about that, and you know it’s challenging, but we have to do better.”

The “he” about whom Hindy referred is Shaykh Nash’at Ahmad, a well-known scholar from Egypt. Hindy has now described some of Shaykh Nash’at Ahmad’s sermons as “anti-Semitic.” Ahmed had been invited to speak at the Dar Al-Tawheed Islamic Centre in December 2016.

According to Al Jazeera Center for Studies, Shaykh Nash’at Ahmad is affiliated with the Egyptian Salafi movement which was subjected to security restrictions and even arrest and trial in various cases related to fatwas, or Islamic edicts, urging the support of Mujahideen (Muslims who engage in jihad) in Palestine and justifying the 9/11 attacks.

What statements are considered “anti-Semitic” according to Ibrahim Hindy? The following are excerpts from Shaykh Nash’at Ahmad‘s sermons in Egypt (originally in Arabic) that were published by media outlets in Canada and “embarrassed” Ibrahim Hindy:

“O Allah, destroy the Jews and whom they ally with… count their number; slay them one by one and spare not one of them.”

“[O Allah] Destroy the Russians and purify the Muslim lands from their filth [danas]. O Lord, destroy all aggressors, including the Shiites, Bashr [Assad], Alawites and others. O Allah, destroy the aggressors who are the Jews and those who support them… O Allah, they corrupted your land and You do not like the corruption… O Allah, purify the Muslim land from their filth [danas] and squalor. O Allah, purify imprisoned al-Aqsa [mosque] from their hands [of the Jews]. O Allah, restore the Caliphate [Islamic State] for the Muslims.”

Based on Hindy’s own statement, it appears that he defines supplications to invoke Allah to “destroy” the Jews and to annihilate them all as expressions of antisemitism. Asking Allah to “purify” the Muslim lands from the “filth” of other nations is perceived as “hateful”. 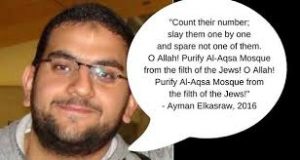 “Purify the Al-Aqsa mosque from the filth [danas] of the Jews.

Would Hindy agree that Elkaswary’s supplication is also antisemitic and hateful based on Hindy’s own definition?
On April 2, 2018 Bernie M. Farber,  an expert on white supremacism, a board member of JSpace and the former chief executive officer of the Canadian Jewish Congress, set his own definition of antisemitism. According to Farber:

“Denying Israel’s right to exist, virtually the only country of which such a sentiment is expressed, crosses the line into antisemitism.”

These definitions of antisemitism should serve as guidelines for organizations that fight antisemitism such as  the newly minted Canadian Anti-Hate Network (CAN), which takes its inspiration from the Southern Poverty Law Center in the U.S. The CAN is lead by executive director Evan Balgord and is chaired by Bernie Farber.