This is about the Yazidis. You are forgiven if you know little to nothing. The UN has been too busy attacking Israel to spend time saving the Yazidis from the murderous hands of ISIS. The Yazidis had been denounced as infidels by Al-Qaida in Iraq, a predecessor of Isis, which sanctioned their indiscriminate killing. ISIS has set as its goal the total eradication of the Yazidis, a people with a 6000 year old history. Estimates put the global number of Yazidis at around 700,000 people, with the vast majority of them concentrated in northern Iraq, in and around Sinjar. They are predominantly ethnically Kurdish.

How many are alive today? 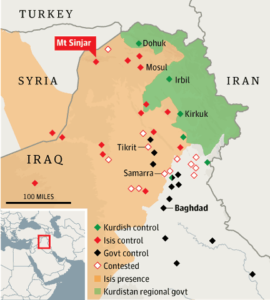 The Yazidis are being murdered for the crime of being Yazidis; for being infidels. For refusing to accept Allah. Do you think that they are the only ones targeted? Do you think if we ignore them that ISIS and their brothers will not go after all the other infidels:The Christians, Jews, and atheists?

Have we conveniently forgotten the lesson of Niemoller? “First they came for…”

Members of this murderous group are here in Canada. We can thank our PM for this. Because he believes that a Canadian is a Canadian is  Canadian. And it is our obligation to rehabilitate these animals, yes animals, people devoid of the Divine Spark, with art and music therapy. This is far more important than anything else we, as Canadians, can do.

A Yazidi woman, now living in London Ontario, Canada, who escaped from the clutches of ISIS, from perpetual rape, passed around to 13 men for some months and then returned to her original “owner” who bought her back. reported to the authorities that she saw her tormentor walking around London, Ontario. She told her story to Barbara Kay at the National Post. The response to her report giving the man’s real name to the authorities:

This is a man who “put a gun to her head or mock ‘hang’ her children to keep her submissive. He would constantly tell her, ‘You are an infidel,’ and ‘You are dirty.’”

This reminds me of the horror that has been taking place in Britain where for years authorities refused to go after Muslim rape gangs-for fear of being labeled racist or worse-Islamophobic. Is this what is going on in Canada?

Nazi war criminals wandered through the West for decades. Living a good life. It took decades to name them find them and put them on trial. Yet, here we are allowing a named war criminal to walk away. Is this ISIS fighter a dual citizen of Canada? Did he just manage to get through our immigration department? Does it matter?

I attended a gathering of concerned citizens across all religions to listen to the stories of the Yazidis.

Mizra Ismail spoke. He is Chairman if the Yezidi Human Rights Organization-International. 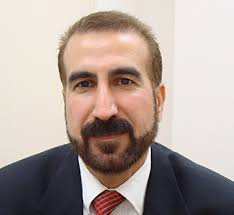 He was dressed in a jacket and tie. Sitting calmly at the table waiting his turn to speak. And then he did. Quietly, calmly, as if he were reading a grocery list. Details about men murdered by Muslims-ISIS. Men and boys, often by decapitation; too often in front of family. And the women and girls taken as sex slaves for ISIS. Raped over and over again. The intent of ISIS is to wipe out all traces of the Yazidi from the face of the earth-by murdering men and boys and raping the women.

He told a story about the food given to the women. Turned out it was the cooked flesh of their babies whom the ISIS members had taken from them and murdered, and then served.  All said rather calmly. Because you know he has told this story one time too many. I wonder how many times he has given this same speech to indifferent ears.

Where are the good Christians from Canada? Not only are Yazidis under attack, so, too, are the Chaldo-Assyrians. Where is the call to action? Where is Jennifer Miedema, Chair of the Refugee Ministry at Compass Community Church(Baptist), Orangeville, Ontario who called for a meeting with her Member of Parliament to attack Israel for the treatment of refugees-safe and well fed in comfortable homes-but scheduled to be deported back to Africa. Compared to Iraq where the Yazidis are being murdered , Africa is a dream home. As far as I am aware these Christians attacked Israel, but not Iraq, not ISIS, not our government for doing nothing about  real genocide.

Oh Canada, another Liberal government with the attitude “None is Too Many.” Room for hundreds of ISIS killers, and thousands of Muslim refugees who will have the opportunity to go home because they will be able to go home at some point. But little to no room for Yazidis and little or no protection for them in Iraq. There is no longer any home for the Yazidis. Their home is gone. Like the homes and hometowns of Jews thrown out of the Middle East in 1948 and Europe in WWII.

For the last 1,400 years, the Yazidis have faced 74 genocides in the Middle East, including the ongoing genocide by ISIS in Iraq and Syria, which began on August 3, 2014.

What have we done in Canada?

Other than being pre-occupied with the rehabilitation of ISIS members, our Prime Minister is concerned about the rights of women to unfettered abortion. “An organization that has the explicit purpose of restricting women’s rights by removing rights to abortion and the rights for women control their own bodies is not in line with where we are as a government and, quite frankly, where we are as a society,” Trudeau said.

But hate brought to Canada by “extremist Muslims”?

This is our government’s priority: not ISIS, and not the Yazidis who were fed their own children.