Is it love of other? Or antisemitism?

Jennifer Miedema, Chair of the Refugee Ministry at Compass Community Church(Baptist), Orangeville, Ontario, “’wants to change the world or at least the bit that she has in her sights at the moment.” So she organized an opportunity for people to come and sign a petition exhorting the Canadian government to expedite the vetting of 14 migrants (illegal) from Israel, whom the group wants to sponsor. Time is running out. Ms. Miedema exhorted all to attend.

“Everybody come out and see first-hand the crisis in Israel. There will copies of the petition to sign.”

The theatre in which the event took place was festooned with flags from Arab countries with the Israeli flag front and centre.

And one of the organizers felt comfortable enough to say that the migrants were being kept in concentration camps in Israel. Think about that. No editing, no fear, just a straight comparison of Israel to Nazi Germany, as if that was the most normal of things to say.

Holot, an open facility in the desert can host 1,200 illegal migrants.

They are allowed to leave to work during the day.

Illegal migrants receive wages which they can send home.

Those held at Holot are provided meals and a monthly stipend of 480 shekels. 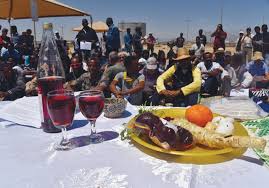 Why did people come to the event?

Was it their concern for migrants? Or was it Israel bashing?

Here are some excerpts from the article “Local ministry trying to find 14 refugees a home” in the Orangeville Citizen calling to people to come out and sign that petition.

“…the UN, and governments calling on Israel to take a more humane approach to the problem, to find other solutions to what may not be as hard to solve as one might think. Also, the fact that Israel itself is a land of refugees who fled the terrors of World War II Europe and found a safe refuge in the newly formed means the country cannot now turn its back on those similarly endangered and seeking refuge. Rabbis and other Jews are offering to house and hide some of the refugees, in reflection of Anne Frank.

“Observing that the individuals are now at risk of being deported from Israel to an unnamed African country where they will be in danger again, the petition calls on the Canadian government to react to the impending  humanitarian disaster that is looming in Israel as it plans this mass deportation and to add the Canadian voice to the others calling on Israel to rethink its approach to the dilemma.

“The eyes of the world are on them.”

Israel is not a land of refugees. Jews are not refugees in their own homeland.Israel takes in thousands of people every year. Jews fleeing Europe, today. Jews flown in from Ethiopia and India. Israel is no more required to take in migrants; as the vast majority of these people are male economic migrants; than any other country.The Dublin Regulation is streamlining asylum management in Europe by only allowing an asylum application to be processed by one country; normally the country where the person first arrives in Europe. It seeks to avoid ‘asylum shopping’ when a person applies for protection in one country after being rejected by another. Asylum seekers should have a close connection to a country for it to be considered a safe third country.

Why should Israel be held to different expectations?

These migrants had to come via another safe country to get to Israel. Egypt is the primary country. Are the leaders of the Compass Community Church suggesting that Egypt is not a safe country? What about the other African countries? There are 54.

Although the article and the people responsible for the event want to disparage Israel, the problem is in Canada. Hursh Jaswal, a spokesman for Immigration Minister Ahmed Hussen, said the government remains committed to orderly migration and an efficient and fair system. Yet the numbers seeking asylum are on the rise as is the backlog to review them.

Yet Canada is having no problem repatriating 180 ISIS terrorist traitors.

“If a country won’t take back their foreign nationals, CBSA does not give up; it continues to work with other government partners to put pressure on the country to accept their citizens back.” Hmmm

So refugees from all over the world are having trouble accessing Canada. But the good Christians of Orangeville and the Compass Community Baptist Church doing their “good works” choose to attack Israel.  “All eyes are on Israel.” But not Rwanda for making it difficult for their brothers and sisters to stay in Africa?

Israel is offering a very humane approach. Israel has offered US$3500 per person plus US$5000 for each migrant going to Rwanda. This despite the fact that there are Holocaust survivors in Israel living in poverty. That money would certainly help them.  What other country offered this help to resettle to ILLEGAL migrants?

Contrary to statements that these migrants will be in danger again if sent to Rwanda, Rwanda has been ranked among the safest countries in the world that provide conducive atmosphere to people who walk alone at night, according to the Gallup Global Law and Order 2015 Report. And Rwanda has agreed to take these migrants. One must never let facts get in the way of a “good story.”

Why did this Christian community choose to malign Israel when Israel is far kinder and gentler than many other countries regarding migrants/refugees? To what end?  Was it to persuade more members of the community to come and sign the petition because this loving, caring, Christian act of bringing migrants to Orangeville not enough to draw people to the cause?

Was it innate antisemitism?

Is it my imagination or is bad-mouthing Israel a real drawing card.

I contacted the journalist who wrote the article as well as the Compass Community Church asking for comments. The journalist did not respond. Here is the email from the church.

“In response to your questions, we apologize for any misunderstanding or offense. We simply seek to support refugees, displaced people, and those experiencing hopelessness as we are able.”

“Thank you for your apology. But I think what your representative said was antisemitic-the worst kind of antisemitism. It seems your Church thinks the ends justify the means. Scapegoating Jews is acceptable in order to take care  of “refugees, displaced people, and those experiencing hopelessness”? How do you intend to fix this? Will there be an apology to the community from the spokesperson and the Church? Will leadership from the church apologize from the pulpit? Will you post this apology on all the pages where the event was shared? How do you intend to make amends?”

“What do the Jewish people owe you in Orangeville? Or anyone else in the world?”