In Defense of the “N” Word

The trouble with most people is that they think with their hopes or fears or wishes rather than their minds.”- Will Durant

This article was originally posted in Times of Israel-November 2014. Three years later, and I think you will agree, political correctness and the abuse of the abuse of cultural appropriation are exploding.

I find myself sharing the words of Philosopher Will Durant on a regular basis.

In a world where facts are eradicated by wishful thinking; the Holocaust is denied and now Erdogan claims America was discovered by Muslims; we must be ever-vigilant in preserving history. To do that we must protect language. There are some words that must never be forgotten.

There is discussion, today, of expunging the “N” word from our vocabulary. I fear removing this word will distort history.

There are words that carry within them years of haunting memory. Nazi comes to mind. No need to say more. We know the history embedded in those four letters. If we removed the word from the lexicon to protect the feelings of those who experienced Nazism we would do a disservice to their descendants; victims and victimizers.

There is an icon, today, that is slowly being removed from the culture that speaks to the age of irrational, ontological hate-the age of slavery- the treatment of black people as something other than human. That icon immediately brings to mind a myriad of emotions, a plethora of pictures reminding us of the dehumanization, denigration and humiliation of a group of people not for anything said or done, but merely for being black. The icon is a word consisting of six letters.

I am a white woman writing to save that icon, the “N” word.
The souls of black people have been under attack in many different ways, but one of the most hurtful has been language. And there is one word that is particularly painful. It begins with “N.” We can’t say it or write it anymore. It is being removed from books that are considered classics, books that speak to us through time about a particular epoch when freedom was a gift of the “privileged,” that came with being born white.

The “N” word, like Nazi, carries within a history of man’s inhumanity to man. It screams to us about the arrogance of white people who considered themselves to be entitled to an intrinsic value not to be accorded to those not white. It has been, pardon the expression, whitewashed. I fear not to protect the sensibilities of the black population, but to assuage the shame of the white people. By stripping it down to a letter it loses its power as a symbol of an age of horror, an age of man’s inhumanity to man for no other reason than this group was black in a white world, almost presaging the 20th century Aryan moral depravity.

It was watching “Django Unchained” and “Twelve Years a Slave” that led me to believe that removing the word from old classics that spoke to and documented the time was in the best interests of the white world, not those of colour, and certainly not those whose families were abused by slavery.

The word with six letters-a word I cannot write- is the word that represented a time that gave Lincoln the moral courage to push through the Thirteenth Amendment. This is the word that propelled Dr. Martin Luther King to speak of his dreams.
I think we need to keep that word to remind us of the importance of education, teaching morals and values that hold high the sanctity of all life-no matter the race, colour, creed or religion. It is learning about “the other” in order to make “the other” an “us.” History proves this isn’t easy.  But I think that removing the symbols of that hate too soon can be counter-productive.

Turning the six letter word I cannot write-into the “N” word” is an attempt to remove the guilt and shame that should still be felt by white culture. We need powerful symbols to remind us that we are all God’s children, equal in His eyes and deserving of respect.

I worry that either removing the six letter word I cannot write from books or changing it to the much more pleasant expression the  “N” word, could lead to wiping out the history, the moral and ethical failure, it carries.

Imagine a little girl four generations from now reading Tom Sawyer/Huckleberry FInn. She looks to her mother and says, “Mommy, what does the “N” word mean?” 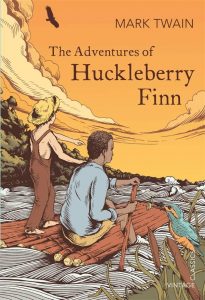 “The “N” word? O, yes, I think I remember. I don’t remember the word, itself, but I do remember it means something terrible.”

Wilhelm von Humboldt said in the eighteenth century, “Language is, as it were, the external manifestation of the minds of the peoples. Their language is their soul, and their soul is their language.”

We must protect language to protect history.