Is it time for feminist Trudeau to call for a “groping” inquiry?

Do you think it is time for feminist Trudeau to call for a “groping” inquiry?

In 2008 a woman working for Creston Valley Advance in British Columbia as well as the National Post, reported that she had been groped by Justin Trudeau at a public event. This was written up in the local newspaper by the victim, and it went unrebutted for almost two decades.  “It is fact, now.”

The paper stated, as fact, that Trudeau had “handled” the female reporter and then, after learning that she also wrote for the National Post, apologized for touching her.

“I’m sorry,” the newspaper quoted Trudeau as saying the day after the incident. “If I had known you were reporting for a national paper, I never would have been so forward.”

For reasons of which I am not aware, someone kept a copy of the paper with the article and anonymously sent it to Warren Kinsella   who posted it on Twitter June 6, 2018.

Kinsella also wrote “She was now married, living in a different Western city, and no longer working in the news media.  She didn’t want to talk, I was told.”

According to the anonymous reporter: “He (Trudeau) had to write an apology to her.”  Where is it?

So, I am asking myself, why did someone keep that article for 18 years? Why did that person choose to share the article now? One could theorize that it was an attempt to extort Justin Trudeau. Or is it being shared now in an attempt to embarrass or take down the sitting Prime Minister?

Whatever the reason for the re-appearance of the article with the accusation, I think it is time for the PM, himself, to call for an inquiry. As he is a feminist I should think that this would be most important to him and the Liberal government whose cabinet is gender balanced. There are fifteen women and fifteen men (sixteen when including the PM).

I suggest that he needs to call the inquiry to help the woman who made the accusation as she is in a moral dilemma. If she lied her reputation will be destroyed. And we cannot walk away from that possibility; we know there are women who lie. And if it is the truth, there is the good, if not great possibility that her reputation will be ripped to shreds because that is what we do these days. Facts be damned. Character assassination is the call of the day. Her family will be dragged through the mud with her. She could lose her job.

The PM should take the decision away from her to protect her, and call for an inquiry.

And if not the PM, surely the Minister of Status of Women, Maryam Monsef, should be asking for an inquiry.

Conservative Member of Parliament Michelle Remple has decided not to say anything because she believes that in the era of #MeToo it is up to the woman to decide if she will speak.

But she has spoken. Eighteen years ago.

15/ Worse, the media coverage that has hinted at that story doesn’t warrant #metoo level scrutiny because there isn’t a public pattern of behaviour, risks setting a new bar for how publically adored figures are treated in these situations. It risks making #metoo partisan.

Why does it matter if there is a pattern of behaviour? After all, this PM promotes the rhetoric of feminism that includes asking permission to touch another.

Yet, he does like to kiss women he may not know.

And he thinks it is OK to rub a pregnant woman’s belly. 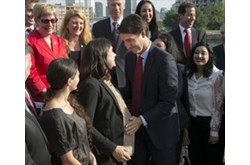 And his hand does wander. 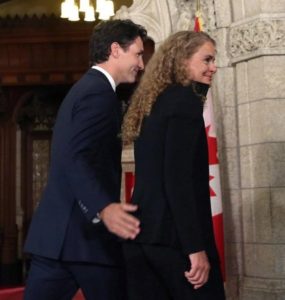 “Trudeau also accepted the resignation from cabinet of one of his ministers, Kent Hehr, for similar reasons. “

He is now PM. He has the opportunity to implement his feminist values.

If a woman in Canada cannot speak freely, now, under a feminist government, when will any woman truly feel safe?