Manchester: Cause of terror-Political Correctness

There is no meeting of minds, no point of understanding with such terror. Just a choice: Defeat it or be defeated by it. And defeat it we must~Tony Blair

I was in Britain when the terror attack took place in Manchester-a mere thirty miles away from where I was staying.  I read that British security forces were aware of this terrorist. He had been on their watch list. He had traveled to the Middle East. It seems, though, that fear of hurting the feelings of Muslims was greater than the obligation to protect British people from terror, so they did not pick him up.

We left Britain a few days later, via Manchester airport. Let’s face it, airport security is a pain at the best of times. Manchester reacted to the terror attack as if there had never been one ever before, anywhere. Their actions reminded me of New York just after 9/11. I was waiting for them to take away my nail clipper.

I think the airport workers can’t tell the difference between a terrorist and a tourist. There are some machines that I refuse to go through at security. In New York and Baltimore I am given the right to a pat down rather than go through their X-ray machines. Not Manchester.

I saw the machine and said no. I said I would be happy to go through the metal detector which was up and running and there were passengers allowed to go through. Oh no! The pompous, condescending British airport employee informed me that if I refused to go through the other machine it meant I must be hiding something. Not only that, but how dare I complain. I had agreed to these procedures when I bought my ticket!

Hiding something? I was wearing a fitted short dress with short sleeves and l a pair of leggings. Hard to hide anything there. I had already removed my jacket and my scarf, my jewellery. And my shoes.

He lectured me. “We have had a terror attack!”  No! Really? And that gives him the right to be disrespectful? What kind of attitude is that? You would think they had never entertained the possibility that there would be a terror attack in Manchester. Not Manchester! As if Muslim terrorists care about the places they commit terror or the people they terrorize. Was he suggesting that  Manchester Airport was just now working out its security because of that attack? Or is this the way they treat all passengers?  Why not? We all act like lemmings. I watched as people went ahead of me, arms in the air, as the machine did.. what? Who knows.

To add more insult, if one refuses to go through their  machines, they not only get an enhanced pat down, they must fill out forms! Forms? This is how they protect the public from terror by having them fill out forms?

I looked up enhanced pat down when I got home.

If you do not wish to be screened by a security scanner, you will undergo an enhanced hand search conducted in private. This will involve the removal of all outer clothing, and the loosening and/or removal of inner garments. The Department for Transport (DfT) considers that this alternative offers a comparative security assurance to passengers.

I am a tourist not a terrorist.

I asked for the supervisor. While this is going on an airport employee wearing a flowing black hijab was watching-amused. Alice was laughing in Wonderland.

Finally the supervisor arrived and also explained that I would have to fill out forms and go through an enhanced pat down if I refused the scanner. He told me that there was nothing wrong with their machines. Lovely. No radiation! Right. I walked through to avoid having to fill out the forms, knowing that I could also miss my flight home. And still someone came over to check with the wand!  My medic alert bracelet! Oh and my underwire bra. All of which would have been picked up by the metal detector machine most of us go through at the airport.

The supervisor did not tell me  that “passengers will be randomly selected for scanning or on activation of the normal security checks. They will then pass through the scanner which highlights those areas where items that need to be checked out are being carried.” Hmm. I guess he looked at me and decided I was a terror threat.

Well done Manchester. I am a tourist not a terrorist.

While going through all of this I watched as an older man was pulled aside for extra security. Random, don’t you know!  The West isn’t just falling into the the hands of Muslim terrorists, we are throwing ourselves into their arms! We are giving away our freedom and privacy because of Muslim terrorism compounded by political correctness and the fear of calling Islam out as a xenophobic. homophobic misogynistic, virulently antisemitic ideology.

Save me from political correctness! Save all of us.

I wonder if Manchester didn’t really believe in Islamic terrorism until it happened to them. Did they refuse to believe the calls of “Death to the West?”

If the British security forces had done their job this last act of terror would not have taken place. Instead, they were taken in by the siren call of political correctness and we all suffer for it-too many with their lives. 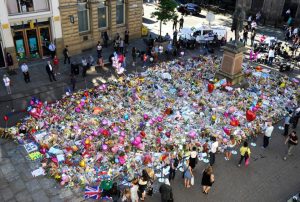 We in the west are aiding and abetting Islamic terrorism by becoming sheep. And the shepherd is Islam.

Welcome to the real world Manchester.