Mark Tapson is the Shillman Fellow on Popular Culture at the David Horowitz Freedom Center.

Totalitarian Cancel Culture, the bullying trans lobby, and the race-mongering indoctrination of Critical Race Theorists, among other leftist assaults on society, have turned daily life into everyday battlefields for normal Americans who stand in the way of Progressive social engineering.

To address this ubiquitous, corrosive phenomenon, Canadian author Diane Bederman has written Bullies of Woke and Their Assault on Mental Health just published by New English Review Press. Ms. Bederman is also the author of Back to the Ethic: Reclaiming Western Values, The Serpent and the Red Thread: The Definitive Biography of Evil, and The #IslamophobiaIndustry: The Insidious Infiltration of Islam into the West, all of which I have either reviewed or interviewed her about (see links) for FrontPage Mag.

Bullies of Woke documents the serious damage that bellicose leftist activists are wreaking upon the mental health of our children, who are subjected in schools and in the culture at large to unrelenting pressure to conform to, if not actually celebrate, woke ideology. In many cases our children are literally being bullied to death – committing suicide because they are unable to handle the aggressive bullying from the fanatical proponents of Progressive-driven movements such as Critical Race Theory, transgenderism, and Cancel Culture. Bullies of Woke is simultaneously a guidebook to the modern woke movement and a call to action for the silent majority to push back and restore common sense and bedrock Judeo-Christian values in our homes, our schools, and our nations in the West.

I asked Ms. Bederman some questions about her new book.

Mark Tapson:           Diane, your book covers a lot of ground and many questions come to mind, but let me just begin by asking what inspired you to view the left’s ideological assaults of Cancel Culture, Critical Race Theory, and the like through the lens of its impact on the West’s mental health?

Diane Bederman:   Mark, as much as I would like to take credit for this idea, a friend and I were talking about our world today, and we went from discussing the bullying by Progressives to mental illness. I had previously written about bullying and mental illness on my blog. And so it began.

I wrote this book to give courage to our parents and grandparents and our politicians, no matter race, color, creed or sexual orientation, to fight back and protect our children, our families, our communities and our countries from the bullying by the new religion of Progressivism and their apostles of fear. Their constant bullying is destroying Western culture and affecting the mental well-being of our children that can last generations.

MT:     How are social media “influencers” spreading this culturally-acquired psychosis, as you call it, of wokeness?

DB:     We, the adults in the room, have stood by as our children have moved to their “screens” to get information. Transgender spokespeople are all over social media. And they speak to your children in your absence. It’s akin to letting pedophiles come into the room. They are teaching our children that one can pick one’s sex. They are sharing their stories! One tells of her “epiphany” at the age of five! She knew she was a girl. Or he knew. And his/her parents were thrilled. Who is more ill: the child or the parents? Hear something enough at an impressionable age, from people who are “famous” long before your pre-frontal cortex is developed (at 25) and you will believe. This is culturally-acquired psychosis.

MT:     One of your chapter headings is “Cancel Culture Cancels Family.” What is the danger that Cancel Culture poses to the traditional nuclear family?

DB:     The family is the smallest unit of authority in any society. Parents teach the morals and values of that society to their offspring. Cancel Culture promotes Marxist theory that the abolition of the family is essential to promoting communism – as you so succinctly wrote elsewhere and I shared in the book.

Cancel Culture demeans the work of mothering, the importance of raising one’s own children. Seems it is more important to go to work and make widgets than raise children; except we can recall a defective widget but we cannot recall a “defective” child. It demeans and denigrates fathers. Look how many children are being raised without a father – as if fathers had nothing to do with creating a human being. These children are failing.

If Cancel Culture and Progressive ideology succeeds in tearing apart the family, our society will fall from the bottom up as diversity, inclusion and equity destroy us from the top down.

MT:     What is “malignant normality” and what happens to a culture that succumbs to it? What is an example of it that you can point to in American and the West today?

DB:     I learned this term from a neighbor who hated Donald Trump. Malignant normality as described by John Gartner, a practicing psychotherapist at Johns Hopkins University:

“Malignant normality is when a malignant narcissistic leader takes control of a society and gradually changes reality for everyone.”

Well, reality has certainly changed in America. But not from a man; rather from an evil ideology that promotes the idea that we are the object of our fate, not the subject of our destiny. We are at the mercy of our characteristics and not our character. We are being taught by this new Progressive Woke agenda that we are either victims or oppressors based on our skin color. This ideology is diametrically opposed to the ethic that underpins America: that all people are born with equal intrinsic value, all life is sacred and we have free will, what Professor Jason D. Hill calls “moral agency.”

This malignant normality has infiltrated every aspect of our society from media to government, and most dangerously, education via industrialized bullying.

Malignant morality takes away our sense of freedom “to be.” And as I shared in the book, freedom is extremely important for good mental health. Good mental health is characterized by having personal freedom… to be free to make good choices for one’s self and others.

MT:     Can you briefly sketch the truth about the “white privileged people” who have been demonized by Progressive bullies as history’s “victimizers”?

DB:     The attack on white people as privileged is appalling; as if white people have always been elitist like the monarchy. I shared the stories of desperate Ukrainians and Irish coming to the New World to escape the hellish conditions in their home countries where they were treated as “lesser than.” They arrived on ships that were often referred to as floating coffins. I shared the story of my father who came on one of those ships, by himself at the age of twelve. I have no idea how he managed to get from the Russian/Polish border to Scotland to get a boat to Canada. He spoke no English. But these are the people whom we call privileged. I guess they were. They were “privileged” to make it alive to Canada and America where they had the freedom to work, to make a living, to provide a home for their children, and to teach them the miracle of the Judeo/Christian ethic of freedom.

MT:     You write that “we are our stories, our narratives.” What happens to our civilization when we allow Progressive bullying to cancel our cultural narratives?

DB:     I write about the Bible a great deal. For those who do not believe in God, the Bible is still a remarkable book because it teaches us how to be compassionate people in a compassionate society and by teaching us about the importance of the individual and the ethics of freedom. Progressive Woke ideology wants us to destroy the past by removing words from our books, by removing books, by taking down statues that reflect on the past. If we do not know our past, how can we move forward into the future?  Back to the Bible. Moses warns the people fourteen times “not to forget.” Our stories are our collective memory. If we erase the stories that made us free how will we remain free?

MT:     One of the book’s chapters stresses the urgency for us to develop resilience in our children. What are a couple of ways we can do that to ensure that the next generation resists Progressive bullying?

DB:     Bullying leads to anxiety which can fall into depression. Many of us have had experiences being bullied. I shared mine in the book. Some children fall into suicide from bullying, especially when it is online, while others rise above.

To make our children more resilient we must stop the industrialized bullying taking place in our schools where teachers are indoctrinating our children with revenge racism: labeling white people as evil. If we are going to prepare our children to be free in a free society we must remind them over and over that they are not victims – of their color or of any other characteristic. We must teach them that no one can take away their self-esteem, which is taught by doing. And no one can take away their “self,” their soul. No one. 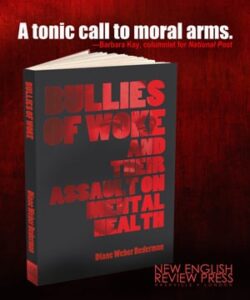 Share
From the Ethics of the Fathers: “Rabbi Tarfon used to say, it is not incumbent upon you to complete the task, but you are not exempt from undertaking it.”