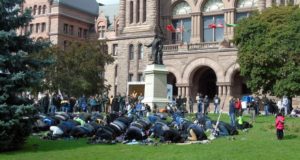 When I was in grade school, all of us, Christian and non-Christian recited the Lord’s Prayer:

“Our Father who art in heaven, hallowed be thy name. Thy kingdom come, thy will be done, on earth as it is in heaven. Give us this day our daily bread, and forgive us our trespasses, as we forgive those who trespass against us. And lead us not into temptation, but deliver us from evil, for thine is the Kingdom, the power and Glory, Forever and ever.”

In 1985, in Canada, a Jew, Philip Zylberberg and two other Sudbury parents, one a Muslim and the other a non-believer, filed a lawsuit against prayer in schools under the Charter of Rights and Freedoms which had just been approved in 1982.Three years later, in September 1988, these three complainants won a decision against the Sudbury school board which led to the removal of the Lord’s Prayer from all Ontario public schools.

In the 1990’s, just a few years after The Lord’s Prayer was removed from public schools, Muslim families requested the right for their children to pray in school; particularly on Friday, their Holy Day. Schools in Peel have been providing Muslim students a space for Friday prayers for 20 years. The school board stresses that it is not promoting or teaching any religion.

In the past few years, parents of non-Muslim students have lodged complaints.

Ram Subrahmanian, a Hindu, a member of the group Keep Religion Out Of Our Public Schools (KROOPS), whose youngest child is in the last year of high school in Peel, says he is against all religious practice at schools.

“You cannot expect the public system to meet the requirements of your religion. As Canadians, we are secular, we are accepting and we are tolerant but that doesn’t mean that we will allow others to impose themselves on us.”

He says his religious group is sensitive to issues involving Muslims. Since 1947 India and Pakistan have fought three wars with each other since then; and violence between Hindus and Sikhs and Muslims in India itself have also been bitter and violent.

Ron Banerjee, of Canadian Hindu Advocacy, said he received complaints from Hindu parents who were concerned about the potential for inflammatory preaching against their faith.

Amira Elghawaby, the communications director for the National Council of Canadian Muslims has stated that this issue is

“…simply Islamophobia. It’s anti-Muslim sentiment … couched in a concern about religion in schools. It would be disheartening if indeed people are bringing any sort of baggage from their own maybe experiences in another country to this debate. That would be unfortunate.”

Considering the ruling to remove Christian prayer from the schools, should we be opening our schools to prayer from different religious groups? Does allowing different groups to break off into their own prayer spaces promote diversity and inclusiveness?

Do the prayers being shared in our public schools promote tolerance, inclusion and accommodation? Do they promote our common shared values of caring for the other and acknowledging that all people are born with equal intrinsic value, and that all life is sacred?

Muslims who pray 5 times a day, repeat at least 17 times the verse: “The path of those you bestowed favours upon, not those who have incurred (Your) wrath and those who have deviated.”

Muslim scholars explain that those who “deviated” from Allah are the Jews and Christians. But especially the Jews, who angered Allah, who cursed them and “turned them into monkeys and pigs,” according to Osman Haji, Imam of the Sahaba Masjid mosque in Edmonton Alberta.

From Imam Omar Subedar of the Peel District School Board Faith Leaders Network, Imam at Makki Masjid in Brampton, Ontario and Vice President of Mathabah Institute regarding the verse:

How does this help with diversity in Canada? How does this bring different peoples together in accepting our common shared values: the most important one that underpins the Constitution is that all people are born with equal intrinsic value? Does this prayer not deny that primary value? And should we be concerned that a member of the Peel School board is preaching these ideas?

The Toronto Police Muslim Chaplain (Please note that Toronto is the most diverse city on the world) has taught: “ Al-Timidhi reports in an authentic hadith the Prophet (PBUH) was asked by a companion: those who have  earned your anger  غير المغضوب عليهم,  the Prophet (PBUH) says this refers to the Yahoudi (Jews) and then the companion continues to ask والضاليين the Prophet responds says this refers to the Nasara (Christians) and those who have gone astray.”

I am a multi-faith endorsed chaplain and I have to ask is it helpful in such a diverse city to have a police chaplain speak about Christians and Jews in this way? How does he help bring people together?

Should prayer be brought back into our public schools?