PM Trudeau: Is Al Quds Day compatible with the West?

Prime Minister Justin Trudeau has called on Canadians to put the values he says unite the country – openness, compassion, equality and inclusion – into practice.

“In Canada, Ramadan is also an opportunity to celebrate our country’s Muslim communities, and the important contributions Muslim Canadians make each day.” Prime Minister of Canada, Justin Trudeau 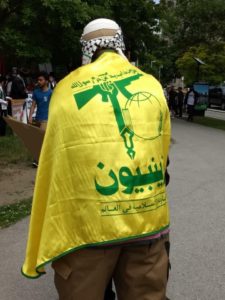 Prime Minister Justin Trudeau talks about his pride in Canada as an accommodating tolerant inclusive and diverse country.

“Canadians have understood that our differences are a source of strength, not a source of weakness.”  He called for the need to “work to ensure that everyone understands [and respects] their neighbours.”

“We of course need to continue to work to ensure that everyone understands that respecting their neighbours, that moving beyond mere tolerance, towards acceptance and friendship is the path that Canada needs to continue on.”

“Islam is not incompatible with Western secular democracy.”

And he said, “Canadians are quick to point out that ISIS is wrong, that Islam is not incompatible with a western secular democracy, a free place like Canada. And I know that our confidence in Canadians understanding that diversity is at the heart of our success as a country, and will continue to be.”

Where is he when it comes to Al Quds day in Canada? 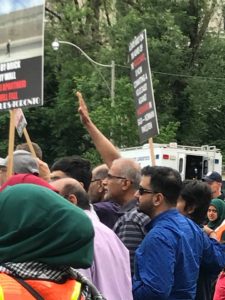 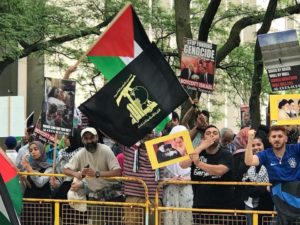 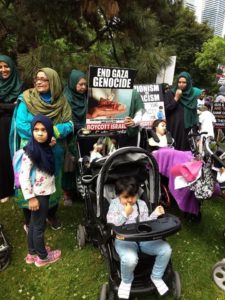 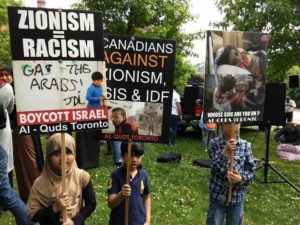 Comparing ISIS, a declared terrorist organization, with the IDF 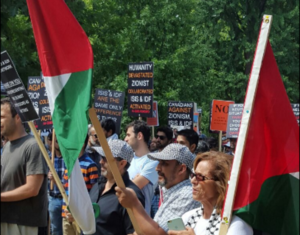 “The Quds Day is a universal day. It is not an exclusive day for Quds itself. It is a day for the oppressed to rise and stand up against the arrogant.” – Imam Khomeini  Islamic Republic of Iran

Quds Day (Jerusalem Day; Quds is the Arabic name for Jerusalem), officially called International Quds Day (Persian: روز جهانی قدس‎), is an annual event held on the last Friday of Ramadan that was initiated by the Islamic Republic of Iran in 1979 to express support for the Palestinians and oppose Zionism and Israel.[1]Nominally, it exists in opposition to the Jerusalem Day celebration instituted by Israel in May 1968, and which Knesset law changed into a national holiday in 1998

Canada listed Hezbollah as a terrorist organization in 2002 and currently has a no-contact policy with its members,” Global Affairs Canada spokesperson Rachna Mishra wrote in an email statement.

But it is OK to fly  Hezbollah symbols in Canada as we saw in the Al Quds Day parade in Toronto 2018?

Is this parade supposed to promote tolerance, inclusion, accommodation and diversity in Canada?

Hate-tourists gather in cities with significant Arab and/or Muslim populations such as Toronto to denounce what they call “world Zionism” and express loathing for Israel. During the 2011 Al-Quds Day rally held outside the Ontario legislature, demonstrators brandished the flag of Hezbollah, while a featured speaker, Zafar Bangash, delivered himself of the view that “Allah willing, I see that day when we, the Muslims, will march on Palestine and liberate Palestine for all the people in the world.”

As I’m writing this, Legislature Sergeant-at-Arms Dennis Clark has approved the use of Queen’s Park once again to the organizers of Al-Quds Day. In effect, Clark told the media that he realized the demonstrators went a little overboard last year, waving terrorist flags and all, but he approved because this year the organizers promised to behave.

Have the demonstrators behaved? Do they fit PM Trudeau’s inclusiveness and diversity?

Listen to young Canadian Muslim children sing about Israel. Listen to what they are taught in Canada. Comparing 9/11 to what happens every day in “Palestine.”

Look at the photo of Palestine. It eradicates the Jewish State.

Calls for Palestine from the river to the sea. This requires the ethnic cleansing of Jews from Israel. Blaming Israel for the circumstances in Gaza-Not Hamas.

An eyewitness at the Parade reported that there were calls for “Death to Israel” in Persian. Another speaker praised Hezbollah and the Assad Regime. Another called for the collapse of the Zionist regime and the American Empire.

In 2017 the Police were called int to investigate the antisemitic lyrics of a song that was played at the Al Quds day rally.

The translated lyrics to the song, Declare It A Popular Revolution, in part say:

“With a Palestinian woman (armed with a knife) we defeated them”… “fill (the bottle) to the top with gasoline, and snatch from him the M-16”…“stab whoever you see, five, six, ten, twelve.”

“Declare a popular revolution,” the lyrics continue… “Make us happy with bombing the bus” and then “cut off (their heads), stab (them), run over (them), launch an attack on them.”

Mississauga Catholic elementary teacher, Nadia Shoufani, temporarily suspended with pay  for spewing anti-Israel rhetoric at the 2016 Al-Quds Day hatefest had urged attendees to “support the resistance (against Israel) in any form imaginable.” On her Facebook account  she also expressed “glory to the martyrs” — including a member of a known terrorist organization who smashed the head of a four-year-old Israeli girl on beach rocks.

In her al-Meshwar article, she contends that despite the “racist discrimination” to which she’s been exposed, they (her Zionist oppressors) “did not succeed in breaking the power of resistance” within her.

Shoufani ended her lengthy article by vowing to continue to expose “the crimes of the occupation” and to continue the work of “boycotting, imposing sanctions and divesting from the usurper Zionist entity.”

She also makes it quite clear that she will not stop quoting the words of Ghassan Kanafani, a leader of the Popular Front for the Liberation of Palestine, defined by the Canadian government as a banned terrorist group.

Palestinians “…have the right to resist their occupation by any means necessary.”  He added: “In the United States, if somebody makes a mistake and walks into somebody’s home, he will be shot, right? Here in Canada, if somebody attacks us we will attack and shoot them, alright? So why is it okay then to occupy Palestinian land and oppress Palestinian people?”

Mallah is a former member of both the federal and Ontario NDP Executives and is a prominent member of the Canadian-Arab community, having served as the Ontario Vice-President of the Canadian Arab Federation (CAF). That organization had its federal funding stripped by Ottawa in 2014 due to its promotion of antisemitism and praise for terrorist organizations such as Hamas and Hezbollah. CAF appealed this decision all the way to the Supreme Court, which declined to hear the case in March, 2014

Here he is:” Palestine from the river to the sea.” And refers to the “illegal state” Israel.

In 2013 there were calls for the murder of Jews in Israel from Queen’s Park in Toronto Ontario.

“We say get out, or you’re dead!” “We’ll give them two minutes and start shooting!”

Where is our Prime Minister? Is Al Quds Day respectful to neighbours? Does he defend Al Quds Day as compatible with Western Values?