In 2014, prior to the election, Liberal Leader, Justin Trudeau, declared “…opponents of abortion need not apply to run for the Liberal Party in the next election because he wants to form a government that is ‘resolutely pro-choice’… I have made it clear that future candidates need to be completely understanding that they will be expected to vote pro-choice on any bills…We check on a number of issues: How do you feel about the Charter of Rights and Freedoms, how do you feel about same-sex marriage, how do you feel about pro-choice, where are you on that?”

These Liberal values are so important that last year, the Liberal Government, under the Canada Summer Jobs (CSJ) programme offered financial aid ONLY to organizations that respect individual human rights in Canada, including the values underlying the Canadian Charter of Rights and Freedoms as well as other rights. These include reproductive rights and the right to be free from discrimination on the basis of sex, religion, race, national or ethnic origin, colour, mental or physical disability or sexual orientation, or gender identity or expression.

I am sharing this with you because Prime Minster Trudeau has endorsed the nomination of Imam Hassan Guillet, a prominent Muslim scholar and spokesperson for the Quebec Council of Imams, for the Saint-Léonard-Saint-Michel riding. 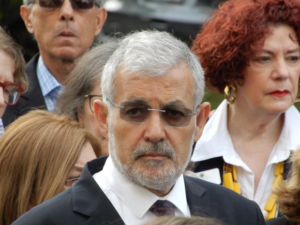 Trudeau has said that he perceives Islam as a religion with values that are compatible with secular and democratic western culture or as a religion that can be reformed by political means so it can gradually espouse the liberal platform. He said, “Islam is not incompatible with western secular democracy, a free place like Canada.”

I sent two media inquiries; one to Imam Guillet and one to the Prime Minister.

I sent an email to Guillet to ask him how he balances Islam with Prime Minister Trudeau’s liberal values: LGBTQ rights, transgenderism, diverse gender identity, abortion, legalization of suicide under certain conditions and legalization of recreational marijuana.

Are you committed to the Liberal political agenda including, but not limited to, promoting LGBTQ rights, transgenderism, diverse gender identity, abortion, legalization of suicide under certain conditions and legalization of recreational marijuana?

Does the Quebec Council of Imams where you served as its spokesperson accept the aforementioned Liberal values?

Has PM Justin Trudeau demanded from you to accept the aforementioned Liberal values? I ask as it is my understanding that they are in contradiction with the Islamic Law, the Sharia. Or has the Prime Minister allowed you freedom of conscience on these matters?

Prominent Muslim scholars in Canada and the United States say that embracing the aforementioned Liberal values is tantamount to committing shirk, practicing idolatry or polytheism, an unforgivable crime if it remains unpardoned before death. How would you respond to these Muslim scholars?

I asked similar questions of the Prime Minister

Are ALL candidates of the Liberal Party committed to the Liberal political agenda including but not limited to promoting LGBTQ rights, transgenderism, diverse gender identity, abortion, legalization of suicide under certain conditions and legalization of recreational marijuana?

Have you demanded that Imam Hassan Guillet, a prominent Muslim scholar and the Liberal candidate for Saint-Léonard-Saint-Michel riding, accept the aforementioned Liberal values that are clearly in contradiction with the Islamic Law, the Sharia, or alternately have you allowed Imam Hassan Guillet freedom of conscience on these matters?

I asked these questions of the Imam and the Prime Minister because Islam does not believe that liberalism is compatible with Western Culture and values.

ICNA Canada shares the book Riyad us Saliheen” with its members, followers and supporters. It says:

“All belong to one Ummah [Muslim nation] with only one goal and pursue the same aims and objects of Islamic guidelines!”

I am particularly interested in the response of the Imam because of the conflict between liberalism and Islam. And I wanted to know if the Prime Minister of Canada is aware of this conflict.

In Islam, shirk (Arabic: شرك‎ širk) is the sin of practicing idolatry or polytheism, i.e. the deification or worship of anyone or anything besides the singular God, i.e. Allah. Literally, it means ascribing or the establishment of “partners” placed beside God. Shirk is one of the greatest possible offenses in the eyes of Allah. It means, roughly, “polytheism”, and is the opposite of tawhid, which is “monotheism”, the assertion of the absolute oneness of Allah.

Those who practice shirk are termed mushrikun: a polytheist, one who falsely associates (something) with God.

American Muslim scholar Daniel Haqiqatjou from Houston, Texas, has written a scholarly article about the dangers of liberalism. He attended Harvard University where he majored in Physics and minored in Philosophy.

…I justify this in terms of the Quran is that as Allah says that he hasn’t made any man with two hearts within him, meaning that you can’t be faithful to two separate faiths, two religions [دين] at the same time.

I do consider liberalism as a ‘deen‘ [دين], as a complete religion and faith even though it’s not considered to be such but we can we can understand it in that way.

If this is true; if liberalism and Islam are two distinct religions, and following two religions is considered SHIRK, one of the greatest offenses in the eyes of Allah, how do Muslims in the Western governments manage to remain Muslim when it appears they are polytheists?

Let’s turn to a Canadian scholar. Mazin AbdulAdhim is a prominent Canadian Muslim scholar and Imam of Iraqi descent who is affiliated with the pro-Caliphate Islamic global movement of Hizb ut-Tahrir. Here are some of his views.

“In terms of morality, the West is absolutely a cesspool of corruption and depravity. The Zina [fornication, adultery], pornography, homosexuality, drinking, drugs, etc, are not only widespread, but they are completely and totally accepted as normal – to the extent that anyone questioning or speaking out against these things are shunned and attacked. The Muslim lands are a saint-haven in comparison, except for whatever has been influenced by the West’s way of life.

“Of course Islam has a specific mechanism of government. No one with even basic depth in the Shari’ah can deny this obvious fact.

“Islam is not to be mixed with Kufr, and Islam is never to be made subservient to any other system.

(Kufr-“not believing in Allaah and His Messenger, whether that is accompanied by denial or it is not accompanied by denial but rather doubt, or turning away from faith out of jealousy or arrogance, or because one is following whims and desires that prevent one from following the message. So kufr is the attribute of everyone who rejects something that Allaah has commanded us to believe in).

Islam rises above all, and nothing is to rise above it.”

He attacked Linda Sarsour because:

“The march she helped organize was a purely secular, liberal, feminist march that stood for gay rights, and many other things forbidden by Islam.”

And I am left in a bit of a conundrum. Is the Imam Guillet suggesting that Islam is changing in Canada and accepting liberal values?  That “Islam is not incompatible with western secular democracy, a free place like Canada”? Will the Imam stand up and say that he believes in reproductive rights and the right to be free from discrimination on the basis of sex, religion, race, national or ethnic origin, colour, mental or physical disability or sexual orientation, or gender identity or expression despite the fact that this goes against the teachings of the Prophet Mohammad?

Is Prime Minister Trudeau giving Imam Guillet the right to freedom of conscience; elevating multi-culturalism/diversity over his cherished Liberal values? Has the former Imam been given permission to vote against any of the values that the Prime Minister holds sacrosanct?

I think we need to hear from Imam Guillet and the Prime Minister.