The enemy of my enemy is not my friend: It is an unholy alliance 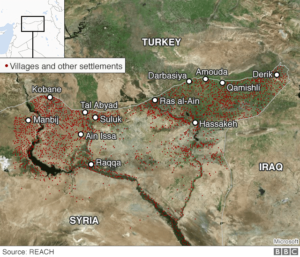 The enemy of your enemy is not your friend. He may use and abuse you for a period of time, but then will throw you over.

The West is involved in the Middle East – not by design, but by acts of war. Sept 11, 2001 began the latest march. And what we need to learn from our actions there is that honour/shame cultures are dangerous. The ethic of all Muslim countries rests on vengeance; not justice and mercy. And vengeance is never ending. Aristotle wrote that memory is the scribe of the soul. Muslim memory calls for revenge. There are few real Muslim nation states. Most are tribes, not living well together. There is no sense of loyalty up the chain from family, clan, tribe to nation.

In the Muslim world, the Shia and Sunni do not get along at all. And that is putting it mildly.There are Hashemites and Alawites, Ibadi and Suffis who don’t agree on much of anything: except vengeance.

And so America enters the Middle East and can’t get out.  Who is a friend? Who is the enemy? I think it may depend on the day of the week. And, now, America is attacked for abandoning the Kurds, many of whom fought with them against the rise of ISIS.

A short history. Good luck. My head is still spinning from trying to follow all the machinations.

The most recent incarnation of ISIS began in 2011. ISIS launched an offensive on Mosul and Tikrit in June 2014. On June 29, ISIS leader Abu Bakr al Baghdadi announced the formation of a caliphate stretching from Aleppo in Syria to Diyala in Iraq, and renamed the group the Islamic State.

A U.S.-led coalition began airstrikes against ISIS in Iraq on August 7, 2014, and expanded the campaign to Syria the following month. On October 15, the United States named the campaign “Operation Inherent Resolve.” Over the next year, the United States conducted more than 8,000 airstrikes in Iraq and Syria. ISIS suffered key losses along Syria’s border with Turkey, and by the end of 2015, Iraqi forces had made progress in recapturing Ramadi. But in Syria, ISIS made gains near Aleppo, and still firmly held Raqqa and other strongholds… By December 2017, the ISIS caliphate had lost 95 percent of its territory, including its two biggest properties, Mosul, Iraq’s second largest city, and the northern Syrian city of Raqqa, its nominal capital. The Iraqi Prime Minister Haider al Abadi declared victory over the Islamic State in Iraq on December 9, 2017.

On December 19, 2018, President Donald Trump declared that ISIS was defeated and signaled his intention to withdraw all 2,000 U.S. troops supporting the SDF ( Syrian Kurds and Arabs) in Syria. But the SDF continued its offensive and in February 2019 launched the final siege on ISIS forces in Baghouz, the last holdout. Baghouz fell on March 23, 2019, formally ending the caliphate’s claim to any territory.

Now, the Syrian Democratic Forces (SDF, Syrians and Kurds) reached an agreement with the Iranian- and Russian-backed government of President Bashar al-Assad and further undermined the prospect of any continued U.S. presence in the country. The deal will bring forces loyal to Assad back into towns and cities that have been under Kurdish control for seven years. The SDF is working with Syria to push back against Turkey. Keep in mind, Turkish-backed Syrian rebels and America’s Kurdish allies were focused on fighting Turkey, and not the Islamic State.

Now, Kurds felt they had no choice but to turn to Damascus in light of what is called the “betrayal” of the United States. The Syrian government has its troops heading to the border area to assume control from the SDF and confront the Turks. Because of a Turkish invasion aimed at pushing Kurdish-led forces away from the border. Now, Turkey regards the Syrian Kurdish fighters that lead the Syrian Democratic Forces (SDF) as a terrorist organization because of their affiliation with the Kurdistan Workers’ Party, which has been waging an insurgency against the Turkish government for decades.

Has that cleared up anything?

But wait, Turkey is a NATO country. An ally. Yet Turkey is a full blown Muslim country whose values are diametrically opposed to the West. So America and the EU-(oh you-hoo where are you?) should be helping Turkey which is at war with the Kurds; well, some of them, and is at war with Syria, I think.

But, now, according to a Kurdish woman named Nowruz, “For the regime (Syria) to intervene and deploy its forces on the Turkish border is a comforting thought. If a deal with the regime is what it takes to stop these massacres, then so be it. At the end of the day, we are all Syrians, and the regime is Syrian, too.”

Got that. The Kurds are now Syrians. Loyal now to Assad. Who is in bed with Russia and Iran because Assad’s bloody 8-year long conflict within Syria wouldn’t have survived without the aid of Russia and Iran.

Before we carry on any further, let’s get some clarity about Syria.  It’s all about tribalism.

Despite Syria’s national slogans of “no sectarianism” and “no tribalism”, the Syrian regime institutionalized tribal and sectarian ties to maintain its control. The Regime’s policies towards national unity, through the homogenization of tribes and ethnicities have failed and these policies are feeding the conflict taking place inside the country. Apart from playing the sectarian card in his game of creating balances and gaining more allies, al-Assad has played the tribal card in the Kurdish region too. There is a big divide between the Arab tribes and the Kurds.

Now one might ask, where is the EU in all of this? Are they fighting with the Kurds SDF against ISIS? Great question.  “In Germany, one leading policymaker said the United States and President Trump had a “special responsibility” to the Kurds, who were a key partner in fighting the Islamic State.”  Norbert Röttgen, the chairman of the German parliament’s foreign affairs committee, wrote in an email. “As a consequence, U.S. credibility has been badly damaged and the regional stability is now at serious risk.” Not positive, but I don’t believe there are any German troops, there. Spain is concerned, but I don’t believe they have troops over there, either. The situation in Syria is “out of control,” according to Belgian Federal Prosecutor Frederic Van Leeuw. Didn’t see anything about their forces over there but they sure need them to stop attacks on Belgian soil. Now, France and Britain have some. Special forces.

French Economy Minister Bruno Le Maire said, “It is time that the European Union . . . becomes as military independent as possible, because one sees clearly in this situation that one cannot count on the wider world.” Ya think?

So who is this friend? The Kurds?

There are 30 million Kurds. There are Syrian, Iraqi, Iranian and Turkish Kurds. Over time, since the Sykes-Picot agreement between Britain and France which divided up the Ottoman Empire,the Kurds of the various nations have grown apart. “In Iraq, for example, the Kurdish leadership has developed strong relations with Turkey, which has become a principal source of investment and trade; while in Syria, the dominant Kurdish party, the PYD, is a sworn enemy of the Turkish government through its close links with the PKK, the militant Kurdish movement in Turkey that is now at war with the government. And within both Kurdish regions, the dominant parties  face strong opposition from a number of other factions.”