The failure of interfaith to stop antisemitism 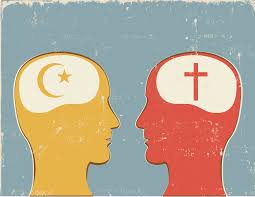 A rant.
I have participated in interfaith meetings. There is something wrong when religious groups overlook overt hatred. We are living in world where appeasement is not only accepted, but expected.
Evil history is repeating itself.

Cardus, a non-partisan, faith-based think tank and registered charity dedicated to promoting a flourishing society through independent research, robust public dialogue, and thought-provoking commentary and  Convivium which brings you news, commentary and research on issues affecting daily life for Canadians of all faiths, are organizations that promote interfaith. They are Christian/Catholic based.  It’s a lovely interfaith venture. Sadly it seems that these two organizations failed to learn from the Holocaust. Did not internalize the affects of antisemitism on Jews. That it kills.

Two Popes spoke up and asked forgiveness for their wilful blindness, their enabling of Jew hatred and the Holocaust. The Popes declared that the Jew-hateful prayers and sermons must be removed from the liturgy. They were. And just recently the Church of England  sent out an apology for their participation in the wanton murder of Jews for being Jewish.  “God’s Unfailing Word: Theological and Practical Perspectives on Christian-Jewish Relations,”

The 121-page report said attitudes towards Judaism over centuries had provided a “fertile seed-bed for murderous anti-Semitism,” and that Anglicans and other Christians must repent for the “sins of the past,” as well as actively challenge anti-Semitic attitudes or stereotypes.

Seems Catholics and Protestants are missing the hate right in front of their eyes. It’s the same hate, but, today, comes from Islam; it’s in their prayers. Calls for the eradication of all Jews. Prayers that demean and denigrate Jews and Christians. You can search for articles about these prayers on my website. dianebederman.com.

Instead of writing about the Jew hatred, the new antisemitism, from Islam, these two organizations are promoting “Christian Hospitality and Muslim Immigration in an Age of Fear.That’s the name of the book by the speaker they are promoting.

In this book theologian and ethicist Matthew Kaemingk offers a thought-provoking Christian perspective on the growing debates over Muslim presence in the West. Rejecting both fearful nationalism and romantic multiculturalism, Kaemingk makes the case for a third way―a Christian pluralism that is committed to both the historic Christian faith and the public rights, dignity, and freedom of Islam.

So where is their atonement, exactly? In Judaism we are taught about Tshuva. It’s a second chance. If you face the same fork in the road, choose the correct one this time. Show that you have learned. That you have repented. The primary purpose of repentance in Judaism is ethical self transformation.

Where is the Tshuva here? All that chest beating and renting of clothes when the truth came out about the 6 million Jews murdered for the crime of being Jewish while the world and the Pope watched.

And talk about an age of fear. Jews all over the world should be afraid. There are people calling for our eradication, again. Calling us apes and pigs, again.

The Muslims scream from their pulpits:kill the Jews, from Muhammad ‘s mouth. “It is narrated in the hadith that the Prophet (blessings and peace of Allah be upon him) said: “The Hour will not begin until you fight the Jews, until a Jew will hide behind a rock or a tree, and the rock or tree will say: ‘O Muslim, O slave of Allah, here is a Jew behind me; come and kill him – except the gharqad (a kind of thorny tree).”

Sound familiar? It should and it isn’t a secret. It’s loud and proud. Calls for the eradication of Israel. What do you think “Palestine will be free from the river to the sea” means? Or the purpose of the BDS movement, supported by the very same Churches who asked forgiveness for their participation in the mass murder of Jews.

But, no. These esteemed organizations are exploring the Western Christian response to Muslim immigration, unpacking Matthew Kaemingk’s “alternative political ethic of Christian hospitality and pluralism in an age of political fear and fragmentation.”

Here is another  link to the work of the speaker, Matthew Kaemingk.

THE HEADSCARF: ISLAM’S GIFT TO WESTERN DEMOCRACY: Learning to welcome Islam is a way to relearn what democracy is about.

Here is an excerpt from the article.

Islam’s entrance into the public square represents a critical opportunity for the renewal of Western democracy. Healthy democracies actually require the public presence and public voice of religion— even religions that challenge their democratic foundations.

Have I missed something? Or are the same people who turned their backs on the Jews in the last century doing it again? In the name of tolerance and inclusion and accommodation and appeasement.

Here is the invitation. You decide.

I hope that you have had a wonderful beginning to the new year. And with the start of 2020 comes an exciting event in the Hamilton area next week to help kick off the year with a bang. Dr. Matthew Kaemingk, winner of Redeemer University College’s 2019 Emerging Public Intellectual Award, will deliver the World and Our Calling lecture on January 22. I would encourage you to come hear Dr. Kaemingk speak on “Christian Hospitality and Muslim Immigration in an Age of Fear.”

Drawing on a wealth of research, Dr. Kaemingk will explore the Western Christian response to Muslim immigration, unpacking “his alternative political ethic of Christian hospitality and pluralism in an age of political fear and fragmentation.”

How can we as the body of Christ advance an ethos of deep pluralism and welcome in an age too often marked by division and difference? Read his 2017 article in Comment Magazine here.