The failure of journalism: the rise of a Fascist Trudeau and the fall of Canada 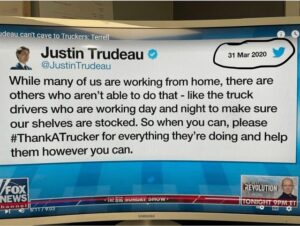 Mr. Prime Minister, what has happened since March 2020 that you have attacked the truckers?

An ethical journalist would have confronted the Prime Minister with this statement the day he went after the trucker convoy.

Rex Murphy, a journalist in Canada, wrote about journalism, today, in his article in December 2018: “Time is wrong.” Today’s journalists are not guardians of truth. “It has long since replaced the attempt to be objective with a commitment to activism and advocacy. Much of contemporary journalism does not report on the game. It sees itself as part of the game — it seeks to massage opinion, reinforce favoured perspectives, take down its “enemies” and shield its heroes.” He later wrote, March 30, 2019, that journalists “abandoned principle, journalistic ethics, and in some cases rationality.

Alan Bloom wrote “The most successful tyranny is not one that uses force to assure uniformity but the one that removes awareness of other possibilities…that makes it seem inconceivable that other ways are viable, that removes the sense that there is an outside.”

Now, more than ever, ethical journalists are needed to hold all government and their bureaucracies to account. But, something has gone terribly wrong and I have been watching this over the years. We are witnessing the devolution of journalism: the failure to ask questions. Nothing is more important than asking good questions of our political establishment to keep them honest.

It seems, today, that our journalists not only do not ask good questions, they don’t ask any questions if they may embarrass our PM Justin Trudeau. Their silence is leading to the rise of a fascist Trudeau and the fall of Canada.

Mr. Prime Minister, when you referred to non-vaccinated people as racist and misogynists and asked if these people should be tolerated, what were you planning to do with these people if it was decided that they should not be tolerated?

Mr. Prime Minister, you stated that the truckers had “unacceptable views.” What views were unacceptable? Please elaborate.

Mr. Prime Minister, on January 15 the world was opening up, removing mandates, why did you pick this day to change the rules for truckers who have been crisscrossing our country and crossing the border for two years?

Mr. Prime Minister, when you saw Canadians from coast to coast to coast converge in their trucks on Parliament to ask about this new mandate, why did you refuse to speak to them? To what end?

Mr. Prime Minister, Ottawa declared a national emergency three times: during the First World War to strip Ukrainian Canadians of their property and herd them into detention camps: during the Second World War so it could do the same to Japanese Canadians and during the 1970 October Crisis.  Can you please explain how a convoy of Canadians who were dancing and singing, feeding the homeless and shoveling the sidewalks is equal in danger to the previous implementations?

Mr. Prime Minister, how do you explain the visual disconnect between the armored cars, riot units, and armed officers perched on the roofs of surrounding buildings and the largely peaceful encampments from which the most notable offense over the course of the past three weeks had been loud and sustained honking?

Mr. Prime Minister, many provincial premiers told you they were against the Emergencies Act. Jason Kenney, the Premier of Alberta, announced that he was suing the federal government of Canada and you for their use of the Emergencies Act, calling the move “unjustified in the circumstances.” Premier Kenney took particular issue with the coercive measures imposed on financial institutions by the federal government. Those parts of the Emergencies Act that have to do with banking were “designed to interrupt terrorism financing,”  but they are instead being used to “seize and freeze” the assets of “people whose opinions they disagree with.”
How do you respond to these concerns?

Mr. Prime Minister, you accused Conservative MPs of standing with Nazis. But Melissa Lantsman is a Jew in the Conservative Caucus. Why did you not apologize to her?

Mr. Prime Minister, how do feel seeing Canadian flags flown all over the world in Freedom Convoys?

Mr. Prime Minister, the Ottawa Mayor wants to take the trucks of those who protested and sell them in order to pay for the police required to end the protest. This will harm not only the driver, but his spouse, his children, his animals. The family will become destitute and need the government to care for them. Such punishments not only rail against the Charter rights of these individuals but against international, human rights covenants and statutes that Canada is signatory to. These include the “International Covenant on Civil and Political Rights” and the “Rome Statute of the International Criminal Court” as reflected in Canada’s own “Crimes Against Humanity and War Crimes Act”.  Do you think people around the world will look at you and think of you as a vengeful leader? Does that bother you?

Mr. Prime Minister, how do you respond to Romanian Member of European Parliament (MEP) Cristian at the European Parliament in Brussels who said, “The prime minister of Canada, the way he’s behaving right now – he’s exactly like a tyrant, like a dictator. He’s like Ceaușescu in Romania.

Mr. Prime Minister, why did the Liberals circulate a list of opposition MPs they claimed had donated to the Freedom Convoy.

Mr. Prime Minister, emails have been revealed showing members of the RCMP sharing “troubling chat messages,” including laughing about the treatment of the indigenous woman who was run over by the police horse. How do you respond to this? Will there be any repercussions for those who participated in this heinous attack as well as those who made fun? What do you have to say to the indigenous Community?

Mr. Prime Minister, do you have anything to say about Tamara Lich being denied bail by a judge who was a failed Liberal candidate? Should she have recused herself?

Mr. Prime Minister, what are your views about the World Economic Forum regarding globalism?

Mr. Prime Minister I would love to hear your answers as would all Canadians who care about our quiet, freedom loving country.

“Journalists now see themselves as social justice warriors who are immune from the scrutiny to which they subject others.”