The sky is falling, run for your life, shelter in place – you fools! 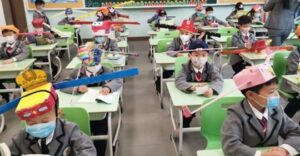 This is the way the world ends, not with a bang, but a whimper. ~ T.S Eliot

Two men and one Global organization managed to accomplish what two world wars could not, the near destruction of Western culture and the end of freedom. With the flick of a switch, millions of people peacefully gave up their freedom; yes, sir, no sir, anything you say, sir, because of a paralyzing fear of an invisible enemy, an enemy not clearly understood nor defined.

Our actions demean, denigrate and disrespect the sacrifice of millions of men and women who sacrificed their lives for our right to live freely and free from government overreach.

There is a reason for the statement in the Bible “Do not fear, for I am with you,” because fear takes away individual moral agency; free will, allowing others to rule over us. And it can take years to recover from that fear.

We allowed two men, Ferguson and Fauci, aided and abetted by the WHO, the propaganda arm of the Chinese government, who brought forth the Chinese Virus, to frighten all of us, especially our leaders, to shut down our economies and end our freedom of movement. Except for one country, Sweden.

Who are these two men?

Neil Ferguson who is affiliated with the Imperial College in London team, warned Boris Johnson that the quest for “herd immunity” could cost 510,000 lives, prompting a shut-down of Great Britain. In the world of mathematical epidemiology, Ferguson is renowned for his accomplishments, temperament, and work ethic. Yet his  “study was not peer reviewed; indeed, it seems not to have been externally reviewed at all. Moreover, the computer code used to produce the estimates in the study – which on Ferguson’s own admission is old, unverified and documented inadequately, if at all – has still not been published.”

Britain listened to a man whose previous predictions failed. “Ferguson had estimated that 2-7 million people would die from the bird flu.  The final tally was 455.  He compared the 2009 swine flu to the 1957 flu outbreak that killed more than a million people worldwide, but only a little over 18,000 died of the former. To his credit, he did accurately predict that the 2002 Mad Cow Disease outbreak would claim between 50 and 50,000 lives.  The total fell right within his range at 178.”

Ferguson had to retire from his lofty position when it was revealed that he had sex with his mistress, a married mother of two, who went home to her family, during his lock down. The man who said we must lockdown, didn’t. But we are still locked down.

Dr. Anthony Fauci is head of the organization the National Institute for Allergy and Infectious Diseases (NIAID) which gave $7.4 million to the scientists at the Wuhan Institute of Virology and other institutions for work on gain-of-function research on bat coronaviruses; understanding  the ability of a virus to jump from animals to humans. According to Richard Ebright, an infectious disease expert at Rutgers University, the project description refers to experiments that would enhance the ability of bat coronavirus to infect human cells and laboratory animals using techniques of genetic engineering. In the wake of the pandemic, that is a noteworthy detail.

Fauci publicly displayed Ferguson’s graph, the very same failed Imperial College Model, to persuade President Trump to shut down the hottest, strongest economy in the West. The model projected up to 2.2 million deaths in the United States.To date, there have been almost 80,000 deaths but 30,000, 38%, are in New York and New Jersey.  Of that eighty thousand, 25,000 died in elderly care facilities, 5300 in New York.  In other words, almost one third of deaths in America took place in elder care facilities, facilities that should have been easy to isolate and protect. But weren’t.

In a study published back in March 26th, Fauci wrote that the fatality rate was “considerably less than 1 per cent” due to the high number of asymptomatic and minimally symptomatic cases.  He noted that the outcome of this virus would probably be more akin to a severe seasonal influenza (0.1% fatality), or the flu outbreaks of 1957 and 1968. Yet, we continue to be lectured about social distancing, hand washing, and some amorphous “new normal” despite the failure of the models and the fact that world-wide the vast majority of deaths have been elderly people with underlying health problems.

I went to school during the years of fear over polio. Nothing was shut down. And polio killed and maimed children. This is not to demean the lives of the elderly. I am one of them. It is to put all of this in perspective. WE SHUT DOWN THE WEST, with hardly a whimper.

Remember when Donald Trump suggested that Hydroxychloquine could save lives? And remember when he was ridiculed by the all-knowing main stream media? On March 20 when asked if the drug was promising, Fauci, standing next to Trump, said “the answer is no” because “the evidence you’re talking about … is anecdotal evidence.”  But there were peer reviewed reports already published  by that day that approved hydroxychloroquine.

And then there were studies on chloroquine in 2005. Fauci, who has been director of the National Institute of Allergy and Infectious Diseases (NIAID) since 1984, had to know about the 2005 studies, indexed by the NIH’s National Library of Medicine and published in the peer-reviewed Virology Journal. The journal is produced by BioMed Central, a United Kingdom-based for-profit publisher. The study’s authors worked for the Centers for Disease Control and Prevention and the Clinical Research Institute of Montreal, and the study was funded by grants from the Canadian Institutes of Health Research.

“It was reported in 2005 that chloroquine had strong antiviral effects on SARS-CoV infection of primate cells. These inhibitory effects are observed when the cells are treated with the drug either before or after exposure to the virus, suggesting both prophylactic and therapeutic advantage. Severe acute respiratory syndrome (SARS) is an emerging disease that was first reported in Guangdong Province, China, in late 2002. The novel coronavirus and SARS have a 79% genetic similarity and use the same “host cell receptor,” meaning they infect people in similar ways.” So why not put a push on hydroxychloroquine when anecdotal evidence from respected doctors in France and New York showed great promise? More money to be made from a new drug?

So why did Dr. Fauci leave the President hanging in the wind?  Could it be Remdesivir?  Where were the ethical journalists?

Dr. Anthony Fauci recently said: “How many deaths and how much suffering are you willing to accept to get back to what you want to be some form of normality.” Great question. Has he thought about the “global depression that will devastate life expectancies in the less-developed world? Overdose deaths and suicides brought on by joblessness and loss of hope will rise, as more and more businesses fold permanently.  The profile of the average coronavirus decedent has not changed since it first emerged in Italy a month ago: 80 or so years old with serious comorbidities. Children are not at risk, yet schools almost everywhere in the U.S. remain closed, imposing a potentially lifelong handicap on the most disadvantaged.”

Meanwhile amid the coronavirus pandemic, American farmers are being forced to pour out milk, crush eggs, toss fresh fruits and vegetables, euthanize livestock and plow under perfectly robust crops. Financially beleaguered Americans are lining up at food banks in unprecedented numbers. Humanitarian leaders fear a global starvation pandemic is burgeoning. Where are the stories about those who are suffering? The working poor and poor? The small businesses dying? The children missing school and living in families that are falling apart? The media, as usual is MIA.

This is nothing less than a planned destruction of the west, whether it originated by accident or by design. No matter when this lock-down is lifted, the damage already done will affect two generations: our children and grandchildren. All these globalists out there will have to figure out how to feed the millions of children going hungry because of the disrupted, if not destroyed, food supply chain. They will of course be doing this at some lovely resort, sitting around together, dining.