Cain killed Abel.  God said to Cain, “Where is your brother Abel?”  Cain said, “I do not know. Am I my brother’s keeper?”  God said, “Your brother’s blood cries to me from the ground so now this soil shall no longer give you strength and you shall become restless upon the earth.” And Cain replied, “My sin is greater than I can bear and someone will kill me” God said, “I shall put a mark on your forehead so any would be killers will know your death will be avenged seven-fold.”

“Now go and smite Amalek, and utterly destroy all that they have, and spare them not; but slay both man and woman, infant and suckling, ox, and sheep, camel and ass.”  King Saul struck down Amalek as he was commanded but he then took mercy upon King Agag and upon some of the Amalekite animals. God and the prophet Samuel harshly criticized Saul for not fulfilling God’s word.

In cities around the world “Jews” defended and said Kaddish (“Rabbi” Leah Jordan  was proud to be the rabbi that led the British group in Kaddish prayer) for Hamas terrorists killed by the IDF as these terrorists tried to break the border between Israel and Gaza, in May 2018, leading up to the May 14 when the United States moved their embassy to Jerusalem.

By the rivers of Babylon, there we sat down, yea, we wept, when we remembered Zion.

We hanged our harps upon the willows in the midst thereof.

How shall we sing the LORD’S song in a strange land?

If I forget thee, O Jerusalem, let my right hand forget her cunning.

If I do not remember thee, let my tongue cleave to the roof of my mouth; if I prefer not Jerusalem above my chief joy.

It was a day to rejoice. But Hamas associated with Hezbollah in Iran; Iran who calls for the death of Israel, had the  Muslims fly kites into Israel with firebombs-burning the crops in Israel. They burned tires to hide infiltrators into Israel for the sole purpose of murdering Jews.

These “pseudo-Jews” were criticized by fellow Jews.

Jewish religious educator, Jake Cohen, responded to criticism of this action with the following statement:

Our tradition instructs us that on Pesach we should reduce our cup of wine to mourn the suffering inflicted on the Egyptians. A Midrash is told in my family at this point, that when G-d heard the angels celebrating the drowning of the Egyptian army in the sea, G-d declared “How can you celebrate? Don’t you see they are my creations too?”. When did we abandon this concept of Btselem Elohim, that we are all made in G-d’s image? When did we as a community decide to stop mourning the pain of the other, even our enemies?

He left out part of the Midrash. God, worried about the Egyptians coming after the newly freed Jewish slaves, drowned them in the sea as they tried to reach the Jewish people and kill them. GOD KILLED THE EGYPTIANS.  He said do not rejoice at their death for we are all God’s children. DO NOT REJOICE. He did not say to mourn over them.

Later in the History of  the Jewish people,  God, again worried about the survival of the Jewish people because of so much evil in the world, told Saul to kill every Amalekite. And their animals.

Amalek had ordered his people to kill the weakest of the Jews: the stragglers trying to flee Egypt. Amalek represents evil.

Amalek is the ultimate enemy of the Jewish people in history. This is the people that symbolize evil, and there is a commandment in the Bible to wipe them off the face of the earth, because their pathological hatred for Jews is so great, if they have a chance they will wipe the Jews off the face of the earth. Amalek’s major ambition is to rid the world of the Jews and their moral influence and return the planet to idolatry, paganism, and barbarism.

The Prophet Samuel orders King Saul in God’s name: “Now go, attack Amalek, and proscribe all that belongs to him. Spare no one, but kill alike men and women, infants and sucklings, oxen and sheep, camels and asses!” (I Samuel 15:3)

Saul could not do it. He was human. He was filled with misplaced mercy.

Why do we say Kaddish?

Early liturgical works such as Mahzor Vitry and Sefer Hapardess (France, ca. 1100) interpreted the Kaddish to mean that we must blot out Amalek. Thus, the Jews who were aware of these interpretations blotted out Amalek repeatedly every day!

“And looking at Hitler and the Holocaust we can understand that such intense hatred as the Bible ascribes to Amalek can exist in the world. The Nazis wanted to kill every Jew. A Jew could have been assimilated, intermarried with Christians for three generations but that didn’t matter; the Nazis were bent on killing anyone with the slightest bit of Jewish heritage ― they were bent on wiping out any trace of the Jewish people and Jewish influence.”

In Saheeh Muslim (2922), it is narrated from the hadith of Abu Hurayrah that the Messenger of Allah (blessings and peace of Allah be upon him) said: “The Hour will not begin until the Muslims fight the Jews and the Muslims will kill them, until a Jew hides behind a rock or a tree, and the rock or tree will say: O Muslim, O slave of Allah, there is a Jew behind me, come and kill him. Except the gharqad (a thorny tree), for it is one of the trees of the Jews.” 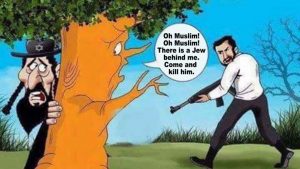 We are back to the beginning. When God created. It is time for all of these “Jews” to be named and given the Mark of Cain. We should recognize them everywhere until the end of time. They must not be physically harmed but remain, through eternity a reminder of all that must be blotted out.

It takes many people to protect the State of Israel and the Jewish people. I want to thank Yochy Davis for her courage and fortitude. See is the warrior woman in Britain. May all of us be like this Woman of Valour. Watch her in action.

Sergeant Ronen Lubarsky, was a combat soldier from the “Duvdevan” Commando Unit, and was severely injured during an operational activity in Judea and Samaria on Thursday, May 24th, 2018 when a Palestinian dropped a marble slab on him from above.

May his memory be a blessing.

Glorified and sanctified be God’s great name throughout the world

which He has created according to His will.

May He establish His kingdom in your lifetime and during your days,

and within the life of the entire House of Israel, speedily and soon;

May His great name be blessed forever and to all eternity.

Blessed and praised, glorified and exalted, extolled and honored,

adored and lauded be the name of the Holy One, blessed be He,

beyond all the blessings and hymns, praises and consolations that

are ever spoken in the world; and say, Amen.

May there be abundant peace from heaven, and life, for us

and for all Israel; and say, Amen.

He who creates peace in His celestial heights,

may He create peace for us and for all Israel;