The Toronto Star’s 4 page article to exonerate Ayman Elkasrawy is filled with errors in fact and the gross omission of facts. I have sent many media inquiries to the Publisher, John Bolton; Bob Hepburn media inquiries; Kathy English, public editor and Jennifer Yang, the reporter.

There has been nothing but silence. The banality of evil.

On October 22, 2017, the Toronto Star dedicated four pages, including its front page, in an attempt to exonerate Ayman Elkasrawy, an imam at “Masjid Toronto” mosque, from anti-Jewish and anti-infidel prayers during Ramadan 2016.

The following are excerpts from the article:

“After the story broke, Masjid Toronto took all its videos offline but it was too late; a new, edited clip was posted on YouTube… [The] Rebel jumped on the story about Elkasrawy’s prayers… In a video segment, “Rebel commander” Ezra Levant plays the YouTube clip while imploring his viewers to “look at what the folks inside the mosque were saying”… The YouTube clip was particularly troubling for Arabic sociolinguist and dialectologist Atiqa Hachimi, an associate professor at the University of Toronto. This is because the clip was digitally manipulated: the first two seconds were cut and pasted from a different prayer Elkasrawy had made two minutes earlier. A slanted translation then transformed this Quranic verse from “Thou art our Protector. Help us against those who stand against faith” to “Give us victory over the disbelieving people.” “It changed their meaning in such a way as to promote the dangerous myths that violent extremism and hate are inherent to Islam,” Hachimi said.”

The Toronto Star alleged that the short video clip that was broadcast on The Rebel by Ezra Levant:

All allegations made by The Star in this regard are not true. The Rebel’s video clip was not “manipulated” but edited to remove irrelevant lines.

“The original videos were embedded in CIJnews with no editing, manipulation etc. They were available till Masjid Toronto YouTube Channel was deleted… CIJnews translation was mainly based on Islamic sources (see my previous email and below).”

Lt Col. (Ret) Jonathan Halevi’s translation on CIJnews site of the Quranic verse in question was based on credible Islamic sources and is accurate. The article: “Why doesn’t the Toronto Star correct and apologize for its front page #FakeNews article?”  showed that Halevi’s translation of the line in question; “Give us victory over the disbelieving people,” is supported by leading Islamic organizations and scholars in Canada.

Media inquiries containing a wealth of evidence supporting Jonathan Halevi’s translation were sent to the Toronto Star and its five experts. The Star and four experts never responded to contest the overwhelming evidence or to defend their original position. One claimed that the Toronto Star didn’t ask for an opinion regarding this line. (See HERE)

Here is the text of the prayer in question that was recited by Ayman Elkasrawy on July 4, 2016:

NOTE: The Italic and underlined lines and the “Ameen” chants by the congregants were omitted by Jonathan Halevi in his original article. Following journalistic standards, Halevi marked the missing lines with an ellipsis and enclosed the original and unedited video to the article. The Rebel’s short clip did not include the Italic and underlined lines.

Here is the English translation of the prayer by Lt Col. (Ret) Jonathan Halevi (based on Islamic sources):

You are our Protector and give us victory over the disbelieving people. [congregants:] Ameen [declaration of affirmation]

Our Lord, let not our hearts deviate after You have guided us and grant us from Yourself mercy. Indeed, You are the Bestower. [congregants:] Ameen.

O Allah, Controller of the hearts make my heart steadfast in Your religion. [congregants:] Ameen.

O Allah, Controller of the hearts and minds, direct our hearts to Your obedience. [congregants:] Ameen.

And those who say, “Our Lord, avert from us the punishment of Hell. Indeed, its punishment is ever adhering; [congregants:] Ameen.

Indeed, it is evil as a settlement and residence. [congregants:] Ameen.

O Allah, forgive us and our parents of our sins. [congregants:] Ameen.

O Allah, have mercy upon them as they brought us up [when we were] small. [congregants:] Ameen.

O Allah, protect the youths of the Muslims. [congregants:] Ameen.

O Allah, protect the girls of the Muslims. [congregants:] Ameen.

O Allah, grant them with a righteous offspring. [congregants:] Ameen.

O Allah! Give victory to Islam and raise the standing of the Muslims. [congregants:] Ameen.

And humiliate the polytheism and polytheists. [congregants:] Ameen.

O Allah! Give victory (help) to your slaves who believe in the oneness of Allah. [congregants:] Ameen.

O Allah! Give them victory over the criminal people.

O Allah! Destroy anyone who displaced the sons of the Muslims. [congregants:] Ameen.

O Allah! Purify Al-Aqsa Mosque from the filth of the Jews! [congregants:] Ameen.

O Allah! Purify Al-Aqsa Mosque from the filth of the Jews! [congregants:] Ameen. 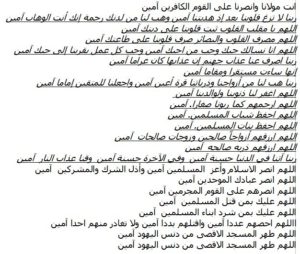 Given the fact that Jonathan Halevi’s translation of the line in question is accurate (see above), please explain in what way skipping the irrelevant segment “changed their meaning in such a way as to promote the dangerous myths that violent extremism and hate are inherent to Islam” as it published by the Star?

Why did The Star appear to accept (or at least refrained from contesting) Atiqa Hachimi’s allegations about the video being “manipulated”?

Did the Star independently examine the text of the entire prayer including the omitted segment?

Based on the text of the prayer presented above can The Star defend the statements in the article that strongly suggest the video was “manipulated”?

Why does The Star insist on refraining from answering all my media inquiries that contain simple and fair questions about its credibility and journalistic standards?

Why does The Star keep republishing the false and potentially defamatory article even after being proven again and again as inaccurate, misleading and even false (fake news)?

No one dared disturb the sound of silence